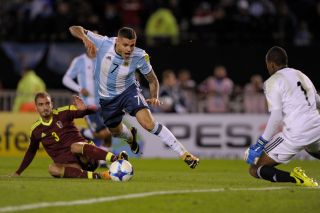 Regardless of what you think of his off-the-pitch life, when Mauro Icardi is locked in, he’s an elite striker.

Now that the 27-year-old will remain with Paris Saint-Germain permanently, expect for him to be more comfortable knowing that his future is in Paris. In his first season with Les Parisiens, Icardi piled up 20 goals in 31 total appearances.

Although the majority of his goals came during the first half of PSG’s season, it stands to reason that if the Argentina international can find consistency and stay healthy that he can surpass his career-high in goals (29) playing alongside some of the greatest creators in the game in Angel Di Maria and Neymar Jr.

When looking at the goals that Icardi can rake up, many will think ‘why doesn’t a striker of his caliber have more appearances with the Argentina National Team?’ Well, it’s a sticky situation.

There’s no real truth to this, it’s more of a conspiracy theory, but it isn’t a wild one to believe. Nonetheless, current Argentina National Team head coach, Lionel Scaloni, spoke with Direct TV (via TyC Sports), where he said that Icardi is in his plans.

“Icardi is still in our plans. He knows very well how things are. I spoke to him on the phone at the time when he was in conflict with Inter,” Scaloni said. “I explained that I was going to be left out because the others did play in their clubs. And after the Copa America (Lucas), Alario appeared. But Mauro (Icardi) is not ruled out. He is even at the right age to be a great scorer.”

Argentina is in a transition phase at striker with Gonzalo Higuaín being 32-years-old and exiting the prime of his career. Icardi will have competition with Lautaro Martínez of Inter Milan, but if the 22-year-old’s form is affected by a potential move to FC Barcelona, it could only leave Icardi.

With the Copa America next year and the World Cup in two years, the 27-year-old has a chance to play in meaningful international competitions for Argentina.