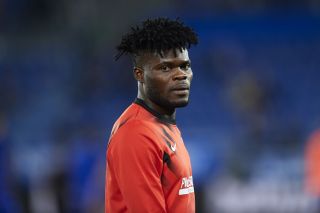 Aside from potentially spending large sums of money on Mauro Icardi, the next position that Paris Saint-Germain will likely pay a significant amount to is midfield.

PSG sporting director Leonardo has made it clear that a tall midfielder is at the top of the list when it comes to additions he would like to makeover the squad during the summer transfer window.

Lorenzo Pellegrini and Tiémoué Bakayoko are two names that consistently pop up, but the next name that could see more attention from PSG is Thomas Partey of Atlético Madrid.

Last month, RMC Sport journalist Mohamed Bouhafsi reported that Les Parisiens were showing interest in the 26-year-old. However, earlier this month, it seemed destined that the Atlético midfielder would head to England as the Ghana international told family members that he would like to join Arsenal FC.

After that, there wasn’t much chatter about Partey and PSG. Nonetheless, Bouhafsi remains adamant that there’s interest from the capital club as the RMC Sport journalist stated on a Periscope live stream (via Sport).

Bouhafsi continues to state that Partey “pleases PSG very much.” With an estimated release clause of €50 million, is it a price that the Ligue 1 champions will be willing to pay.