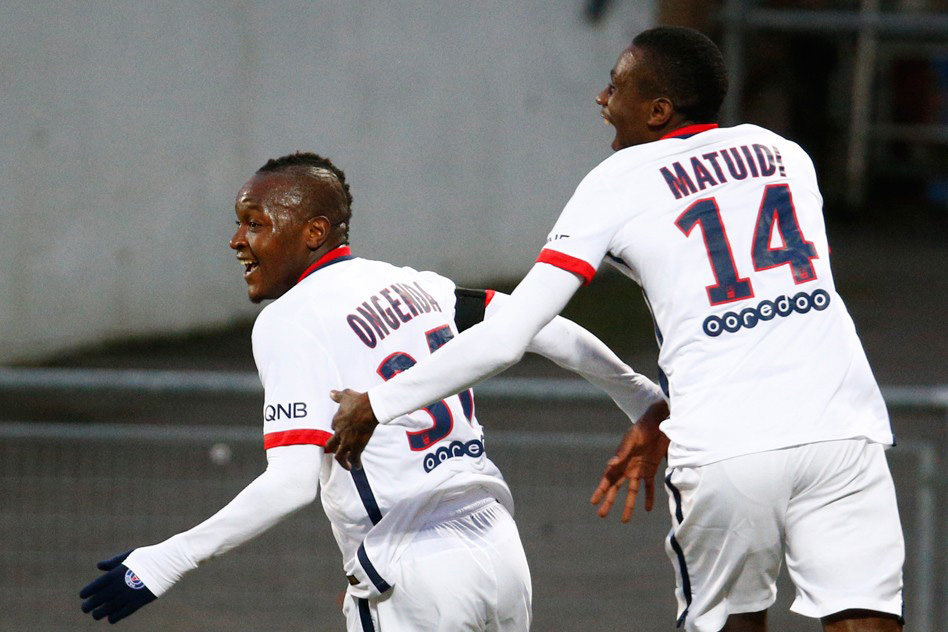 It was an emotional return to action for Paris Saint-Germain as they traveled to Brittany to take on FC Lorient. Wearing commemorative “Je suis Paris” shirts, PSG narrowly defeated Les Merlus 2-1 to move 13 points clear at the top of Ligue 1.

The first talking point of the match has to be the starting XI. With so many first team players unavailable, Laurent Blanc went out of his comfort zone and started PSG youth academy graduates Hervin Ongenda and Presnel Kimpembe. Ever since Kingsley Coman was sold to Juventus, Le President has been criticized for his handling of the younger players in the squad. Hopefully the positive performance of Ongenda today will encourage him to give more minutes to the next generation of PSG players. Also of note in the starting line-up was Zlatan Ibrahimovic. The striker single-handedly sent the country of Denmark into retirement and then made his 100th league start for PSG. Though Kimbembe was forced off by injury at halftime, with Blanc probably not wanting to risk a concussion after a collision of heads with Didier Ndong, his participation was commendable—playing a key part in the second goal—and he certainly showed that he’s good enough to start against Ligue 1 opposition.

PSG got off to their customary slow start to a Ligue 1 match but defended well against Lorient’s early attacks. The first goal came in the 26th minute when Gregory van der Wiel floated a teasing ball into the box for Ongenda. The 5’7″ winger found himself unmarked and lifted his boot and poked the ball past Benjamin Lecomte and just barely over the goal line. It wasn’t the prettiest of goals but it was his first ever league goal and will go a long way towards building his confidence.

Ongenda continued his stellar play and was the catalyst for PSG’s second goal just six minutes later. His pass to a sprinting Ibrahimovic was perfectly weighted and left the Sweden international with plenty of time to find Blaise Matuidi in the box for a simple tap in.

The Parisians didn’t cope nearly as well in the second half, though. The first half had been an encouragingly clinical one, with both Parisian shots on target being goals and both, arguably, coming against the run of play. That’s not to say that Paris should have necessarily gone into the half trailing—they did have 66 percent of possession after all—but two goals is generous for the general lack of creativity. PSG struggled throughout to maintain any sort of fluid attacking play. Ibrahimovic was constantly offside, not to mention visibly fatigued after playing his heart out for his country. By far, the best sequences of play from the away side came from movement in wide areas, particularly with the absences of the primary creators in midfield.

Lorient’s pressing only increased in the second half, particularly against an opponent notorious for taking its foot off the gas. Though they were limited to only one consolation goal, mostly thanks to the ever-imperious Thiago Silva and a solid defensive performance from Thiago Motta, concerns must be voiced, particularly when Ongenda departed and Blanc opted for a five-man midfield. With Adrien Rabiot pushed up further, Ibrahimovic trying to beat the offside trap, and Matuidi out wide, PSG further lost control of the game’s tempo. The win was certainly deserved, but Lorient at least deserved their goal.

In the end, the hosts had more shots on target, but most of their opportunities were outside the box. Lorient lined up in a very quick 4-4-2, but despite how rapidly they got forward, they generally lacked the inventiveness to break down their opponents at the back.

I realize it may sound I’m being overly critical of an injury-stricken, heavily-rotated side. I’m not, honestly; I think the performance was deserving of the win, and I’m absolutely over the moon about seeing two youth players enjoy a start. Frankly, I wasn’t sure if Ongenda even had a future here, and remembering how highly he had once been rated, it was nice seeing him thrive today. It’s simply that the negatives from this match are surprisingly helpful in understanding this side’s problems. The most glaring issue is how Blanc’s system utilizes wide areas.

With the typical starting XI deployed, Blanc enjoys packing the midfield. Maxwell, Angel Di Maria, and Ibrahimovic all drift deep and inside, chasing and retaining possession. It’s an intensely fluid system, with all the advantages that a fluid forward line offers. The interchanging attackers escape their markers, creating from all areas of the pitch and allowing Serge Aurier to play on the wing without being caught out. Unfortunately, the system has its flaws, particularly with the roles of Ibrahimovic and Edinson Cavani. PSG fans are well-acquainted with Matuidi and Cavani’s recent dip in form. In the case of the latter, it’s more that he’s lost his scoring boots. He ranked among the lowest in the side in terms of touches per game but somehow managed to pop up and score goals. That made him undroppable. As for Matuidi, there was a period where he single-handedly won matches with his incredible stamina and goalscoring potential. Both declined relatively simultaneously.

So what happened? Much has been made of Ibrahimovic dropping deep, and allowing Cavani to roam in the box as he prefers. The difference is the use of space on the left. Cavani is ostensibly deployed as a left winger but, as anyone who’s watched Di Maria switch the play to no one in particular has seen, he almost refuses to use the space on the left entirely. When he does use it, he’s largely ineffectual, since he’s not technical enough to be asked to cut inside and beat his man. Di Maria often abandons space on the right to come into the middle, but he has Aurier constantly overlapping behind him. Maxwell is too cautious to do the same, and while Kurzawa does offer a similar forward outlet, his skill set is still unrefined.

Matuidi will always bomb up the pitch, but Cavani’s role is either entirely central or back in midfield, trying to regain possession. What that does to the Frenchman is essentially restrict where he’s able to go. He’s asked to move up to try and utilize the left side, but that just forces him and the Uruguayan into the same pocket of the pitch. Neither possess the close control necessary to make that possible. In the first half today against Lorient, we saw Ongenda fill a very similar role to Cavani, but with Ibrahimovic a much more dedicated center-forward. That meant the youngster was allowed to move out of midfield and use the ball in wide areas, unlike Cavani typically would. That’s not to say he was always good at it, particularly spurning one great team move in the second half by putting in an awful cross, but the impact it had on the team was significant. For the first goal, wing-play led to Ongenda’s goal at the far post; for the second, the 20-year-old picked up the ball in a wide area and that allowed Matuidi to finally charge forward toward the middle and grab a well-deserved goal.

A far from perfect performance, of course, but one that Blanc must surely ruminate on when trying to shake two of his star players out of their recent malaise. That’s not to say that the short-passing ethos the team is built on should be abandoned; it’s good football, and it should be pursued. It would simply be mad to not address the very real problem that is nullifying some of PSG’s essential players, particularly when it comes to scoring goals. Whether that is ironed out or not will likely be seen in the upcoming Champions League tie against Malmö FF.