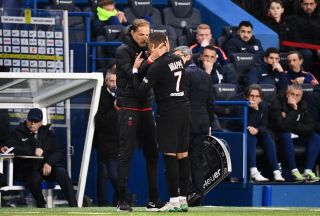 Video
Video: Mbappé Furious With Tuchel After Being Subbed Off Against Montpellier
By Ed - 1 February 2020, 19:04

Get ready for this incident to be talked about ad nauseam for the next few days.

In the 68th minute of Paris Saint-Germain’s 5-0 win over Montpellier HSC, manager Thomas Tuchel subbed off Kylian Mbappé and replaced him with Mauro Icardi.

The Frenchman was not too pleased, to say the least.

This isn’t the first time Mbappé has visibly expressed his frustration towards the manager after being taken off early. He did the same thing last December when PSG won 3-1 away at Montpellier.

As you can see in the video, Mbappé openly shows disrespect to the manager who is trying to explain his decision for taking him off. The 21-year-old tries to push past him while covering his mouth and talking over his manager. Then, he proceeds to stomp up the stairs and sulk in the chair on the bench. I guess the only thing worse would be if he stormed down the tunnel.

Mbappé is a fantastic player and maybe this is his “Mamba Mentality” coming out, however, he cannot do this with the world watching. It only fuels speculation that he wants to leave Paris and creates a distraction, something he’s said in the past he doesn’t want to do now that “it’s the money time of the season.”

PSG supporters get it. Mbappé is a highly competitive person who wants to win everything. However, he needs to understand that he will not win the Ballon d’Or because he scored a hat-trick against a 10-man Montpellier side. He needs to do that in the UEFA Champions League and all Tuchel is trying to do is preserve him so that he’s fit for the February 18 clash against Borussia Dortmund.

I’m not saying Mbappé can’t express himself, but he needs to be more professional and save these outbursts for the dressing room and not on the touchline with cameras all around.