After Thomas Tuchel was sacked from Paris Saint-Germain, former Tottenham Hotspur head coach Mauricio Pochettino became the new coach in the Parc des Princes dugout. Pochettino is an adaptable manager who moves between systems depending on the personal available and the opposition he’s facing.

In terms of style, Pochettino is possession orientated and looks to build out with quick incisive passes to his central midfielders. However, he is not averse to being more direct with his players spraying vertical passes to teammates further up the pitch in order to transfer defense into attack quickly. Out of possession, his teams set to press high up the pitch vertically and horizontally so that they can restrict the opponent’s play and aren’t able to launch attacks themselves. At both Southampton FC and Tottenham Hotspur, Pochettino’s press was well organized and structured efficiently.

This current PSG squad boasts world superstars with the likes of Neymar Jr. and Kylian Mbappé, so it’s fair to say they are a lot more talented than the squads Pochettino was accustomed to during his managerial career in the Premier League. However, inheriting this squad does come with some issues that need addressing urgently.

Firstly, the Argentinean needs to work out how to get the best out of his prized assets, Neymar and Mbappé. He must build a system that suits their playing styles along with maintaining the balance of the squad during decisive matches in the league and cup competitions. Poch should deploy his tactics immediately into this squad in which we will certainly see the set-up he had at previous club Tottenham.

Under previous manager, Thomas Tuchel, it often seemed that Mauro Icardi, Neymar, and Mbappé were being wedged into the 4-3-3 system, and often the patterns of play in the attack were far too reliant on the individual ability of Neymar and Mbappé too progressive when playing forward.

What System Should Pochettino Use For PSG?

Theoretically, the 4-2-3-1 is the best option as Marco Verratti will have a partner in the double pivot, most likely being Idrissa Gueye. Verratti is one of the best deep line playmakers in the division and European football – added with one of the best ball-winning midfielders, also in the league and European football. The pair would be best suited in this formation and will allow the front four players the freedom to express their quality on the pitch security of the double pivot in the front of the defense.

Alessandro Florenzi and Juan Bernat will occupy the full-backs and have the license to push on in the attacking phase, similar to Pochettino’s set-up at Spurs with Danny Rose and Kyle Walker before his move to Manchester City. Kieran Trippier replaced the departing full-back but lacked the pace to trouble opponents in the wide areas. Because of his quality on the ball, Rose was able to push further up on the left-hand side of the pitch whilst Trippier would tuck inside which gave Tottenham the added protection in defense during counter-attacks.

With this system, Verratti and Gueye would provide cover to allow the PSG full-backs to progress forward and overlap the wide attackers to create overloads in the offensive phase and pin back opponents for large periods. Having the extra cover maintains stability in attack and defense, a trait that was discovered as a common tactic Pochettino justified in the Premier League.

Marquinhos and Presnel Kimpembe will occupy the two center-half positions in the system. Both are very good one on one defenders and have the pace to play in a high defensive line, which will be needed in a Pochettino system to suit his pressing style. Also, with the two full-backs pushing forward, the center-backs will be tasked with defending one on ones in the channel which is where their pace and tackling abilities will be most important.

The Real Dilemma For a Coach at PSG 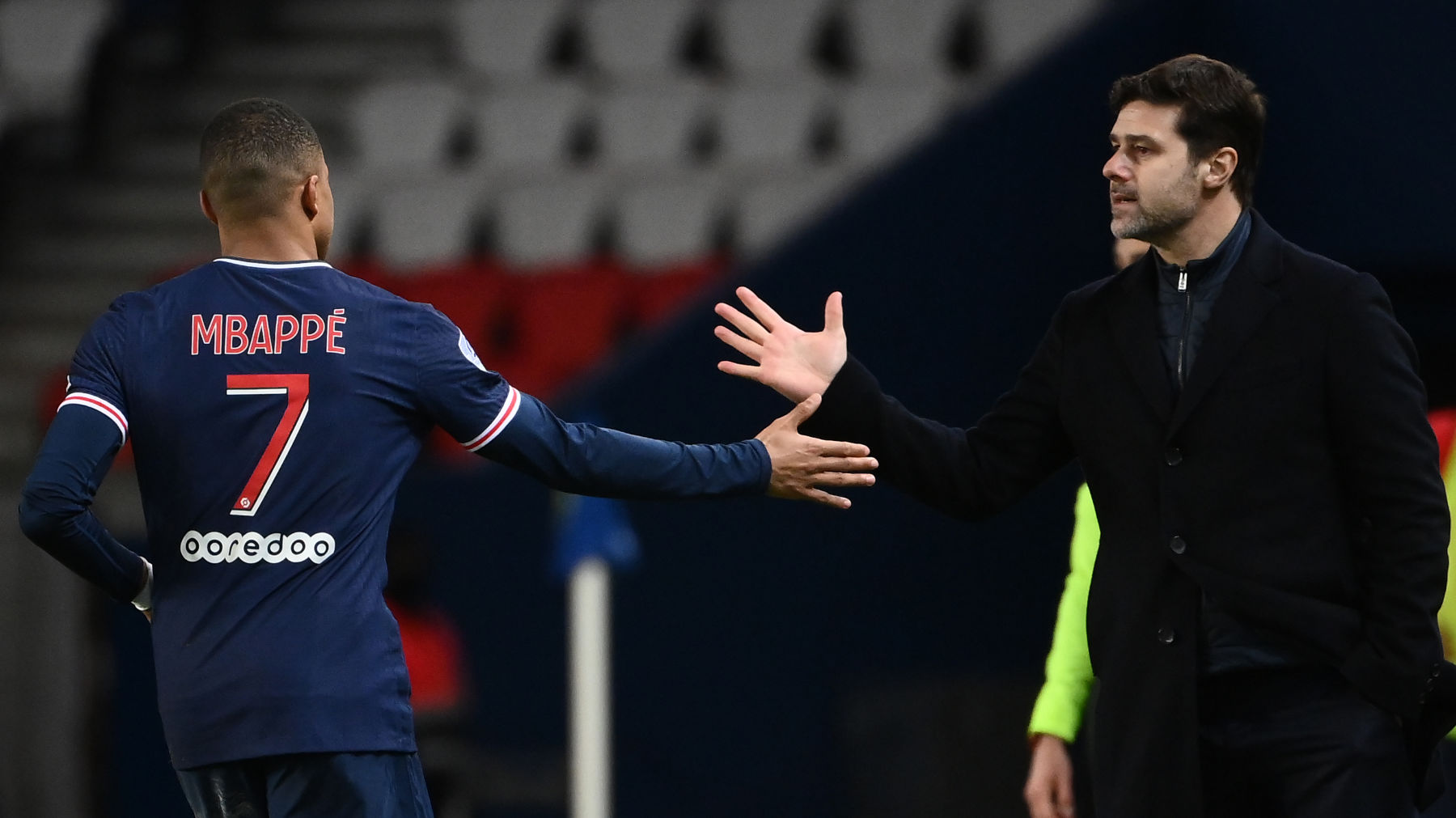 How to deploy the club’s superstars is a task Pochettino will have to overcome as soon as possible. The manager will have to accommodate two world-class players, along with maintaining the balance in the system he will outlay on his team. Neymar is at his best when he is given the license to roam. However, last season in the UEFA Champions League particularly, Tuchel was very lenient with the Brazilian’s positioning as the playmaker was dropping far too deep to get on the ball. An occurrence of this was the 2-2 away fixture against Real Madrid at the Bernabeu. Neymar would constantly receive the ball on the halfway line to begin an attack, whereas he should be offering his position further up the pitch in order to cause damage to Madrid’s defensive players.

In Pochettino’s system, Neymar should retain a higher position between the lines whilst also be given the freedom to wander into the channels. This will likely force the opposition’s midfielders to drop deeper where they attempt to close off the space where the Brazilian will want to operate in. Doing so will give Verratti and Gueye more space in this deeper midfield area.

Mbappé is best when he is able to play from either side of the lone striker, particularly off the right side. He can then stay high up the pitch and seek to make those runs in behind with his devastating pace that he possesses. Pochettino should deploy the Frenchmen from the right side and have Neymar play as a central attacking midfielder in the ‘Trequartista’ role. This gives him the freedom to float across the space in between the opposition’s midfield. On the left of the three attackers, Pochettino doesn’t have a superstar center-forward at his disposal, although Icardi is a worthy shout and has shown his worth during one full season at Parc des Princes. Under Poch, he will be tasked with playing the poacher role, sitting on the shoulder of the last defender, providing runs for the other attackers to find him in behind. Angel Di Maria and Pablo Sarabia are worthy candidates who can start wide and being able to move inside to allow the full-back (Bernat) to overlap down that flank.

The Tactician Who Doesn’t Shy From Change

In a 3-4-3, Pochettino would also have a squad that is suited to this system. In Kimpembe, Marquinhos, and Thilo Kehrer, all quick center-backs who are all suited to playing a high defensive line. Full-backs who are accustomed to change into this system and also have the speed to contrast from attack to defense. Along with Verratti and Gueye, Poch will also have Leandro Paredes, Danilo Pereira, and Ander Herrera who are all excellent alternative options to have in that midfield double-pivot. Mbappe and Neymar will be given more license to roam in this 3-4-3 system with the added defensive security behind them. This could defiantly be a system that the PSG manager reverts to, especially in tight Champions League fixtures.

Overall, Pochettino has a squad that meets his demands in a 4-2-3-1 or a 3-4-3 system. During his time in the Premier League, he has shown attributes of a top a level manager, especially at Tottenham. Now managing world-class talents like Neymar and Mbappé, we will be able to see if he is able to compete with the likes of Pep Guardiola and Jürgen Klopp when given the same amount of budget and technically gifted players to work with. The PSG board are always adamant a title should be achieved during the season, with the club behind Lille OSC in the division standings. But, another manager with his own system set-ups, there is optimism Poch can go one further than his predecessor and achieve European glory for the team from the French capital.