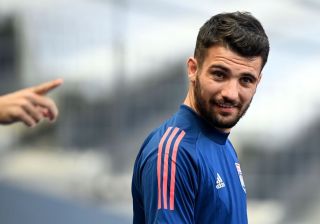 The stage is set for the Coupe de la Ligue final between Paris Saint-Germain and Olympique Lyonnais. PSG is on the heels of its Coupe de France final win over AS Saint-Etienne. Meanwhile, Lyon took part in several friendly fixtures to prepare for the cup final.

In his pre-match press conference, Leo Dubois (via Lyon’s official website) spoke about the team’s readiness after the long layoff in play due to the coronavirus shutdown.

“Such a long preparation is unprecedented,” Dubois said. “The organizations had to get back to work. We prepared our bodies well for the resumption of competition.”

Dubois knows that his side will be facing a PSG team in top form. He hopes that Lyon can pose a challenge to the reigning Ligue 1 champions.

“We know the qualities of this team,” Dubois said. “We have to prepare for a very, very high level match. We have to set the bar very high.”

PSG will be without star forward Kylian Mbappe. The Frenchman has been ruled out for three weeks due to an ankle sprain injury. Nonetheless, Dubois recognizes that this PSG side still has a number of world-class talents in both the attack and defense. For Dubois, the preparation and overall mentality for the cup final does not change.

“It doesn’t change plans but we know it’s a big strength of their team,” Dubois said. “There are other advantages to PSG. We will have to be focused, we are convinced of our qualities.”

A win for Lyon in the final will be among the biggest upsets in Europe this season.