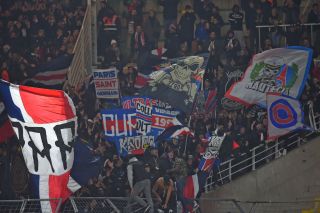 We may not know if Paris Saint-Germain will win tonight against Borussia Dortmund in the Round of 16 of the UEFA Champions League, but we do know that PSG supporters are undefeated when it comes to representing away from the Parc des Princes.

A lot of the talk surrounding the first leg of the tie has concentrated on the incredible Dortmund supporters and their famous Yellow Wall. As usual, not enough attention was paid to the traveling PSG supporters who have shown once again that they are a force to be reckoned with.

We saw their incredible support last season against Liverpool FC and Manchester United where they took over those cities and made their voices heard inside and outside those stadiums.

There have been reports that the PSG fans are being blocked from entering the Signal Iduna Park due to the use of firecrackers but hopefully, that situation can be sorted and we can have a proper atmosphere between two of the best supporters in Europe.

Le Parisien report that PSG's fans have been blocked by police on their way to the Signal Iduna Park owing to the use of firecrackers.