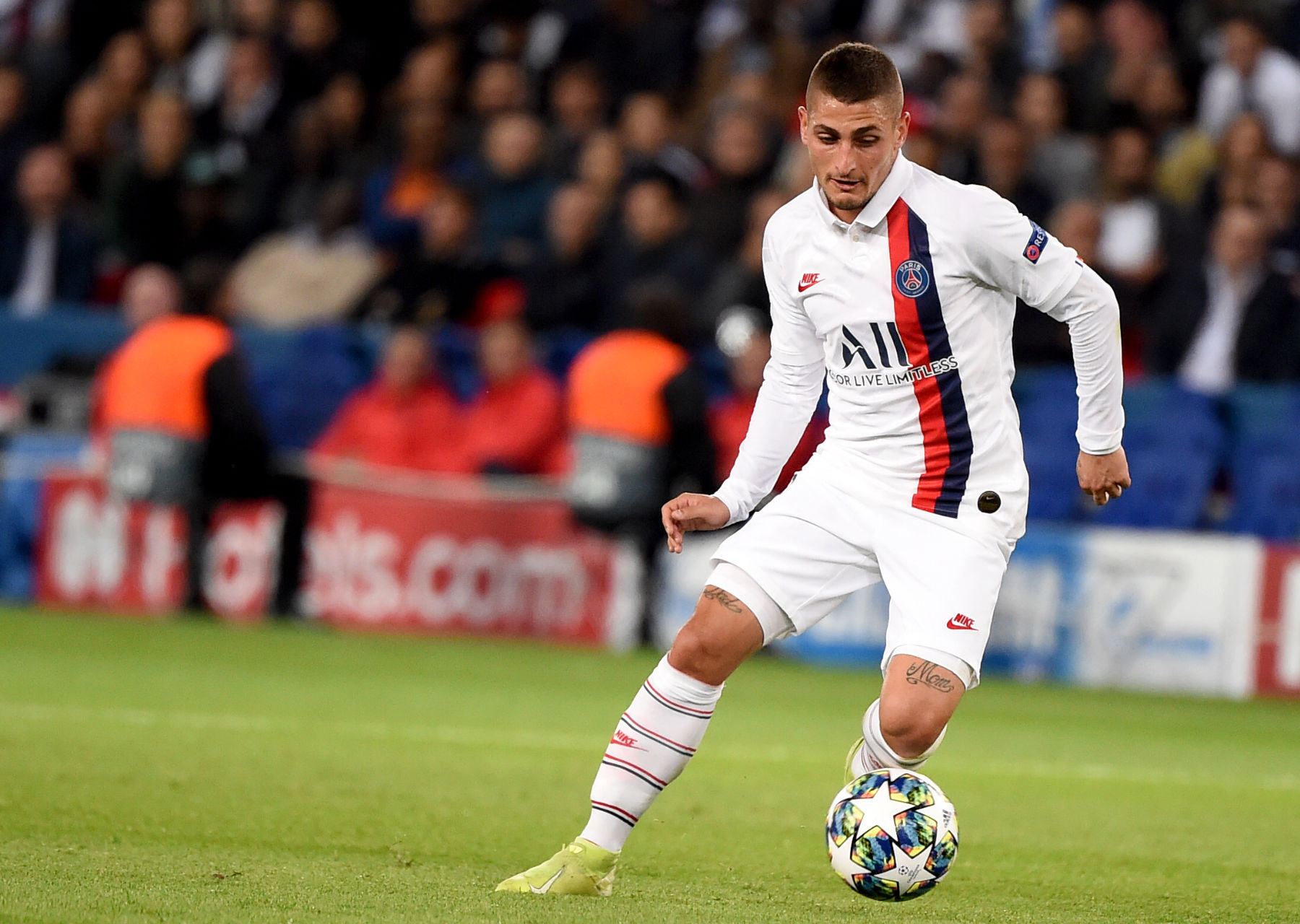 Very often, the use of statistics in football focuses on shots (and the goals resulting from them), key factors when analyzing the result of a match. There are now new statistics such as expected goals, allowing to explore the subject further.

But little research has been made on passes and the only common data we regularly see used is the key passes stat.

I am therefore continuing this series of new statistics based on passes and the passing game.

The first article in this series dates back from 2015 and I have hardly changed the intro text. However, the landscape of statistical analysis has well evolved over the past 4 years, but in the public sphere, passes remain the poor cousin of stats.

So today we’re going to talk about “dangerous passes”, not a great name for a stat that hides some interesting information. But let’s start by explaining what it is: I define a dangerous pass as a successful pass ending within 30m of the opponents’ goals and starting outside of it. The purpose is to identify passes that allowing a team to be in a position to shoot.

Why a 30m radius? Because it allows to include the box and the entrance of the box areas where many dangerous opportunities come from. The graph below represents the receiving locations of dangerous passes of the last two seasons and allows to visualize well this radius:

Graph 1: The passes starting and ending within this radius are excluded in this graph because what interests us here is the regularity with which the teams are able to get closer to the box. 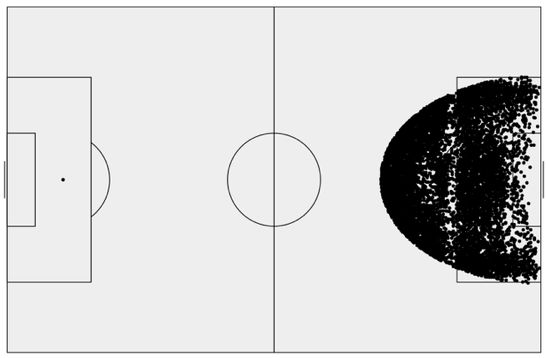 By using passes stats instead of shots, we allow ourselves to draw conclusions about a player/team more quickly simply because the number of passes per game is much higher than the number of shots. It also frees us from the finality of shooting. A team that manages to regularly reach the danger zone but lacks finishing has a better chance of scoring that a team that can’t reach it. Moreover, dangerous passes are strongly correlated with the Expected Goals stat.

Graph 2: Correlation between dangerous passes made and Expected goals (2018-19)

Now that this is clear, what are the possible applications? The obvious thing is to look at the best performing teams to predict future results. This season, Olympique Lyonnaise and Stade Rennais have been at the bottom of the dangerous pass rankings from day one but have fallen in the “real” rankings only recently.

This is what it looks like if you compare the last two seasons:

Ending in a 30m radius of the box: 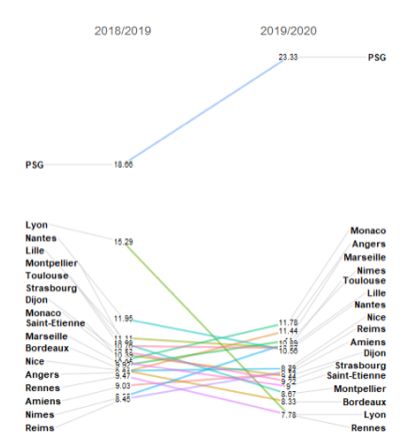 It is difficult to miss the fall of Lyon. These figures correspond to the criticisms of Lyon’s supporters about their team’s performance. And that led the club to let Sylvinho go.

On the other hand, Paris managed to make further progress in the attacking passing game.

Girondins de Bordeaux is rather poorly ranked and it would not be a surprise if they lower their attacking pace in the next few games.

AS Monaco seems to be improving the quality of its attacking game even if it still has defensive issues.

We can also look at the total number of passes over dangerous passes, a number that can highlight sterile possession.

Graph 4: Total number of passes over the number of dangerous passes 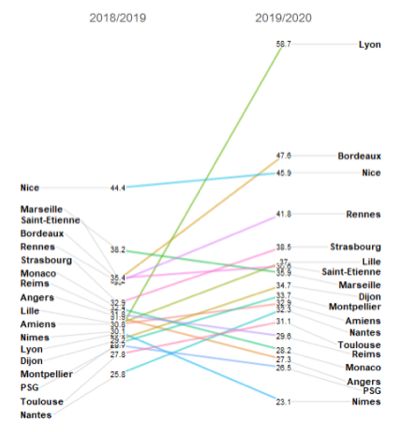 Lyon is also in a bad position here: They make a dangerous pass every 58.7 passes. No one is doing worse in the last two seasons, by far.

We also find Bordeaux, OGC Nice (usual suspects) and Rennes before a group of 13 teams.

Nîmes Olympique also stands out but in the opposite way. With one dangerous pass every 23.1 passes, they are the most “penetrating” team. But it also means that they do not use possession in a defensive role. It is one of the teams that has the least control of the ball this season.

But we can of course also explore the dangerous passes data focusing on the players. For example, here is the top 20 players of this early season (min. 270 minutes of play): 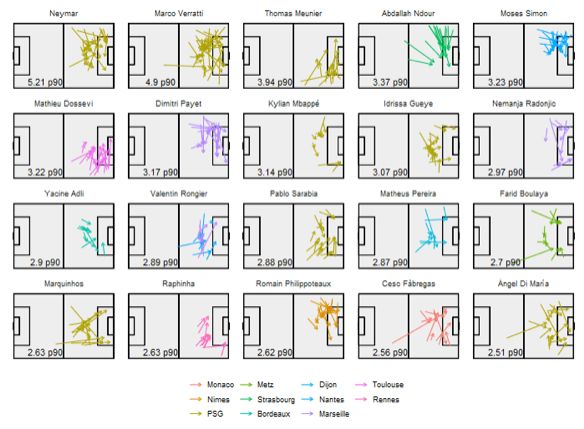 I appreciate the fact that a mixture of stars (Neymar Jr., Marco Verratti) and less flashy players (Ndour, Simon) appear here. But also that the paths to reach the danger zone are varied. Ndour multiplies the crosses, Adli makes short passes in the center of the field while Marquinhos is more likely to play long.

It also allows us to highlight players who are not necessarily directly decisive but who remain crucial to help their team progress on the edge of the box. Yes, Marco, this is you I’m talking about.

But let’s finish by zooming on the number one player in the dangerous passes: Neymar 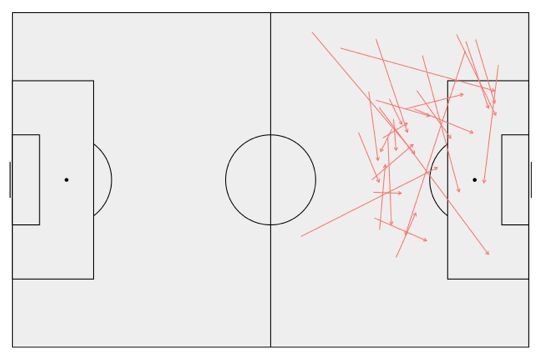 Video: ‘He Has a Very Important Mental Strength’ – Mauricio Pochettino Discusses the Retirement Comments Made by Neymar
14 October 2021, 20:00