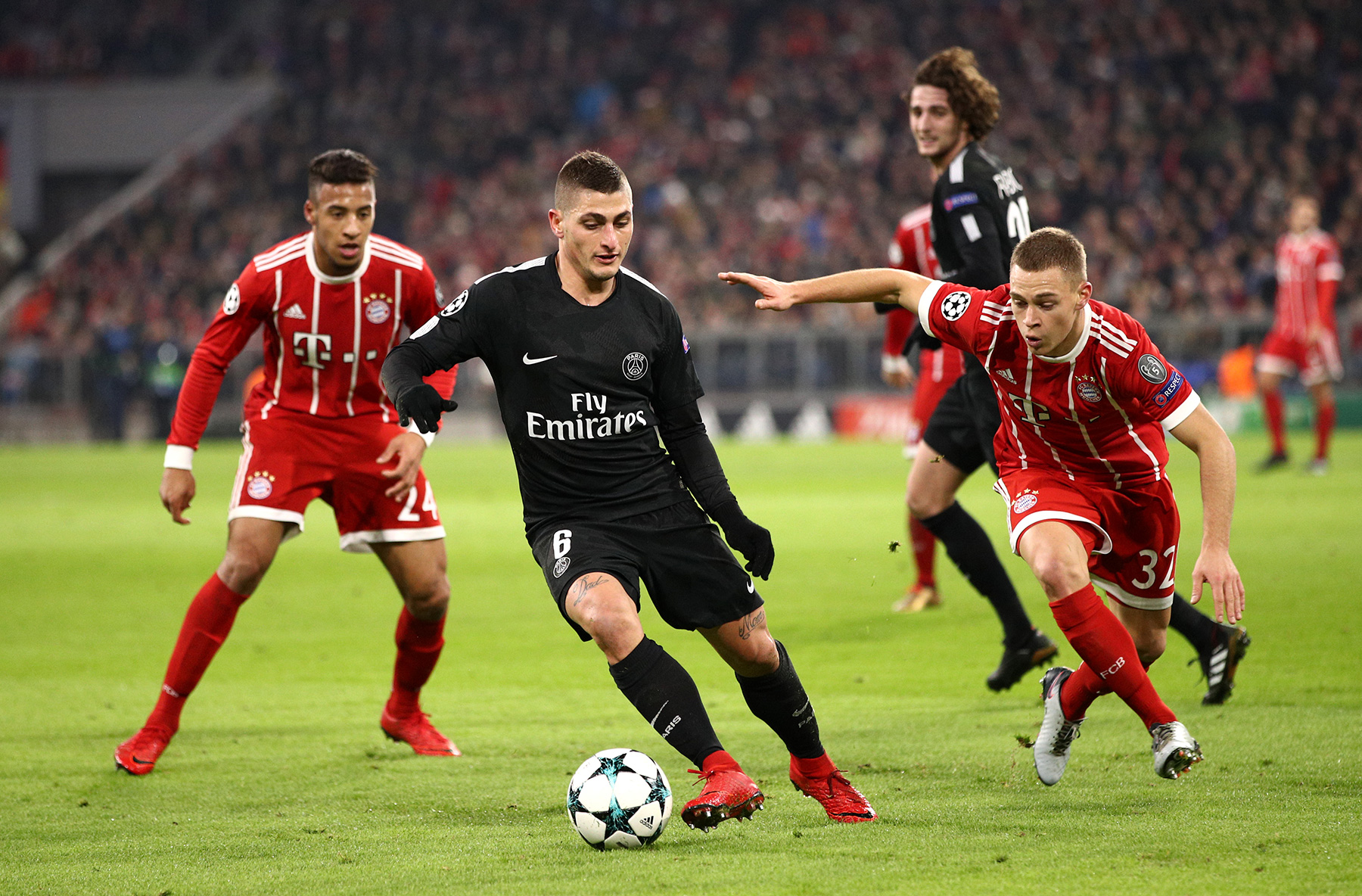 During the winter break, I took some time off work just as the players did and enjoyed the holidays with family and friends. I also went back and watched a Paris Saint-Germain match from earlier in the season because first and admittedly so, this is who I have become, and the obvious reason, Netflix hadn’t released season 4 of “Black Mirror” yet. The match that I revisited was the one against Olympique de Marseille from October 2017. Although Paris only came out with a draw (2-2), I thought this was their toughest matchup to date (FC Bayern Munich loss included), as Marseille threw everything they had at PSG.

An engaged Marco Verratti was on display throughout Le Classique and with a tightly played match on hand, and PSG down 2-1 after a goal from Florian Thauvin in the 78th minute, it was the Italy internationals work rate on defense and in the buildup play that kept the capital club in the match. With Paris down to 10 men after a laughable red card on Neymar Jr. late in the match, Verratti stayed calm when everything seemed to be spiraling out of control. Ironically, after the match, Verratti told reporters “If I had been in Neymar’s shoes I would have lost it 15, 20 minutes before he did.”

PSG must have been glad this wasn’t the case that night. Rather, Verratti had his footprints all over this match in a more positive manner. He led every player with an 11.2 possession percentage and 118 touches on the ball, with Adrien Rabiot coming in at a distant second at 89 touches. Verratti also led all players with 96 total passes with a 92 percent successful pass rating, as he dished out long balls into the box and through balls into tight spaces all match long. As in most of his performances, statistics don’t begin to describe the importance of Verratti. As Edinson Cavani rightfully received credit for rescuing the point in stoppage time with a stunning free kick, it was Verratti’s composer and relentlessness that was vital for Paris to get out of the Orange Vélodrome with a point.

There are three important aspects of Verratti and his style of play. These characteristics have been influential to his maturation as a footballer and have made him indispensable for Paris since his arrival in 2012. Rated as one of the top midfielders in all of football, Verratti is a fan favorite at the Parc des Princes because of his pit bull demeanor on the pitch. This facet of his game is the most transparent because it’s what most casual fans and pundits outside of France rave about when describing him. The tenacity and resolve he plays with at his small stature is something to be in awe of. In a position that requires strength and endurance, the former Delfino Pescara man, standing at a mere 5 feet and 5 inches, imposes his will through battles with men two times his size. There is no hesitation in his decision making when he challenges every ball that comes into his circumference. His low center of gravity allows him to intercept balls right off the opposing player’s feet at any given time. PSG boss Unai Emery in a pre-match presser in 2016 described Verratti as a player who “plays with heart”. Like the pit bull, Verratti’s tenacity and resolve mean that it’s difficult to change his mind once he decides to do something. This mentality from the Italian midfielder has seen PSG get out of tight spots in many matches.

A “pest” is defined as an organism that causes a nuisance to humans, crops and livestock. If you were to ask Ligue 1 players to describe Verratti, I am certain they would use words like “nuisance,” annoyance, irritant, or a pest. This aspect I have a love-hate relationship with. Sure, he is relentlessness in trying to win back every ball and stopping every counter-attack by any means necessary, like his infamously cynical booking against FC Bastia in 2016. He sometimes finds himself pushing the wrong people’s buttons in a pest-like manner, as this can be detrimental to his team on the pitch because the referee has authority here. Every match day you can rest assured you’ll see the Italian midfielder bickering at the referee and making wild hand gestures. Notably, the ‘ma che vuoi’. In this gesture, the fingertips of either hand are brought together, upright while the hand is waved up and down. It’s usually used to ask, “what the hell are you saying?” or “what the heck do you want?” in Italian. The French referees have gotten acquainted with Verratti since he now argues with them in fluent French, so they no longer tolerate much back talk. Verratti is as essential for Paris Saint-Germain as he is for the Italy national team and ahead of a second leg playoff match against Sweden that would decide the Azzurri’s 2018 FIFA World Cup fate, there was no Verratti on the team sheet. After receiving a yellow card late in the first leg, this meant Verratti would be suspended in that second match for accumulating too many cards. Maybe the Azzurri tactician at the time could have done something different during the match, but the absence of Verratti left him exposed in his decision making. The Italy national football team will miss the World Cup for the first time since 1958, and I’m sure Verratti wishes he had something to do about it rather than being booked and watching from the stands.

The nickname Gufetto, meaning Owl in Italian, is fitting for Verratti as he embodies many traits that an owl symbolizes and not to mention a similar facial physique. In the biggest season for Paris Saint-Germain to date, and the football world watching, Gufetto is having one of his best, and most comprehensive seasons as a professional. The Gufetto characteristic is my personal favorite of his because it speaks to his level of football IQ and how he processes the most minimal things for the duration of a match. I could rave about his owl-like vision, precision passing, and ball awareness, or his ability to keep his dribble going while shifting through the midfield with deceptive speed, or even his gritty defensive prowess and everything else that makes him world class, but this your already know. Seeing his name in the starting lineup is one of the most calming things for all PSG fans, and likewise for his teammates with his presence on the pitch. A certain confidence exists within the fanbase when Marco is playing because they know the midfield will have structure and stability no matter the outcome.

PSG president Nasser Al-Khelaifi made a mobster-like decision to have the Italy international essentially apologize for letting rumors about a potential move to FC Barcelona linger during the summer of 2017. The midfield maestro is significant to the UEFA Champions League aspirations of PSG. More importantly, the PSG front office is aware he is a hot commodity and understand they must be assertive in making it known they won’t allow him to simply walk out of Paris, and are willing to bully the bullies about it.

The arrival of Neymar saw Verratti get off to a slow start to the season, as he had to adjust to no longer being the key playmaker on the pitch. Since his return from a three-match ban after receiving his only red card of the season against Toulouse FC in August of 2017, Verratti has strung together an impressive stretch of performances. In the current Champions League campaign, Verratti is only second to Sevilla FC midfielder Éver Banega in completed passes (577-525). Amongst midfield players who have played in all six group stage matches in Champions League, Gufetto averaged an impressive 92 percent in passing accuracy, which came only second to his PSG teammate Rabiot; at 94 percent. It’s not surprising to see Rabiot in this category either. The partnership between the Frenchman and Verratti is one of the best in Europe and easily the most dynamic since the Qatar Sports Investments-era began in 2011. His work rate vibrates through to his teammates and inadvertently challenges them to raise their level of play. The maturity Verratti carries himself with off the pitch translates to the pitch tenfold. A maestro on the ball and wise beyond his age. The world-class talent may dissipate at some point in the future, but Gufetto will age well in the game of football and will be great for a long time because of his wisdom.