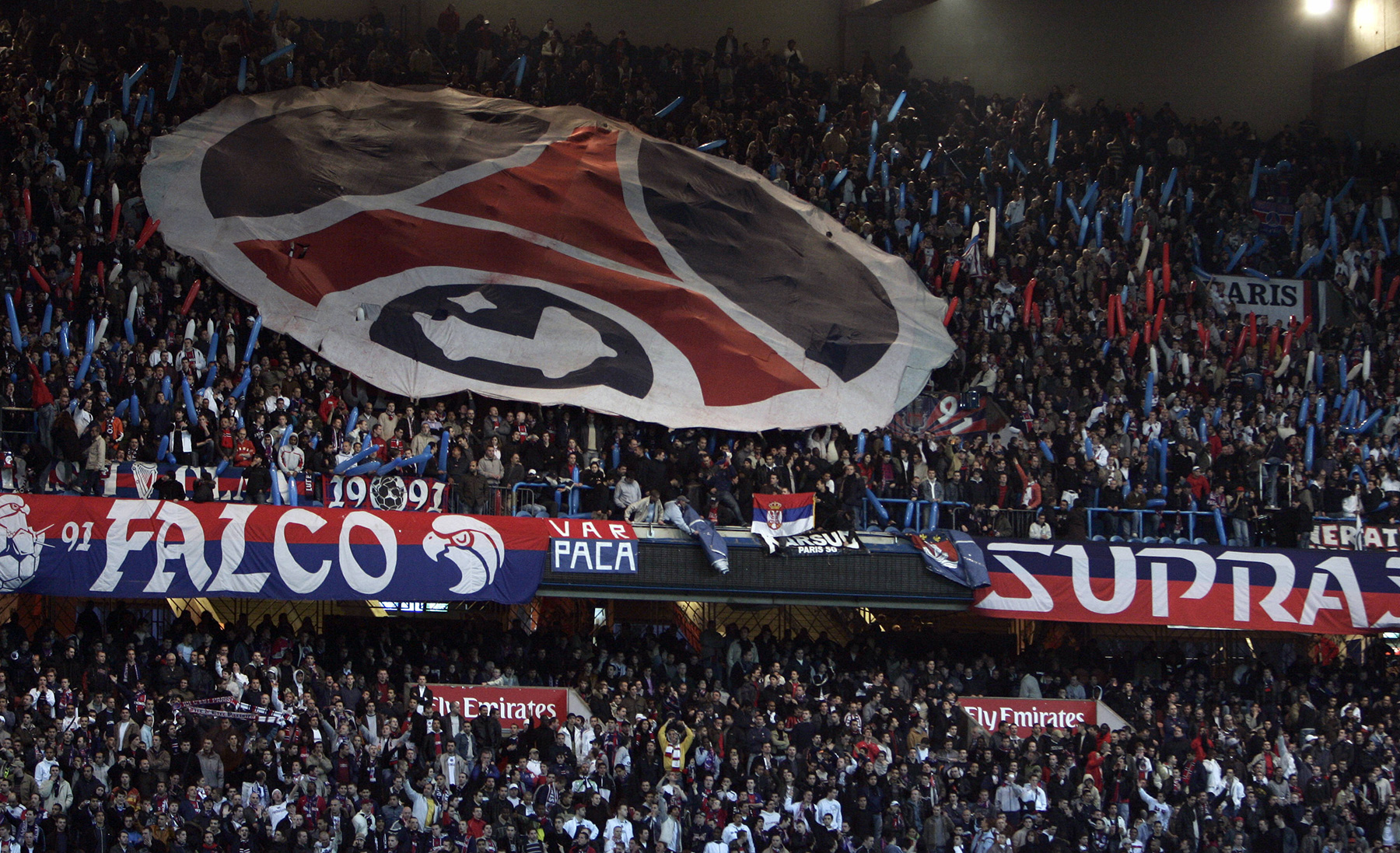 The Paris Saint-Germain brand is instantly recognizable all over the world but unlike other big football clubs, it’s exactly that, a brand.

When the PSG administration changed the logo in 2013, the differences were too subtle to be noticed to supporters in the stands or watching on television but almost instantly recognizable when compared side-by-side. Aside from a few aesthetically pleasing changes to the size of the rings and the design of the red Eiffel Tower, one of the most notable change was the removal of the date 1970 (year PSG was founded) from the bottom of the crest and replaced with “Saint-Germain” to make room for an even larger (and more marketable) “Paris” at the top.

The biggest change, however, was the removal of the traditional pram and fleur-de-lis under the Eiffel Tower, both of which are symbols on the town crest of St. Germain-en-Laye. The western suburb of Paris is currently home to the PSG Ooredoo and previously, hosted Stade Saint-Germain, a team that merged with Paris F.C. in 1970 to form Paris Saint-Germain.

These updates may have been made to modernize the appearance of the club and make it more marketable but for life-long supporters, it means much more than that. To explain how changes made within the walls of the Parc des Princes affect the perception of the club, I’ve chopped the issue into three separate parts:

How Did PSG Come to Exist?

To make a long story short, which is necessary when you’re trying to explain how two relatively unknown clubs merged together to form a new club that would go on to dominate French football and challenge for the UEFA Champions League in a relatively short period of time, this story will be somewhat simplified.

It all started in 1969 when the governing body of French football, the FFF, alongside the Mairie de Paris (Mayor of Paris) founded and laid the economic base for Paris F.C., a football club designed to relaunch footballing ambitions in the capital of France as the only professional football club at the time, Red Star F.C., was suffering heavily on a domestic and international level. The plan was also part of then Prime Minister Georges Pompidou’s visionary grands travaux (large-scale economic projects, similar to Franklin D. Roosevelt’s New Deal) to improve the tourism and commerce that comes with a big football club. For the first few months, Paris F.C. were very promising as they started out in the Championnat de France Amateur and worked their way up to the third division of French football. However, the club’s organizers, who at the time were high-ranking officials at the FFF, noticed a lack of cohesion between the players, training infrastructure, and supporter recruitment.

To solve the issue, the FFF decided to merge Paris F.C. with the Stade Saint-Germain, a 65-year-old CFA club who had a stable supporter group and multiple training facilities beside their home ground, the Camp des Loges, which remains the location of PSG’s training center.

So, in August of 1970, the FFF signed the agreement to merge Paris F.C. and Stade Saint-Germain to create Paris Saint-Germain. The new team would play their matches at the Parc des Princes, which was nearly completely rebuilt in 1972. 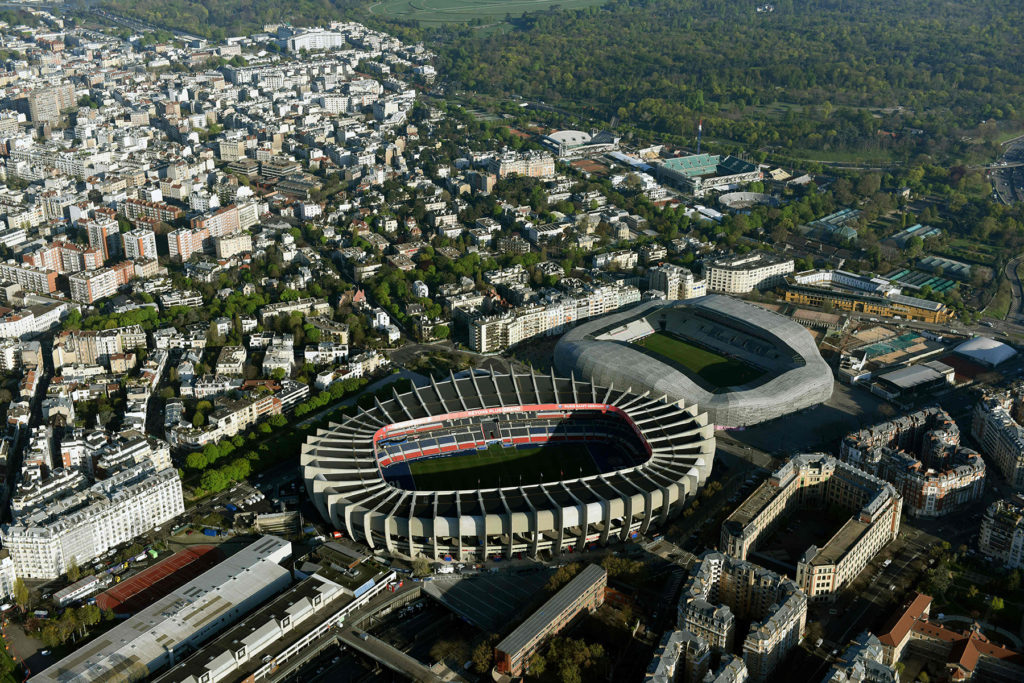 Since that point on, history writes itself, really. PSG gained supporters within the Paris and Ile-de-France region, who were now proud of their home, and built their club on rapidly accumulating domestic success, until in 2011, when they were bought by the infamous Qatar Sports Investments, whose objective was very simple: Turn a big club into a mega club.

In 2011, QSI bought a 70 percent majority stake in Paris Saint-Germain and in March of 2012, purchased the remaining 30 percent to become the sole proprietor of PSG. The objective was simple, in the short term they wanted domestic dominance and in the long term, European success.

Within months, QSI started to make their presence known by bringing in players like Jérémy Ménez, Salvatore Sirigu, Kévin Gameiro, Blaise Matuidi, Milan Biševac, Javier Pastore, Zlatan Ibrahimovic, and the enlistment of one of Europe’s most successful managers, Carlo Ancelotti. The new owners not only made an impact in France but they set their targets on the likes of Chelsea F.C., Real Madrid, Bayern Munich and other top clubs.

The club immediately found success, finishing second in Ligue 1 behind Montpellier HSC during the 2011-12 season before winningn the league four times in a row between 2012 and 2016. By 2013, PSG were a dominant force in the Champions League, reaching the quarter-finals of the competition four years straight. One can thus claim that all of this success must be due to the financial revolution at PSG, seeing as such a big upturn cannot be pure coincidence.

It wasn’t just on the pitch either where things were taking a turn as in the stands there was a change in the air—but perhaps not for the better. Whilst attendance figures were still hitting an all-time high, multiple players at the time noticed a significant change in the club’s atmosphere. Due to the “Tous PSG” plan, installed at the start of the 2010-11 season, tickets were limited in the Boulogne and Auteuil sections (behind each goal) and ultra groups were restricted from the grounds after numerous violent outbreaks. The atmosphere at the Parc des Princes was silenced and there seemed to be more spectators than supporters in the stands, which is sad because what was once a nightmarish away day for any team, is now a cultural holiday to a nice stadium in Paris.

There was also change inside the offices at the Parc des Princes, where between 2011 and 2016, many big decisions were taken such as the relocation of the club’s main training facility from the Camp des Loges in St. Germain en Laye, to a new, modernized training facility in nearby Poissy. Alongside the big logo change in 2013, the club’s 900+ employees working in St. Germain en Laye started to think more seriously about the future of the club and what direction the administration was planning to head in. The employees weren’t alone either, with more and more fans demanding supporter freedom and transparency from PSG management who appear shady at times and lack transparency.

When Paris Saint-Germain took the decision to change the club’s logo, popular French newspaper L’Obs wrote: “What the logo gains in simplicity and aesthetics, it loses culturally and historically.” Eurosport stated that “supporters grow more and more concerned with the club’s apparent separation with it’s identity and fanbase,” to which PSG officials replied,“PSG have no interest in disassociating with Saint-Germain as a club, and only see the current changes as an evolution”

The short answer is no. Time and time again, the Qataris have insisted that the logo changes, stadia refurbishment, and training center relocation is merely expansion, not disassociation from it’s past. The club’s training center will by moved but the 900 employees in St. Germain en Laye will remain, as the current training center will be used for more youth teams and for the women’s team.

The logo change was a “necessary evolution” in the club’s history, according to officials, and to reflect the club’s rich footballing heritage. And for the fans? Well, it seems like the ultras are back…for now. After successful discussion between the club’s administration, the CUP (Collectif Ultras Paris, responsible for representing and organizing the club’s many ultra groups) and the local police department, the first few ultras were allowed into the Parc for the match against FC Girondins de Bordeaux last month. PSG have expressed a great deal of interest for the return of more ultras in the Parc des Princes to recreate the sacred bond that Paris players and fans once had.

In conclusion, the future is bright for Paris Saint-Germain. What the administration may lack in transparency, they have recently made up for in action and ambition. The club’s domestic and international performances are now more successful than ever and while the club’s desire to achieve more can be mistaken for ignorance or vagueness, Nasser Al-Khelaifi and the rest of management have expressed their respect for the club on many occasions and only seem to want to do the club good, even if sometimes it is in disharmony with supporters.