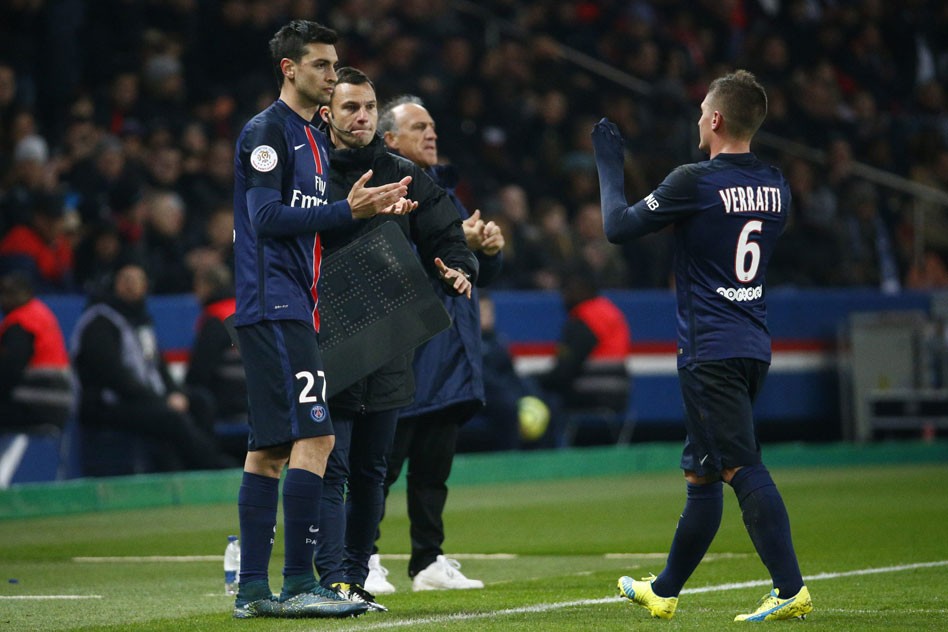 Like a phoenix rising from the ashes, Javier Pastore came off the bench to inspire a 2-0 win over a compact SC Bastia at the Parc des Princes.

Well, OK…maybe that’s a bit too much credit for the former Palermo man. That said, his substitute performance rather sums up the evening for the Parisians—a bit rusty, a bit labored, but eventually coming good. It was a solid display overall, if rather dull in the opening half-hour. Bastia perhaps could have troubled more if Seko Fofana were more clinical, but the only real worry came in the 70th minute as Kevin Trapp spilled a routine save and nearly conceded. Thiago Silva also came off for Marquinhos soon after a collision during a clearance, but it’s very likely that this was precautionary.

It’s fair to say that PSG jumped into gear after Thiago Motta poked home a loose ball from a well-delivered corner on the half-hour mark. The hosts had been sloppy up to that point – perhaps they just needed to be reminded of their stature. It is a credit to Bastia’s compact defending, though, that PSG were repeatedly forced wide. The front three of Lucas Moura, Zlatan Ibrahimovic, and Angel Di Maria were denied much room to work with and while the two wide men split off to create space, Ibrahimovic was largely muted throughout the 90 minutes.

On the bright side, this meant more time for Blaise Matuidi, for better or worse. The Frenchman was on the ball a lot, a threat going forward and a pest in defense, but arguably was not the best outlet. You have to wonder if he could have drifted out wide and allowed more space for Ibrahimovic or Fideo. Lucas stood out, perhaps not the most influential in terms of end product but able to accelerate immediately. He enjoyed his best moments in the #10 role, coming inside by beating a man or two and then presented with a golden opportunity to pass. Bastia defended the typical Parisian killer ball well, although Ibrahimovic can be blamed for being a bit too static in the box. This was especially apparent with a significant lack of movement from the Swede in reaction to Di Maria’s trademark crosses.

In the 39th minute came a collector’s goal from Maxwell—he scores when he wants—who found himself just isolated enough to smash it into the far post. A lovely strike, one which Di Maria created with a superb lobbed pass. Bastia did take a risk by forcing Paris out wide, but perhaps they weren’t expecting to have to mark the left-back.

PSG continued with more of the same after the break, with Marco Verratti and Motta—both superb—almost a double pivot at times to compensate for the Frenchman’s drive forward. Bastia defended well down the middle, despite a few comical mistakes in the box. Unfortunately the footage online is rather limited for this fixture, but one particularly amusing moment came when Matuidi attempted to backheel a pass meant for Di Maria…into Di Maria. It was rather harmlessly cleared. Another moment worth cheering for was Verratti’s first yellow card of 2016, a fantastically unorthodox drag-down. Truly the young Italian is the complete midfield package.

Pastore came on around the hour mark to the Parc’s jubilation, giving Verratti time to rest and reflect on his booking. Flaco had a rough start, immediately combining with his teammates to create an attack but disappointing with the final ball. That is to be expected when you haven’t played in three months, though. Indeed Pastore grew into the game, finding Di Maria wonderfully on two occasions and nearly finding Ibrahimovic in the box for a sure goal. A little bit more gametime and Javier will surely be back to his best. Given Matuidi’s occasional blips in form, this could be excellent news in midfield.

Ezequiel Lavezzi came on late, as well as the aforementioned Marquinhos. The latter barely had anything to do, but Lavezzi did slot in well, nearly bagging a goal. Fans might have reason for concern that Jean-Kevin Augustin hasn’t been given a chance to revive his form after a disappointing match against Wasquehal but the late cameo is hardly going to change the world. More significant is the lack of Edinson Cavani, who has been rested for quite a while now. Laurent Blanc may be looking at a serious change of approach up front—although it’s not likely that we’ll see big changes in the January transfer window. That said, judging by last season, if there’s one man who can return the Uruguayan to form, it’s Pastore.

A professional, if perfunctory victory. Truthfully, it’s more of a credit to Bastia for shutting the Parisians out in the second half. PSG now look to a much bigger game on Wednesday: the Coupe de la Ligue quarter-final against Lyon. It may be a cup match, but any game against Les Gones, even out-of-form, is bound to be big. We’ll see you then.