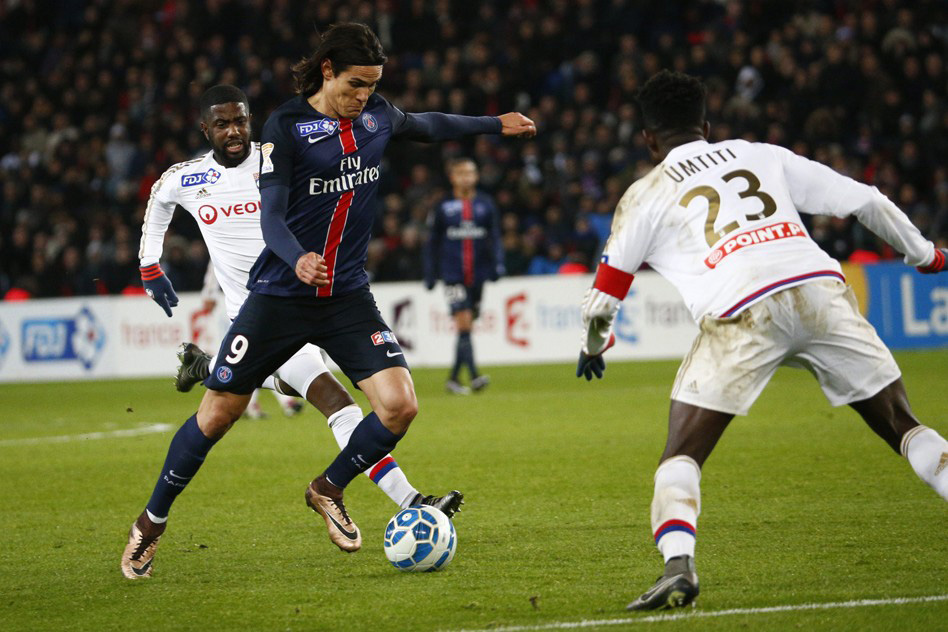 Referee Benoit Bastien and his team will not be the ones whose reputation is the most blemished by last Wednesday’s scrappy 2-1 win for Paris Saint-Germain over Olympique Lyonnais in the Coupe de la Ligue. That honor belongs to Edinson Cavani.

That’s not to absolve Bastien of any blame for the result, which advances PSG to the semifinals in the league cup. He and the other officials made several high-profile mistakes, most blatantly in the 17th minute as Adrien Rabiot scrambled home an obscenely lucky finish to put Paris up 1-0. Not only did the ball clearly cross the goal line for what should have been a corner kick, but Rabiot’s follow-up on Ezequiel Lavezzi’s deflected shot was offside. Neither Bastien nor the linesmen made the correct call. Thankfully for the referee, Laurent Blanc and Lyon manager Bruno Génésio played weaker squads and the match did not spiral out of control.

Lyon fielded a mix of youth and summer-transfer rejects. On Paris’ part, Salvatore Sirigu returned to the side along with a handful of welcomed defensive changes—including Marquinhos, who was left out of the starting XI against Wasquehal. Layvin Kurzawa was handed another chance with Gregory Van der Wiel fulfilling his usual deputy duties for undisputed first choice right-back Serge Aurier.  Up front, Lavezzi received the nod for only his sixth start of the season, playing alongside Cavani and Javier Pastore. The Argentine’s return to action will be a source of comfort for many supporters, particularly after an injury absence reaching back to last October.

However, after yet another disappointing first half performance from PSG, it’s hardly fair to blame rotation entirely. Cavani was anonymous as ever, and former Napoli teammate Lavezzi failed to do much other than win a few fouls. Pastore and Marco Verratti pulled their weight without issue, but Rabiot’s weak headed clearance gave Lyon a deserved way back into the game via Corentin Tolisso. Stambouli had a perplexing performance—not necessarily bad, but somehow offering more going forward than defensively. On a couple of occasions, the Frenchman could be confused for Pastore in an attacking midfield position.

Paris did not have many defensive worries across the 90 minutes, although David Luiz could be accused of a few lackadaisical passes. Sirigu perhaps could have done more at the near post for Lyon’s equalizer, but the shot was hit with enough power to beat most anyone. Marquinhos performed admirably, perhaps due to van der Wiel playing uncharacteristically deep. This allowed Kurzawa to get into some good positions—including one lovely in-the-box opportunity that was parried away at close range.

The main problem was with an attack the too often fizzled, particularly in the first half where the players seemed perpetually out of energy. Cavani and Lavezzi were both great beneficiaries of Pastore’s creative prowess last season, but it simply wasn’t coming off. El Matador was disappointing off the ball and squandered any potential moves with atrocious first touches. That’s when he touched the ball at all.

The introduction of Angel Di Maria and Lucas Moura for Benjamin Stambouli and Lavezzi changed the entire dynamic for the home side. Not only for sheer pace—Lavezzi has plenty of that—but for creative energy. Pastore and his Argentine compatriot were joyous in their link-up, and Rabiot-Verratti retracted at times into a double pivot. The lack of a natural holding midfielder did limit ball retention at times, but at the same time, the aggression in midfield was wonderful to watch. Lucas in particular, though not as involved across the field as Di Maria, continued his wonderful substitute form. He ran inside from the right with aplomb, eager to put a pass in and easily wiping away the memory of overly negative first-team football. Supporters of the perennially-young Brazilian will be happy that the left wing experiment seems to be over.

The two South American speedsters combined for a lovely counterattacking goal not long after coming on, Di Maria setting off on a brilliant run from a well-defended corner. Fideo tapped across to Lucas for his seventh goal of the season, and the embrace between the two was almost as sweet as the finish.

That said, Pocho will not be happy to have been subbed off in one of his few starts and rumors continue to swirl about a potential January exit. While the former Napoli man has given some solid years to the club, few would mourn that departure, particularly while PSG stand to earn some money from him. His contract is up in the summer but a paltry sum should be able to convince the club to cut him early. Jean-Kevin Augustin could very much fill the same gap.

Meanwhile, Cavani played another disappointing 90 minutes. No one should expect a January departure—UEFA Champions League cup ties virtually remove all possibility of a replacement, unless reported Parisian interest in Brazilian youngster Gabriel Barbosa comes to unexpected fruition. But for all the narrative about a quality player being forced out wide, the Uruguayan squandered yet another chance to show how he can play down the middle.

This is the second winter break running in which Cavani has been disciplined by Blanc. Last season he and Lavezzi were both removed from the side for returning late from vacation, a crucial show of intent by the manager despite an intense title race. While that episode definitely cast shadows on their long-term futures at the Parc, Zlatan Ibrahimovic’s absence and a magnificent showing from the Uruguayan in the tail end of 2014-15 seemed to spell the end for Cavani’s troubles. After a decent pre-season, Cavani dropped off form and now has been disciplined for bad behavior. The general belief as of now is that he left for vacation early due to a calf issue and this angered some members of the squad. Blanc has confirmed that there was a meeting of six senior players in Doha over the break. The meeting was supposedly not about Cavani but the topic came up—though Le President stresses that the only thing discussed was behavior, not performance.

7. Edinson Cavani made his first ever league assist for Zlatan Ibrahimovic this weekend vs SC Bastia.

It’s important to note that this two-year struggle between player and manager stems from the departure of Carlo Ancelotti to Real Madrid—the Paris No. 9 has none of the technical qualities that define Blanc’s side. Harsher critics will claim he has very little to offer in general, but it has become especially clear with the arrival of Di Maria that Cavani simply doesn’t fit. In the Argentine, Blanc finds his quintessential counterattacking man—quick, but eager to drop deep and float around the pitch. Di Maria’s ability to force the team to transition into attack is surely his biggest asset and yet he frequently ranks among the players with the most touches and passes. He’s an involved player, despite his route-one capabilities; like a more complete Lucas, essentially. Looking at the kind of player Lucas has been molded into helps shape this opinion. Cavani can play directly, but he’s not the sort to run at the defense—he’s there to receive a pass. It’s telling that he has assisted Ibrahimovic in league just once in his two years here.

His domestic goal record may be decent—of his 13 goals so far this season, 12 have come in French competitions, league or cup—but he has just one Champions League goal to his name from six group stage appearances. Cavani’s continental malaise has always been an issue, particularly against tough defenses like Chelsea or Real Madrid, but it really manifests now that he’s competing for a place against the magnificent Di Maria or even an in-form Ibrahimovic (not a man renowned for continental performance).

Two years into Cavani’s time at the club, it’s finally fair to say the fans are not scapegoating him. Some claimed that the Uruguayan simply didn’t have the time to settle in, particularly after a messy divorce and family issues in Uruguay. Unfortunately Cavani has never been able to win the hearts of the club’s fans entirely, perhaps in part because his struggles are so public. If he is unhappy, he makes it clear. The relationship between the Uruguayan and Le Rouge-et-Bleu has endured much strain, and while it may cool while he’s finding the net, his disgruntlement always seems to manifest itself on the pitch as well as off it.

The most recent of these dramatic episodes comes from Blanc, who has at last admitted that Cavani just doesn’t seem to fit the system. The manager stresses that while he understands the Uruguayan’s desire to play in a different manner, the squad is built around a certain system. He has a full complement of players who are happy in that system, and he cannot sacrifice that for the needs of one expensive forward.

This is an important breakthrough to be put so bluntly, as for the first time Cavani’s future at the club seems genuinely uncertain. Lavezzi is certain to leave this summer at the latest, and probably Ibrahimovic as well, barring a new contract. PSG is pulling the curtain down on the first era of the project, having now secured unassailable domestic dominance. The club wants a continental trophy and this summer will surely see more continental-tier players brought in. If Cavani simply cannot be reconciled with the team, there are many other clubs who would happily snap him up for not too hefty a loss—and that certainly seems like a possibility. The Champions League means his future is entirely secure for January—but come the summer, Edinson Cavani may be set to draw this troubled period in his career to a close.

Regardless, for now PSG will be eager to get started on a double-header against Toulouse away on Saturday, then again on Tuesday in a league cup fixture at home. The capital club will certainly hope to be more convincing in victory against the relegation-threatened side.