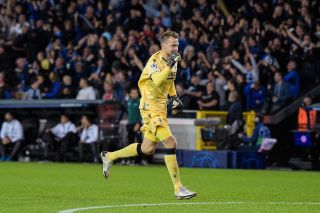 Although Club Brugge conceded the opening goal against Paris Saint-Germain, the Belgium side stuck to their game plan. Despite falling behind, they didn’t panic and eventually found the equalizer. Furthermore, there were instances where they had the chance to take the lead.

Following the 1-1 draw against the Ligue 1 side, Brugge goalkeeper Simon Mignolet spoke to RMC Sport, where he discussed how the squad felt grabbing one point at home. The 33-year-old stated that his teammates executed their game plan and did not allow any space to PSG.

“I didn’t have much work to do; we played very well collectively. We did not concede any chances in the face of an incredible attack,” Mignolet said. “You can’t score them one-on-one. They have so many good qualities to eliminate. We tried to defend collectively so as not to leave them any space,” Mignolet said.