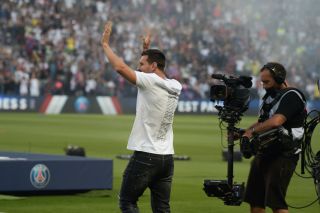 For Paris Saint-Germain supporters, it doesn’t get much better than last week, but you wouldn’t know that if you consume mainstream football media.

On the latest episode of PSG Talking, I’m joined by Mikko Kapanen of PSG Fan Club Helsinki to discuss the media’s coverage of Paris Saint-Germain, especially since the arrival of Lionel Messi. I also get Kapenen’s thoughts on PSG’s 4-2 victory over RC Strasbourg Alsace and the presentation of PSG’s five summer transfers.

Up first, we break down PSG’s latest match against Strasbourg at the Parc des Princes. Mauricio Pochettino’s squad went up 3-0 in under 30 minutes, but the visitors scored two quick goals to open the second half. Is this a case of PSG’s top players being unavailable, or, does the manager need to change formation to ensure the defense doesn’t leak goals?

One of the main talking points in the match against Strasbourg was when some PSG supporters whistled and jeered Kylian Mbappé when his name was announced as a starter. Obviously, his contract situation isn’t endearing him to the fans, especially the Ultras, but with a goal and an assist, he did silence his critics for the time being.

Before kickoff, PSG introduced Georginio Wijnaldum, Sergio Ramos, Gianluigi Donnarumma, Achraf Hakimi, and Lionel Messi to the fans. Kapanen and I share our thoughts on the reception they received and the live broadcast of the event.

In the second part of the podcast, we examine the media’s coverage of PSG. Why is it that every flaw of PSG is highlighted while the issues of other clubs are ignored? The traditional landscape of football is changing and in many ways, PSG is the catalyst for that, much to the chagrin of journalists who long for the days of how things used to be. Can PSG silence its critics in the media with a UEFA Champions League victory, or, will they always apply an asterisk to any accomplishment by a team led by Neymar Jr., Mbappé, and Messi?

It's a sportswashing project. Absolutely nothing "incredible" about it.