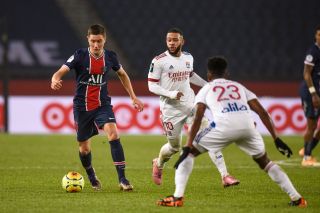 Ander Herrera didn’t start against Olympique Lyonnais, but the 31-year-old did make an appearance off the bench in Paris Saint-Germain’s 1-0 loss.

Herrera played 26 minutes after replacing Leandro Paredes, but the Spain international didn’t offer much to prevent the capital club from losing this fixture.

The midfielder had 20 touches, where he went 16 for 19 in his passes with an 84-percent completion rate. Nonetheless, the passes didn’t amount to much, whether it was key passes, crosses, or long passes.

After the match, Herrera spoke with Téléfoot la Chaîne (via Canal Supporters), where he didn’t make any excuses for their performance.

“There is no excuse. It’s the same situation for all the great teams. Now we have another match against Lorient and then in Lille. The championship is very open. We have to fight very hard to win it,” Herrera said.

With PSG continuing to drop points, the race for the Ligue 1 crown is one of the tightest in the Qatar Sports Investments era. As a result, the capital club finds itself in third place, with Lille OSC now overtaking first place and Lyon jumping over PSG for second place.

“We have a very strong group, with a lot of quality. Worried? No, we are quiet because we know our quality. But we have to think, of course, to find out what we haven’t done right. We are not going to win the championship like the last few years. We will have to fight until the end of the season.”