The Evolution of Paris Saint-Germain’s 4-4-2 Formation

Before the start of a match, the official announcement of the starting line-ups is generally accompanied by the formation in which a team will play. But these formations are only a simplification for the viewers, and at best it allows them to understand the theoretical positioning of the team without the ball.

What formations fail to describe, however, is the actual animation of the team when they have possession of the ball, which differs from one team to another depending on several factors (the quality of the players and their characteristics, the team’s principles of play, how the opponent plays, etc.)

For PSG, this is no different.

Since December, Thomas Tuchel’s men have almost exclusively defended in a 4-4-2, but during this time, the team has played in three main different animations in attack. 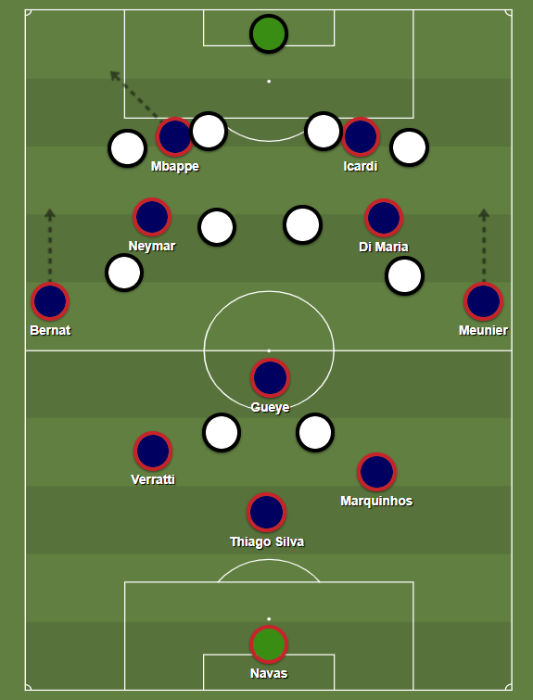 The game principles in this animation are clear:

Due to a clever mix of good spacing and the fact that there are six players ahead of the ball to attack the final third, this structure offers high attacking fluidity and increased attacking options, which can be a big advantage against organized defensive teams that lack the weapons to create dangerous counter-attacking opportunities.

The downside, of course, is the risk of punishment in transition. Against teams capable of performing in this area, the very offensive positioning of the fullbacks leaves only 4 players behind the ball in defensive transition. PSG have for example paid the price against AS Monaco during the first leg at the Parc des Princes, conceding 2 goals in the first half while playing in this system. 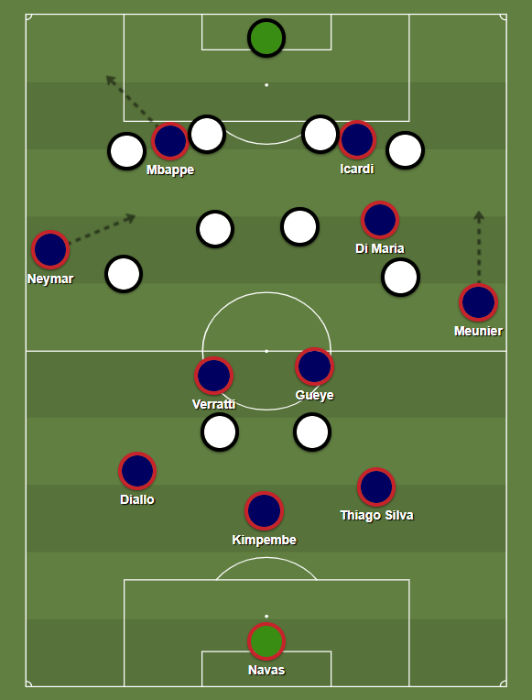 After the first half against Monaco, Thomas Tuchel decided to opt for a more balanced approach: the addition of a fifth player behind the ball in the build-up to control counterattacks better, while also replacing Juan Bernat – injured at the time – by Layvin Kurzawa. Abdou Diallo also played in this position until his injury against Lille.

The instruction given to Neymar is then to stay wider to provide width to the team during early phases of the build-up and compensate for the absence of an attacking left-back to stretch the defense, with the freedom to cut into the left half-space whenever it’s possible. Mbappé was also instructed to occasionally drop into this area, but he also drifted to the left from time to time, forming what then looks like a 3-2-4-1 formation. 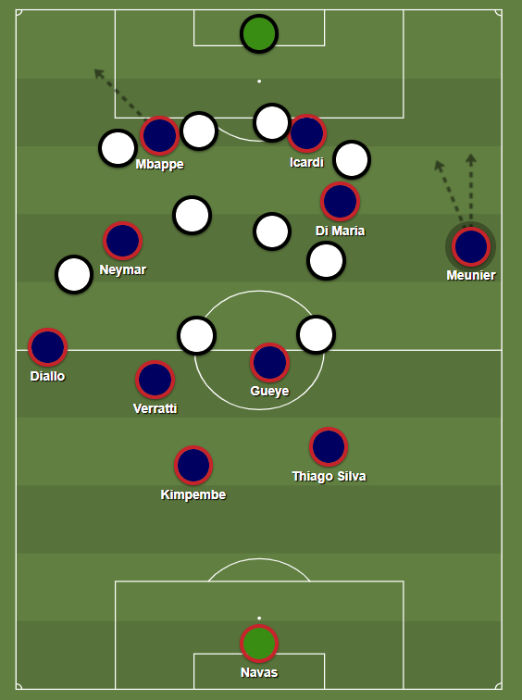 Playing in this animation, PSG started many of their attacks on the left side of the pitch, relying on the playmaking abilities of Verratti and Neymar, with the idea of overloading the left flank to attract defenders to one side before switching the ball to the right flank, with Thomas Meunier always positioned on the far right side to stretch the defense.

However, the few attempts to attack from the right flank were not necessarily rewarded because of the technical limitations of the Belgian wing-back, who has completed only 17 percent of his crosses in Ligue 1 and the UEFA Champions League this season. 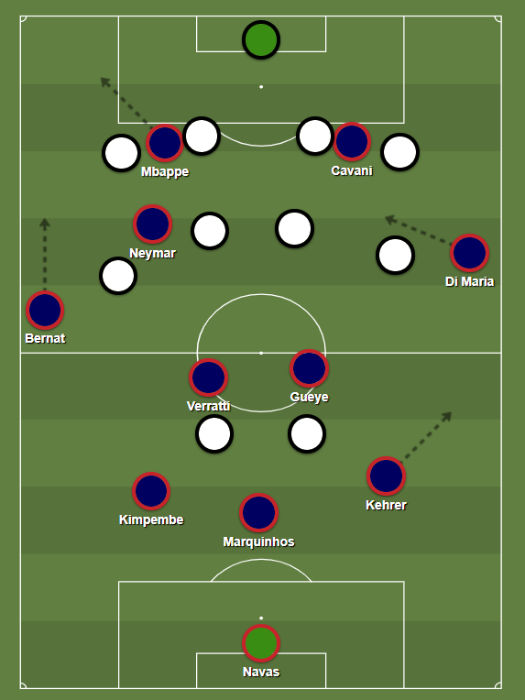 With Meunier missing the 2nd leg against Borussia Dortmund due to yellow-card accumulation and Bernat returning from injury, Thomas Tuchel then decided to reverse the roles: Thilo Kehrer on the right to replace Meunier and keep this fifth player behind the ball, Bernat as an overlapping left-back next to Neymar in the left half-space and Di Maria positioned wider with the freedom to cut into the right half-space occasionally.

This structure, similar in principle to the previous one, increases Neymar’s involvement in PSG’s attacks as he’s in a more central position, a role which Di Maria had occupied during the previous weeks.

Another thing worth mentioning here is the great technical ease that the left side of the team enjoys in this animation with Mbappé, Verratti, Bernat, and Presnel Kimpembe, who’s comfortable at playing from the back, never hesitating to play vertical passes to find Neymar between the lines.

To sum up, the German coach seems to have adopted before the break a tactical approach based on a 5+5 composition: five players behind the ball to play from the back and control counterattacks, and five players in front of the ball to attack and create goal-scoring opportunities. Will it be enough to go far in the Champions League?