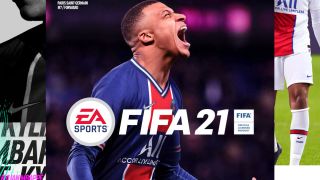 Sure, the Ballon d’Or is nice and all but having your image on the cover of the FIFA video game is arguably just as impactful and difficult to accomplish.

For the newest edition, FIFA 21, Paris Saint-Germain superstar Kylian Mbappé will grace the cover for the first time in his young career.

The Frenchman appears on the cover wearing PSG’s stunning new 2020-21 home and away kit and quite honestly, it’s one of the best covers of the game I’ve seen in years.

The news that Mbappé would be the face of FIFA isn’t all that surprising. It was reported that Neymar Jr. could have been the cover athlete but because of his uncertain future at PSG, he was skipped over for FIFA 20 and now FIFA 21.

Unlike Neymar, Mbappé pledged at halftime of PSG’s match against Celtic FC on Tuesday that he will remain at PSG at least for one more season in the French capital. The 21-year-old forward is under contract with the Ligue 1 champions until 2022 and the club is eager to extend his current deal.

FIFA 21 will be released on October 9, and I will definitely be picking it up on launch day. What about you?