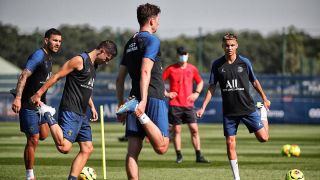 After several days of medical and physical tests earlier this week, the Paris Saint-Germain players returned to the pitch in small groups to train.

While many of the players may have kicked the ball around with friends or their kids, this was the first time they were able to train with their teammates at PSG’s facilities.

All of PSG’s superstars are shown in the video working out, including Neymar Jr., Kylian Mbappé, Mauro Icardi, Angel Di Maria, Thiago Silva, and Marco Verratti. The noticeable absences are the players who will not be extending their contracts and leaving at the end of the month, which includes Edinson Cavani, Thomas Meunier, Adil Aouchiche, and Tanguy Kouassi.

This week is the start of PSG’s build-up to the resumption of the 2019-20 season following the coronavirus crisis. Next month, the club will partake in a few friendly matches and then feature in two domestic cup finals on the last two Fridays of the month. In August, manager Thomas Tuchel will lead his squad into the quarter-finals of the UEFA Champions League.

PSG can close out the season with three trophies and much of their success depends on their ability to train well and get back into rhythm and avoiding injury.