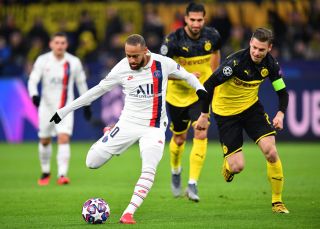 There’s a scene in the television show Bob’s Burgers, in which Bob Belcher utters a quote, “I’m literally grasping at straws!” and this is what the Spanish media and FC Barcelona sound like when discussing the possible return of Neymar Jr.

Reports surfaced in March over the Catalan club’s financial situation due to the coronavirus pandemic, so paying a transfer fee outright is out of the question.

Without the financial resources to pull off a blockbuster transfer for the 28-year-old superstar, the next resort is player swapping. One player that’s always in the discussion is Ousmane Dembélé, who at this point hasn’t stayed healthy to warrant his hefty transfer fee that Barca paid in 2017 which was €105 million-plus add-ons that could take the deal up to €147 million.

Dembélé isn’t at Neymar’s level and likely never will. However, in a piece for Betfair, Barcelona alumni Rivaldo explained that his former club could include the Frenchman and cash in a package deal to hopefully bring Neymar back to the Camp Nou.

“There are rumors suggesting that PSG might be interested in Ousmane Dembélé and, even if I think Dembélé is a great player, I think it could be a good opportunity for Barcelona to finally bring Neymar back,” Rivaldo writes.

Then the 48-year-old goes off the rails by saying this transfer would be a win-win for both clubs…newsflash, it wouldn’t.

“Of course, Barça will have to pay a little more money to make the deal, but I think it could be a win-win activity for both clubs,” Rivaldo said. “Dembélé could see a good move because he will have the chance to rediscover his best form and become one of the star players of PSG. He would be back in his native country and could produce solid performances, so I think this decision would be interesting for him. But first, we have to wait to see if the clubs will reach an agreement.”

After seeing Neymar put the squad on his back offensively to get them past Borussia Dortmund in the Round of 16 and into the quarter-finals of the UEFA Champions League, there’s no question that none of that is happening with Dembélé playing the role of the Brazil international.

With PSG putting together a contract extension offer, these rumors could finally go away once and for all.