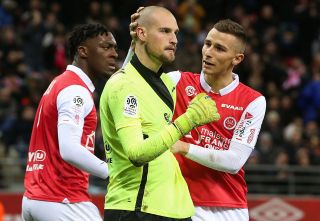 There’s no question that Leonardo will be looking for a goalkeeper during the upcoming transfer window.

Keylor Navas in the unquestioned starter, but his backup, Sergio Rico, will return to Sevilla FC after his loan while Marcin Bulka and Garissone Innocent will likely go out on loan themselves. As for Alphonse Areola, he will return from his loan at Real Madrid but it’s unlikely he’ll stick around as he’s in pursuit of starter minutes.

One solution to the problem could be Stade de Reims goalkeeper Predrag Rajkovic. The 24-year-old Serbian had a breakout season for Reims as he recorded 14 clean sheets and only 21 goals conceded in 30 appearances. His performance helped lead Reims in qualifying for next season’s UEFA Europa League.

Rajkovic probably doesn’t want a backup role after such a successful season and he is under contract until 2023, but, PSG may be able to convince him that he’s the goalkeeper of the future (Navas will be 34 during next season) and promise him minutes in domestic cup competitions.

Plus, Reims could like use the transfer fee as they’re feeling the financial impact of the coronavirus like so many other clubs. Transfermarkt puts his value at €5.5 million but I expect Reims to ask for significantly more especially if PSG is involved. Regardless, I think the amount will still be in PSG’s ballpark.