Kylian Mbappé received praise for supporting the fight for equality following the murder of George Floyd by a now-former Minnesota police officer and rightfully so. However, he wasn’t the first PSG player to speak up.

Last Tuesday, a day after Floyd was killed while in police custody, Layvin Kurzawa re-tweeted filmmaker Ava DuVernay who wrote:

“You deserved your breath, your dignity, your life. Not to die in the street, murdered by a white cop’s knee on your neck. You deserved our tears, our prayers, our rage, our action. We must act – for you – and for all of those where no cameras are present. We must. #GeorgeFloyd.” 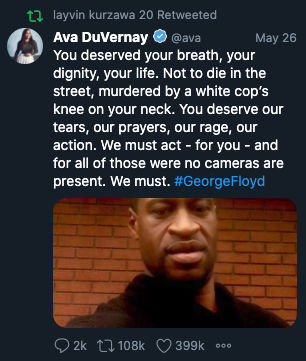 Kurzawa has remained vocal on social media and some of his teammates have joined him in calling for racial equality, including Mbappé and Pablo Sarabia.

Say NO to racism 🤜🏿🤛🏻 #blackouttuesday pic.twitter.com/WDkpwkB3L8

On Tuesday, Kurzawa took his voice to the streets of Paris where he joined 20,000 others in protesting the murder of Adama Traore, a 24-year-old who was killed in the suburbs of Paris while in police custody in 2016 as well as the murder of Floyd.

Kurzawa posted photos on social media showing him wearing a shirt that reads, “Fear of a Black Planet” and holding a sign that reads, “Stop Racism.” His tweet was straight to the point as well.

I can sometimes be a bit harsh on Kurzawa for his play on the pitch but you have to commend him for using his platform to raise awareness and speak out against police brutality.

Kurzawa’s contract with PSG expires on June 30, and it’s unlikely that he will remain in the French capital with several teams interested in signing the French international.

If this is the last month that Kurzawa is a PSG player, I’m glad this is his parting image.