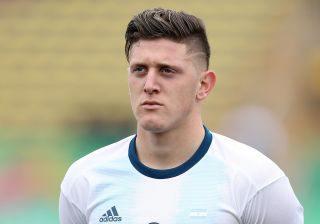 Over the summer transfer window, Leonardo, Paris Saint-Germain sporting director, will have to figure out the depth issue at the striker position for the 2020-21 season.

As of now, Les Parisiens are still pondering whether or not to trigger the option to buy clause on Mauro Icardi. Then there’s Edinson Cavani and Eric Maxim Choupo-Moting whose are both on contracts that expire on June 30.

Even if the capital club decides to pay the reported €70 million for Icardi, they’ll need some depth behind him, especially if they choose to move on from Cavani and Choupo-Moting.

One option is to bring in a young striker with high upside and who plays a different style from the 27-year-old, which is why PSG is now showing interest in another Argentine striker, Adolfo Gaich.

According to Foot Mercato, PSG and AS Monaco are the two French clubs look to sign the 21-year-old San Lorenzo de Almagro striker.

In 27 total appearances, Gaich has a total of 7 goals. Furthermore, the young number nine has also made several international debuts at the youth levels for Argentina. A move to PSG could allow him to slowly transition to the European game.

Gaich recently gave a radio interview in Argentina where he described his playing style:

“My strong point is not aerial play, despite my size. I don’t consider myself a slow player. I like to turn around and get in touch with the ball,” Gaich said.

Gaich has a reported $15 million release clause, so it will be interesting to see how much Ligue 1 champions will be willing to pay for a backup center-forward with a high upside.