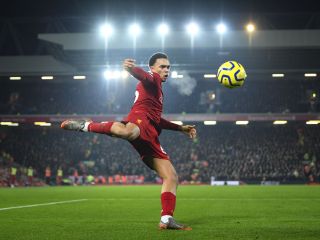 Since last summer when Kylian Mbappé said he likes to use Liverpool FC when he plays the FIFA video game, there have been multiple reports that the Paris Saint-Germain superstar could make the jump to the Premier League and join Jürgen Klopp’s UEFA Champions League-winning squad.

There’s been a lot of debate as to whether a transfer like this could even be pulled off considering Mbappé’s value. So, I reached out to Liverpool fansite, Empire of the Kop, to get their thoughts on who they would be willing to part ways with if a swap-deal was proposed.

Here is the initial premise and who I would demand from Liverpool if I were running PSG:

Let’s get one thing straight before we get started. I don’t want Paris Saint-Germain to sell Kylian Mbappé for any amount of money or any package of players. He’s that special of a talent.

However, football is a business, and players do request transfers. If it came to be that Mbappé asked for a transfer and the club was inclined to listen to offers, I think Liverpool FC would be one of those teams picking up the phone.

Given Mbappé’s astronomical valuation, it makes sense for a swap deal to be worked out and Liverpool are uniquely positioned to put together a deal with the amount of talent they have in their squad.

If I were running PSG, here is who I would request from Liverpool for Mbappé:

I wouldn’t listen to any offer from Liverpool unless Trent Alexander-Arnold’s name was at the top of the offer sheet. If PSG must lose a local boy, then Liverpool should have to do the same. TAA also plays right-back, which has become a vital position in the modern game and world-class talents like him are difficult to find in the transfer market.

The next player I would request (yes, I want two players for Mbappé) is Sadio Mané. Losing Mbappé will leave a gaping hole in PSG’s attack and the club will need someone to replace his offensive output. Mané doesn’t have the pace of Mbappé but he can still give defenders nightmares with his ruthless dribbling ability. Assuming PSG retain Mauro Icardi after his loan from Inter Milan, the Ligue 1 champions could trot out Neymar Jr., Icardi, and Mané as their front three next season. I can live with that.

Alexander-Arnold and Mané are two big players for Liverpool, so, to make the numbers work and make Jürgen Klopp happy, I’d be willing to toss in one Julian Draxler to appease the German manager.

And here is the response to that proposal from Jordan of Empire of the Kop:

Firstly, I don’t think there’s any point speculating about Mbappé leaving in 2020. It’s not going to happen, but next summer, providing football returns to something close to normality, it might be more likely, so long as the Frenchman doesn’t pen a lengthy extension.

Next summer, Mbappé will have one year left on his contract, so if he fancies a switch, surely he won’t renew terms (or at least renew with a get-out clause) so he can control his own future.

Surely PSG would prefer to sell for a (still massive) sum than lose him for nothing a year later?

So working on this theory, I think any prospective swap-deal is probably off the table – but as this is fairly speculatory anyway – here’s my thoughts:

Trent is going nowhere! The Scouser wants to stay with his boyhood club for life and the lure of Ligue 1 is not going to pull him away – no offense intended! If Trent isn’t still at Liverpool in 2025, something has gone badly wrong, as he’s a jaw-droppingly special footballer who (like Mbappé) can go on to become a true great.

We don’t want to sell Sadio Mané either, but if you offered me a straight swap between our brilliant no.10 and Mbappé now – I’d probably take it because one is 28 and the other is 21. In terms of ability, I don’t think there’s that much in it, although Mbappé has scope to further improve while Mane is enjoying his peak.

But if in this fantasy land I’m giving up Mané, you’re not having anyone else on top, even with the bonus of Julian Draxler, who we absolutely do not need – especially considering he rejected us before we were the world’s best team.

And here is my response to Jordan’s response:

I agree on all fronts regarding Mbappé’s contract situation. If he doesn’t sign an extension this summer, PSG will not be in the driver’s seat when it comes to a transfer and will either have to take the best offer available or keep him until 2022 and then let him leave for free.

In regards to the proposed fantasy swap of Mbappé and Draxler for Alexander-Arnold and Mané, I understand the reluctance in blowing up the current Liverpool team that has won a Champions League and all but won the Premier League, but that’s what it would take in my opinion to bring a generational talent like Mbappé to Anfield.

Mbappé is the best player aged 21 or younger, according to ESPN, while Alexander-Arnold is third on the list. I don’t think it’s unreasonable to request the Liverpool native in exchange for the Frenchman.

Considering Liverpool’s new deal with Nike, which will give them 20 percent royalties on net sales, I feel I would have to ask for Mané to be included in the deal to ease the loss of Mbappé on and off the pitch.

Of course, a mega-swap like this is virtually impossible but it’s fun to play out the scenarios while we wait for football to start back up again. Liverpool hopes to be able to wrap up the Premier League title while PSG must wait until August to resume the Champions League.