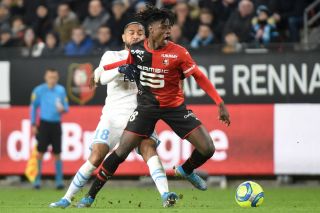 In 2017, Kylian Mbappé had an opportunity to leave AS Monaco and sign for Real Madrid but he ultimately chose Paris Saint-Germain.

Last November, former Monaco vice-president, Vadim Vasilyev, stated that Mbappé told him that it was too early to leave France and that he wanted to become a great player in his home country.

Vasilyev even went as far as to say Mbappé made the right decision because Real Madrid will always be there ready to sign him.

Mbappé is a very smart kid but I’m sure PSG helped him in reaching that conclusion. Remember, this is a kid who grew up with photos of Cristiano Ronaldo in a Real Madrid kit on his wall.

Fast forward to 2020 and there’s another French prodigy that is lighting up Ligue 1 and has caught the eye of Real Madrid.

Since his breakout match against PSG earlier this season with Stade Rennais, Eduardo Camavinga has been on every top club’s wish list.

PSG was recently linked with Camavinga but Real Madrid appears to be the favorite to land the 17-year-old midfielder.

If Leonardo, PSG’s sporting director, is seriously considering making a bid for Camavinga, they should deploy the same tacts they used when they lured Mbappé from the French Riviera to the French capital.

At six-foot-tall, Camavinga is the tall midfielder that Leonardo has been looking for and he could try and convince him that at 17, there’s plenty of time to sign for Real Madrid and wouldn’t it be more meaningful to win in France before moving abroad?

In terms of playing time, we saw two 17-year-olds, Tanguy Kouassi and Adil Aouchiche, break into the first team this season. Given Camavinga’s talent, I have no doubt he would see significant playing time under Thomas Tuchel if he chose Paris over Real Madrid.

The teenager won’t come cheap, though. According to Transfermarkt, Camavinga should command around €40 million. With NBA-style transfers potentially being preferred due to the financial impact of the coronavirus this summer, sending a player to Rennes in exchange for Camavinga could be on the table as well.