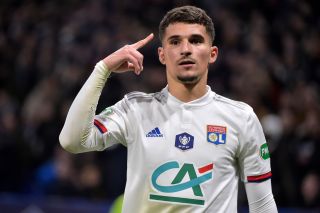 According to Il Corriere dello Sport (via Football Italia), PSG are among the teams linked to the 21-year-old along with Juventus FC and Manchester City.

Juventus have long been the favorites to sign Aouar after Lyon’s president, Jean-Michel Aulas, recently said that he would like to see the player at the Turin-based club in the future.

However, the deep pockets of PSG and Manchester City could force Aulas to sing a different tune. The report out of Italy revealed that Lyon won’t accept a bid below €70 million for their prized asset.

This season, Aouar has made 37 appearances for a Lyon side currently in seventh place in Ligue 1. He’s scored nine goals and recorded seven assists, but his impact on the pitch ability to create goal-scoring opportunities for his teammates cannot be overlooked (Lyon has scored the third-most goals in Ligue 1 this season).

At €70 million though, I doubt PSG will stay in this race for long. There are other more affordable options and with Marco Verratti, Idrissa Gueye, and Marquinhos already in the midfield, PSG needs to add depth and not an up-and-coming player who needs minutes to continue his development.