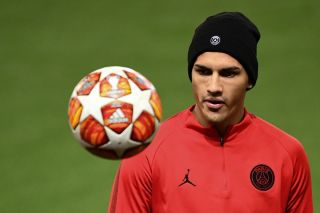 News
Paredes Belives Cavani Will Play For Boca Juniors and Hails Verratti as a Top Midfielder
By Eduardo - 13 February 2020, 16:49

During a recent interview with El Show de Boca (via Culture PSG), Paris Saint-Germain midfielder Leandro Paredes mentioned the admiration some of the Spanish speaking players have for his former club Boca Juniors. The Argentina international also admitted the love he has for his teammate Marco Verratti.

One of the PSG players that have asked Paredes about Boca Juniors and the environment at the Bombonera is Edinson Cavani. Paredes believes that El Matador would like to continue playing in Europe, but wouldn’t rule out the possibility of Cavani playing for Boca down the road.

“I think he wants to stay for another or two years in Europe. Afterward, he would certainly love to play Boca. He’s perfect for this club,” Paredes said.

The 25-year-old went on to say that Cavani isn’t the lone PSG player intrigued by Boca. His fellow Spanish-speaking teammate Ander Herrera is also a fan of the Argentinian club. Perhaps in the future, we could see two former PSG players playing inside the Bombonera. Paredes also mentioned that he sees himself returning to his boyhood club one day.

After talking Boca, Paredes concludes the interview by offering kind words to his teammate Marco Verratti. Paredes said that there are plenty of talented midfielders but to him, it’s Verratti who stands out to him.

“It’s easy to talk about Leo [Messi], Ney [Neymar Jr.] or Kylian [Mbappé], and all these players that shine and everyone’s talking about, but Verratti is a player I really like. At my post, there are many very good players: [Toni] Kroos, [Sergio] Busquets, [Frenkie] De Jong. But Verratti is really a player that I love.”

From this interview, it shows how well the Argentine has integrated himself into the club, and perhaps it’s starting to reflect itself on the field. With the stretch PSG will be on in the coming months, Paredes will be a vital part in the midfield with manager Thomas Tuchel rotating players to keep the squad fresh.