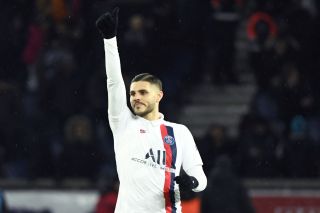 Mauro Icardi has cooled off some after his blistering start to his Paris Saint-Germain career but his quality is undeniable and one big Premier League club, in particular, is keeping a close eye on him throughout the rest of the season.

Icardi arrived in the French capital last summer on loan from Inter Milan and while PSG does have an option to buy at the end of the loan, the player will ultimately decide his future.

At Manchester City, they have a prolific Argentinian striker in their ranks as well. Sergio Agüero is the highest-scoring foreign player in Premier League history and because of his loyal service, City are prepared to allow him to determine when he leaves (contract expires in June 2021).

With that in mind, Pep Guardiola and City executives are already targeting potential replacements and according to 90Min, the reigning Premier League champions would prefer to bring in Borussia Dortmund striker Erling Haaland who despite recently signing for the German club, has a buyout clause of a reported €60 million.

Haaland is a hot commodity right now and there’s no guarantee City will be able to sign him. With that in mind, the club is also considering Icardi according to 90Min.

It’s unlikely PSG wouldn’t trigger Icardi’s buyout clause (€65 million) with Edinson Cavani expected to depart the club this summer but you never know. The allure of the Premier League might be enough to convince him to make the switch.

So far this season, Icardi has scored 18 goals through 27 total appearances for Paris Saint-Germain.