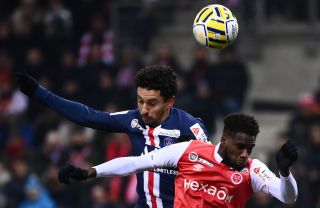 After scoring from a corner kick in the 9th minute, Paris Saint-Germain doubled their lead over Stade de Reims in the 31st minute as Les Parisiens look to reach the Coupe de la Ligue final.

The last touch comes off @StadeDeReims defender Konan, and it means a 2-0 lead for @PSG_English in #CoupedelaLigue#SDRPSG
📺 – beIN SPORTS
💻📱 – https://t.co/LRYa03w6yI pic.twitter.com/kRU7p5kOsO

Neymar’s free-kick was practically from corner-kick range and on first look, it appears as though he either scored directly or it was touched by Thiago Silva. Officially, the goal was credited to Reims’ Ghislain Konan as an own-goal.

It’s a shame Neymar won’t get credit for PSG’s second goal on the night but I’m sure he’ll be fine with playing a major role in PSG’s first two goals of the night.