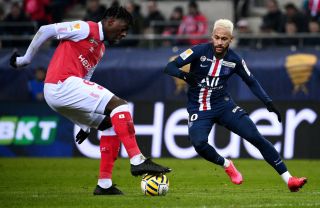 It’s not quite as strong of a lineup as I predicted but manager Thomas Tuchel is clearly going for the win against Stade de Reims to reach the Coupe de la Ligue final.

Leading the attack will be Kylian Mbappé, Neymar Jr., and Pablo Sarabia. We know all about the two most valuable players in the world but the Spaniard has been in fantastic form and I’m eager to see how he performs on the win opposite Neymar.

The formation Tuchel should deploy is a 4-3-3, so the midfield is a trio of Julian Draxler, Marco Verratti, and Leandro Paredes. It’s a rare start for Draxler who will be hoping to perform better than he did against FC Lorient last weekend. Paredes has been improving his play steadily and will have plenty of options to play his patented long-ball pass to the speedy Mbappé.

On defense is where Tuchel had to get the most creative. At left-back, Abdou Diallo starts over Layvin Kurzawa. Presnel Kimpembe and Marquinhos are the center-back pairings, and Thomas Meunier returns to the lineup at right-back. Keylor Navas is in goal.

Reims has defeated PSG the last two times the teams have met, including once at the Parc des Princes, which likely explains Tuchel’s strong lineup. There’s also a place in a cup final on the line.