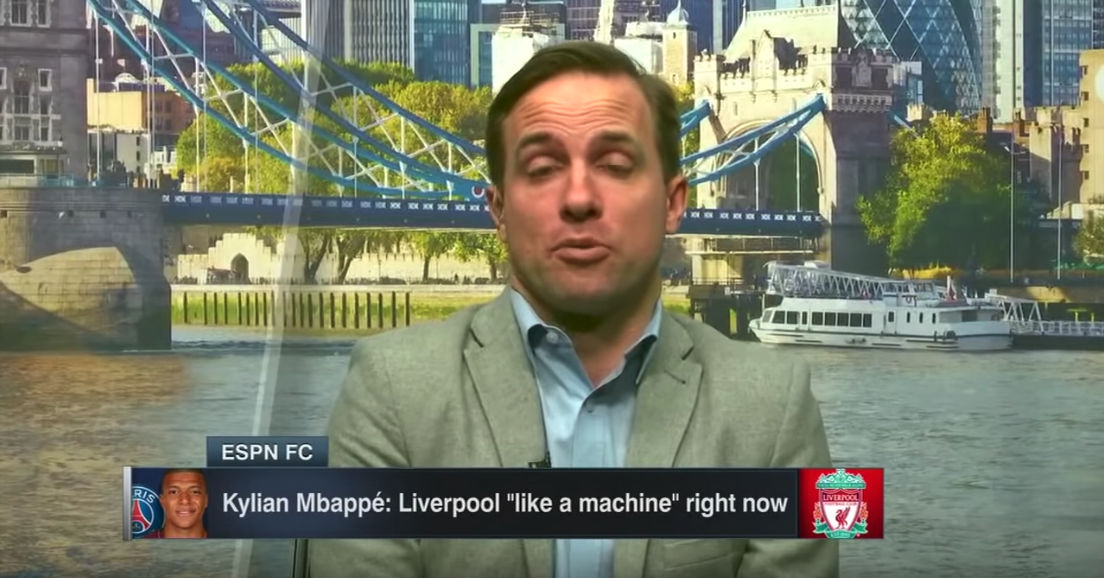 Kylian Mbappé made news recently by praising Liverpool FC. He called them “amazing” and said their ability to grind out wins is machine-like.

The Frenchman’s praise of Jürgen Klopp’s squad ignited rumors that he could sign for the Premier League leaders this summer. It’s not the first time Mbappé-to-Liverpool speculation has made the rounds. Any time Mbappé mutters the word “Liverpool” their fans take to social media to get #Mbappe2020 trending and the media can’t help themselves to report on the possibility.

Keep in mind that Klopp has already said that his team cannot afford Mbappé:

“OK, from a sporting point of view, there are not a lot of reasons to not sign him,” Klopp said. “What a player he is, but it is about the money of course. No chance. Absolutely no chance. Sorry for killing that story.”

On a recent episode of ESPN FC, journalist Julien Laurens was asked about the possibility of Mbappé joining Liverpool after his praise of the Merseyside club and he had this to say:

“It’s pretty simple. If Liverpool can pay the €300 million, which is what PSG will ask anyone, plus give him the wages that he’ll want, he’ll consider that offer every single day of the week…”

Oh, is that all? Just €300 million-plus wages? Laurens should have just suggested to Liverpool that they find a unicorn that poops money and it would have been just as practical.

There is only one, maybe two clubs that can afford Mbappé’s transfer fee and wages and they both reside in Spain (FC Barcelona and Real Madrid). There’s also the possibility that PSG will keep Mbappé for the duration of his contract (2022) and then let him leave on a free to wherever he wants.

In order to fund Mbappé’s transfer, Liverpool would have to gut their entire team, sell advertising rights to Anfield, and yes, find some kind of farm animal that defecates gold bars. The Nike deal helps but it’s not nearly enough to afford Mbappé and stay within Financial Fair Play regulations.

The notion is so ridiculous that if it were me being asked the question, I would have laughed it off and said next question. Maybe that’s not the best for ratings but it’s better than suggesting the practically impossible.

Thankfully, ESPN’s Craig Burley added a dose of reality to the conversation by saying that you can admire a team without trying to force a transfer.