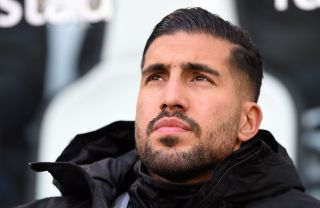 PSG Mercato
Emre Can Likely Headed to Premier League as PSG Focus on Juventus Defender Instead
By Ed - 28 January 2020, 8:09

If you’re following the latest transfer rumors, you’ve likely seen reports that indicate Juventus FC midfielder Emre Can could depart the Turin club before the close of the January window.

Unfortunately, the rumors of the German coming to Paris Saint-Germain have completely disappeared and Can is now rumored to be heading to a number of different clubs including Arsenal FC, Tottenham Hotspur, and Manchester United, according to Metro. There’s also the possibility he could end up at Borussia Dortmund, PSG’s UEFA Champions League opponent in the Round of 16.

The reason for the Can collapse is likely due to the emergence of Leandro Paredes recently as a viable midfield option. The Argentine was rumored to be included in a deal for the 26-year-old but given the lofty fee PSG paid for Paredes, €40 million, the numbers just didn’t add up and Leonardo, PSG’s sporting director, is not one to come up short in a deal.

Can does fit the bill of a physically imposing midfielder that Leonardo is looking for but given his lack of playing time this season in Serie A (eight total appearances this season), there’s no guarantee that he would be a hit in the French capital.

Instead, PSG preferred to work on a swap deal that would send Layvin Kurzawa to Juventus for Mattia De Sciglio.

L’Equipe reported on Monday that the Frenchman had agreed to a four-year contract with Juventus but according to Le Parisien, the two sides remain far apart on a deal because the Italian club rates De Sciglio higher than Kurzawa. In order to complete the transfer, PSG may need to send Kurzawa and cash to Juventus to land the Italy international.

With only a few days remaining, PSG needs to wrap up the Edinson Cavani transfer to Atlético Madrid, the Kurzawa/De Sciglio swap, and there may just be one additional surprise like there was last summer when Mauro Icardi signed on loan. Could it be Lucas Paquetá or maybe even Arsenal’s Pierre-Emerick Aubameyang? Stay tuned…