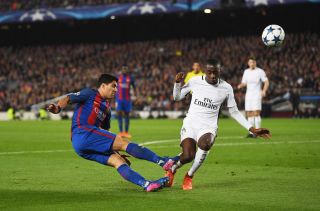 This is going to be a short article because I really don’t like to talk about that night at the Camp Nou where I felt physically ill but I thought this bit of news about former Paris Saint-Germain midfielder Blaise Matuidi was worth sharing.

We all know what happened on March 8, 2017. PSG carried a 4-0 lead into the second leg of their tie against FC Barcelona in the UEFA Champions League. They proceeded to throw that lead away and lost 6-1 to crash out of the tournament in embarrassing fashion.

The loss was apparently so bad that according to a report from Sport, Matuidi contemplated retiring.

“That moment was very difficult,” the Frenchman said. “In the locker room, I told myself that it was not possible and that I did not want to continue playing football. I was ashamed of what happened. I was ashamed of myself.”

Matuidi has always been one of my favorite PSG players and knowing how devastated he was after the final whistle makes me wish he was still at the club.

Instead, Matuidi left the French capital five months after the loss to Barcelona and joined Juventus FC as reported by the BBC.