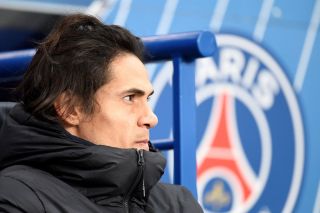 On Friday evening, I was on the receiving end of some harsh criticism following a tweet I sent about Edinson Cavani.

I reported on the story about former Manchester United player Louis Saha encouraging the Red Devils to sign Cavani in the January transfer window and my tweet with the story said, “We’ll drive him to the airport.”

🆕 We'll drive him to the airport.

I didn’t really think much about it but apparently, my flippant words triggered several fellow Paris Saint-Germain supporters who called me out.

Ok, that's flat out offensive. Cavani deserves every little bit of patience there is, and even more. It's not like we need him to be on top form right now. He is a club legend, and that should mean something to you.

Can he at least finish out his contract? He’s a great back up right now who’s causing no issues while being benched. Shipping a guy off half a season before his contract expires doesn’t exactly show the players you trying to extend you’re loyal to team first players.

Very disrespectful to a club legend. One of the reasons I love this club so much is cause of him, sure he may not be performing at the highest level but no way does deserves to be kicked to the curb after everything he's done for us.

This account used to be more about facts than opinions, this is no way to talk about the club's historical top goalscorer.

lol what a way to talk about a club legend

I could keep going but you get the point. Instead of reading the article, these followers focused on the six words in my tweet and decided that I am anti-Cavani. So allow me to explain my stance on El Matador.

Cavani is a club legend. If PSG decided they wanted to build a statue of him outside the Parc des Princes, I wouldn’t have a problem with it. If they wanted to spray paint his face outside the stadium along with the other club legends, I would applaud that as well. I’m all for warm and fuzzy ceremonies that honor Cavani’s accomplishments but right now, on December 7, 2019, I’m focused on more important things like how PSG can win the UEFA Champions League.

Here are the facts: Cavani is 32-years-old and will turn 33 in February. He has scored two goals in 10 appearances (one in each of the first two Ligue 1 games of the season) and he’s been sidelined for much of the season with a hip injury. In training on Friday, he felt some discomfort in his calf and he was left out of the squad heading to Montpellier HSC on Saturday.

Want some more facts? Against FC Nantes last Wednesday, he had one of the most horrific misses I’ve ever seen. His 2019-20 campaign has been full of these brief cameos where he comes into the game and makes a fool of himself because he’s trying too hard.

Cavani is very much behind Mauro Icardi and Kylian Mbappé in the PSG striker rankings and if it were up to me, I would probably put him behind Eric Maxim Choupo-Moting if I’m being honest. The point I’m trying to make here is that unless something drastic happens, Edinson Cavani will not be contributing in a meaningful way towards the club’s goal of winning the Champions League.

With that in mind, you have to ask yourself. Is it better to keep Cavani until his contract runs out at the end of the season or, do you try and get something for him in January if there’s a buyer?

Given his form, I wouldn’t think a club would make an offer for Cavani in January instead of waiting until the summer when you can get him on a free transfer, but if Manchester United is that desperate and they want to see if the Uruguayan can save their season, why shouldn’t PSG sell? The funds could be used to secure a quality right-back or make a big splash for Napoli’s Allan. That is why I said that I would drive him to the airport. I’m all for a nostalgia tour towards the end of the season but if someone wants to give PSG €40 million for Cavani (Transfermarkt value), they should take that deal in a heartbeat.

I should also say that my feelings towards Cavani have been somewhat tainted lately. While he hasn’t rocked the boat since his benching in favor of Icardi, his father made a comment about PSG never winning the Champions League because it takes more than money. That didn’t sit well with me at all. If Neymar Jr.’s father made those comments, I guarantee you the Ultras would jeer him even worse than they already do now.

When it comes to Cavani, you have to decide if it’s more important to placate him with meaningless minutes at the end of matches for PSG, or, sell him in January where he could actually get playing time at a club that needs him. He may be the club’s all-time leading scorer, but all good things come to an end. Peyton Manning didn’t end his career with the Indianapolis Colts. Michael Jordan ended his career with the Washington Wizards, not the Chicago Bulls. Wayne Gretzky didn’t retire with the Edmonton Oilers or Los Angeles Kings.

All of this might be a moot point though. According to ESPN FC, PSG is aware of the interest from clubs like Atlético Madrid but they don’t want to sell because it leaves them light at the striker position in case of injury. I think that is the right decision but again, if a desperate team comes in with stupid Premier League money, you make the deal and figure out the rest later.