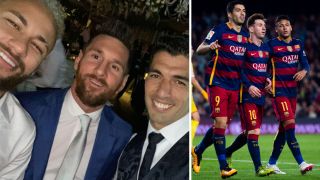 It was a reunion that literally no Paris Saint-Germain supporter asked for.

To remember the occasion, Neymar took a selfie with his two former FC Barcelona teammates who he left in 2017 when he signed for PSG.

Also in attendance, according to the Mirror, was Barcelona’s Sergio Busquets and Jordi Alba. While I don’t love that many Barca bros hanging around Neymar, I don’t think there’s too much to worry about here.

Neymar traveled back to Brazil for the long holiday break and it’s just a short private plane ride to the upscale resort in Uruguay where the event was hosted.

We also know that Neymar is in constant contact with his Messi and Suárez via WhatsApp so it’s not like this is the first time ‘MSN’ has had a chance to speak in months.

Sure, Neymar did try to force a transfer back to Barcelona to play alongside Messi and Suárez last summer but a lot has changed since then.

Neymar appears to be happy in Paris and his partnership with Kylian Mbappé is arguably just as good as the one the Brazilian had with Messi and Suárez.

Depending on how the UEFA Champions League goes for PSG this season, I could envision a situation where Neymar decides to sign an extension with PSG to remain in the French capital. Plus, it’s unclear if Barcelona could even afford him if he was available next summer.

Paris Saint-Germain resumes training on January 2 and will face ESA Linas-Montlhéry in the Round of 64 of the Coupe de France on January 5. I think it’s unlikely that Neymar will feature against an amateur side but you never know what lineup manager Thomas Tuchel will go with.