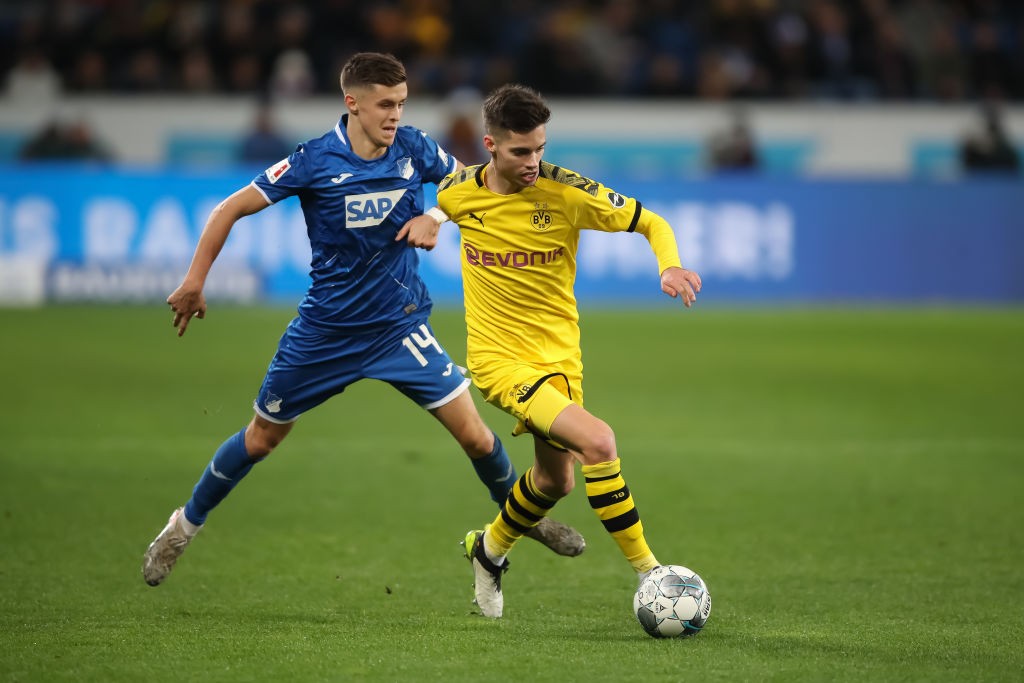 Match Recap
Eye on the Enemy: Dortmund Blow Lead to Leipzig and Lose to Hoffenheim
By Eduardo - 22 December 2019, 8:30

Last Monday, Paris Saint-Germain drew Borussia Dortmund in the Round of 16 of the UEFA Champions League. From now until the second leg on March 11, I’ll be curating their results, reactions from the players, coaches, and supporters on Twitter weekly.

Also, not everyone can keep an eye on how Dortmund is doing, so it’s a good idea to put together all the highlights and reactions for PSG supporters to see and better understand the club’s challenge in the Champions League.

Since the draw, Die Schwarzgelben had two fixtures against Bundesliga leaders RB Leipzig and TSG 1899 Hoffenheim, resulting in a draw and loss.

Let’s begin with their match against Leipzig, Dortmund jumped out to an early 2-0 lead with goals from Julian Weigl and Julian Brandt.

Julian Weigl finds space at the near post from long range to fire Dortmund into the lead in a Bundesliga showdown vs. league-leading RB Leipzig

Are you serious with this turn, Julian Brandt?! 😱

Dortmund are in dreamland vs Leipzig! pic.twitter.com/SZTlZFPoOx

It looked as though Dortmund would secure the win and three points; however, that wasn’t the case, and if Neymar Jr. and Kylian Mbappé saw the highlights of their defense, then they should be salivating as they gifted Timo Werner two easy goals.

A howler from the Dortmund keeper gifts Timo Werner and @RBLeipzig_EN a goal back. pic.twitter.com/HVOIVYc7OD

Dortmund would reclaim the lead courtesy of a Jadon Sancho goal, but once again, their defense let them down. Czech international Patrik Schick would score the equalizer as Dortmund dropped points at home.

A 2-1 Loss to Hoffenheim

After squandering two leads, Dortmund went on the road to take on Hoffenheim. Once again, the squad would get off to a good start as Mario Götze opened up the scoring.

It looked as though Dortmund would pick up three points on the road; then, they gave up two goals in under 10 minutes, leading to a 2-1 win by Hoffenheim.

Hoffenheim are level! It's the second-half substitute Sargis Adamyan who sweeps home from close range. pic.twitter.com/apD6KGstVO

It hasn't been Dortmund's week. 😬 pic.twitter.com/BOg13g98j3

Finally, the reactions from the fan base set a tone of the confidence level Dortmund supporters have as the two dates against PSG near. Let’s start with some tweets after their 3-3 draw to Leipzig.

We gotta tighten up at the back, PSG are gonna destroy us if we don’t

Finally, here are some reactions after Dortmund fell 2-1 to Hoffenheim.

Horrific second half, how is Favre still there? No idea whatsoever.

After a decent first half, Favre stupidly made two unnecessary substitutions which changed the shape of the team from 3-4-3 to 4-3-3 , it affected the course of the team during the second half so Favre is to blame

“We couldn’t manage to score the second goal. We lacked determination, conviction and concentration. It was an ugly result.” pic.twitter.com/bxKMB4yAYS