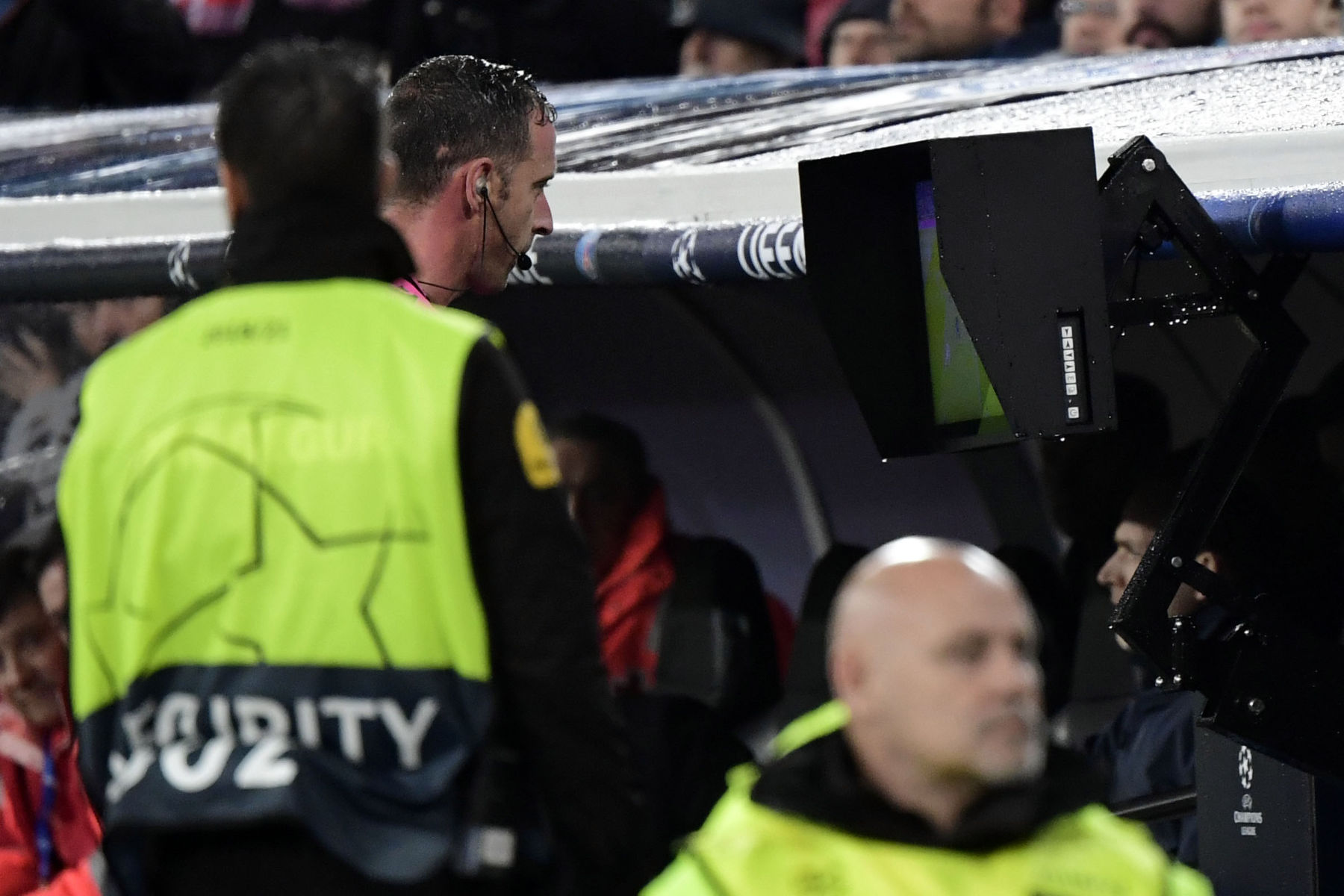 Paris Saint-Germain was outplayed by Real Madrid on Tuesday night at the Santiago Bernabéu Stadium but managed to battle back in the final minutes of the match to get a 2-2 result. However, a penalty kick decision in the first half could have awarded all three points to the visitors.

In the 42nd minute, Mauro Icardi won a penalty kick decision after he was brought down in the box by Thibaut Courtois. It was a no-brainer of a decision. Icardi was clearly fouled in the box and Courtois was initially given a red card for denying a clear goal-scoring opportunity. Then VAR happened.

Real Madrid players swarmed the Portuguese referee Artur Soares Dias and you can see Marcelo and others protesting a foul that occurred prior to Icardi being brought down in the box.

Dias then signaled for a VAR review and what was shown to the official through the VAR monitor was the interaction between Idrissa Gueye and Marcelo at the halfway line. After only seconds of viewing the replay, Dias called off the penalty, Courtois was allowed to stay on the pitch, and Madrid was awarded a free-kick at the spot of the foul.

Just seen the Gueye "foul" on Marcelo that saw the Courtois foul (& red) on Icardi overruled via VAR. Laughable. #UCL

By the letter of the law, VAR did its job. According to UEFA.com, VAR can take into account any infringement that could have taken place in the immediate build-up to the incident. That’s why it was used to look at the Gueye’s “push” on Marcelo.

You can’t tell from the GIF above but Dias is standing maybe 10 feet away from Gueye and Marcelo. He’s positioned perfectly to see what happened in real-time. After Marcelo goes down theatrically, Dias actually motions for him to get up and play on.

The ref literally motioned for Marcelo to get up and play on…PSG's penalty was waived off for this? https://t.co/Hjj0bn4IlB

How is a VAR replay better than actually viewing the incident in person from a better angle than what any camera could capture? The “foul” itself was borderline if that. Marcelo is known to embellish challenges and Dias likely took that into account in his initial decision to play on. Let’s not forget that football is a contact sport. You’re allowed to put your hands on people. Think about it this way, would Neymar Jr. get that call?

I also don’t love the Real Madrid players circling the ref to influence his decision. You can’t tell me that having Sergio Ramos stare into your soul while yelling isn’t going to impact your decision.

We also need to talk about the Courtois red card. What this VAR decision essentially said is anything that happened after the Gueye foul on Marcelo didn’t happen. So, if Courtois took his boot off and with Icardi running towards him, he swung the studs at the Argentine’s head like Myles Garrett on Mason Rudolph, that would be forgotten and no red card? That’s a ridiculous example, of course, but if the red card to Courtois was rescinded, wouldn’t any other type of heinous act after the initial foul on Marcelo?

Tuchel's post-match is going to be must-see TV. https://t.co/EwqpmzJyBm

PSG is uniquely cursed by VAR as we saw last season against Manchester United. If UEFA and other governing bodies want to use technology to referee matches, they need to either go all in or all out.

You can’t have a man on the pitch refereeing the game and then someone in front of a screen overruling them. Right now, the laws in which VAR can be used are too broad. You shouldn’t be able to overrule a penalty decision and red card because of a foul that occurred at the halfway line. That’s absolute madness and UEFA is setting themselves up for criticism with this system in place.

Thankfully, PSG was able to find two late goals to draw level with Real Madrid but you have to wonder how different the game would have been if it went into halftime 1-1. Thanks, VAR for ruining our fun as usual.