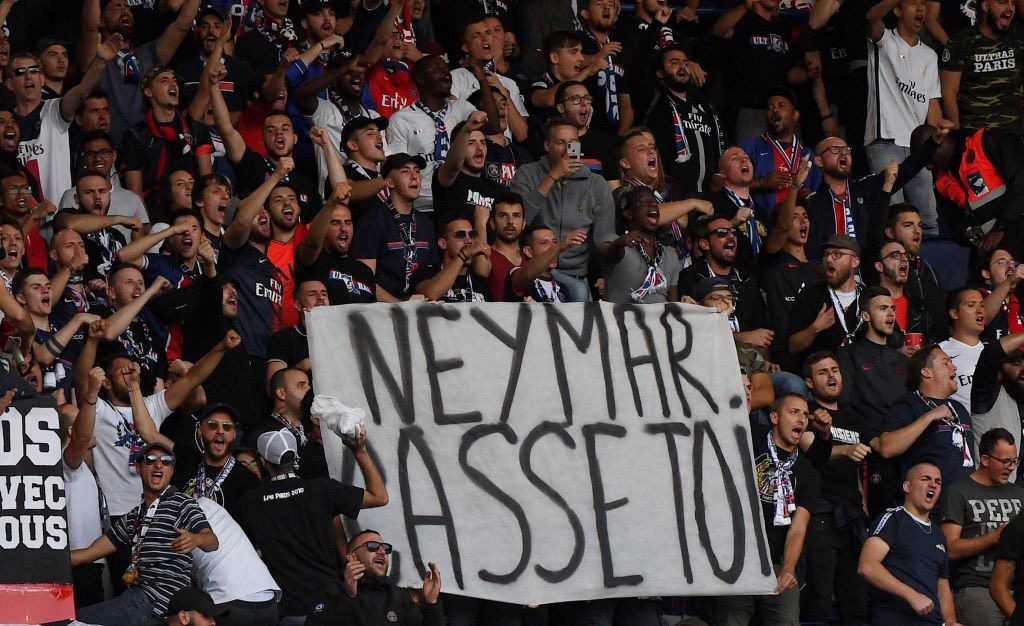 The first home match of the season is supposed to be a festive occasion full of optimism for the season ahead. The Ultras did create a raucous atmosphere as only they can as Nîmes Olympique visited the French capital, but they also had some choice words for Neymar who has reportedly been trying to force a transfer back to Spain all summer.

Neymar, who reportedly couldn’t be bothered to show up to the stadium to support his teammates, was the target of some pretty harsh chants from the Ultras as well as numerous banners essentially telling him to leave the club in a not so nice way.

The Neymar bashing took over the narrative throughout the match, which PSG went on to win 3-0 by the way. Phil Schoen and Ray Hudson called the match for beIN Sports USA and addressed the situation several times throughout the broadcast and speculated how it could be resolved. If anyone thought the Neymar saga could be swept under the rug and PSG could play out the season with no distractions, this surely dispelled that idea.

Not phased by what was going on in the stands and in the boardroom was Neymar’s teammates on the front line. Edinson Cavani, Kylian Mbappé, and Angel Di Maria all scored to secure the first three points of the season. It was a somewhat sluggish start from the reigning French champions and new signing Pablo Sarabia didn’t quite live up to his preseason hype. If Neymar is to be sold, PSG will need Sarabia to take a much larger role in creating scoring chances. No one expects him to be on the same level as the Brazilian but he has to be much better than he was against Nîmes.

The win was comfortable but there were several missed opportunities. Cavani missed his customary tap-in and even Mbappé missed on a couple of goal-scoring opportunities. It makes you wonder if the game would have been different if VAR didn’t award a soft penalty to PSG, which was converted by Cavani for the opening goal of the game. Marquinhos once again played as a defensive midfielder and is starting to make that position his own. Once Idrissa Gueye is fit, I’ll be curious to see how Thomas Tuchel shifts things around to accommodate the new signing while also getting the best out of Marquinhos. As good as he was, Marco Verratti was better. The Italy international roamed the middle of the park looking taking the ball of his opponent and springing the attack. His effort to win the ball back in PSG’s end of the pitch and quickly pick out a crucial pass that led to a goal is exactly why he is considered one of the best midfielders in the world

There was a lot to like from this match and some things that need improvement. Unfortunately, it was all overshadowed by Neymar. Until the Brazilian comes out and says he wants to stay at PSG and give his all, or, sporting director Leonardo finds a deal that makes sense for the club and ships him elsewhere, this will be a constant distraction. Talks of a transfer, likely to FC Barcelona, Real Madrid, or Juventus FC, are in advanced stages but this is not a deal that can be done overnight.

We’ll have more on the win against Nîmes, Neymar, and everything else making news in the world of Paris Saint-Germain on PSGTalk.com and on our podcast network.