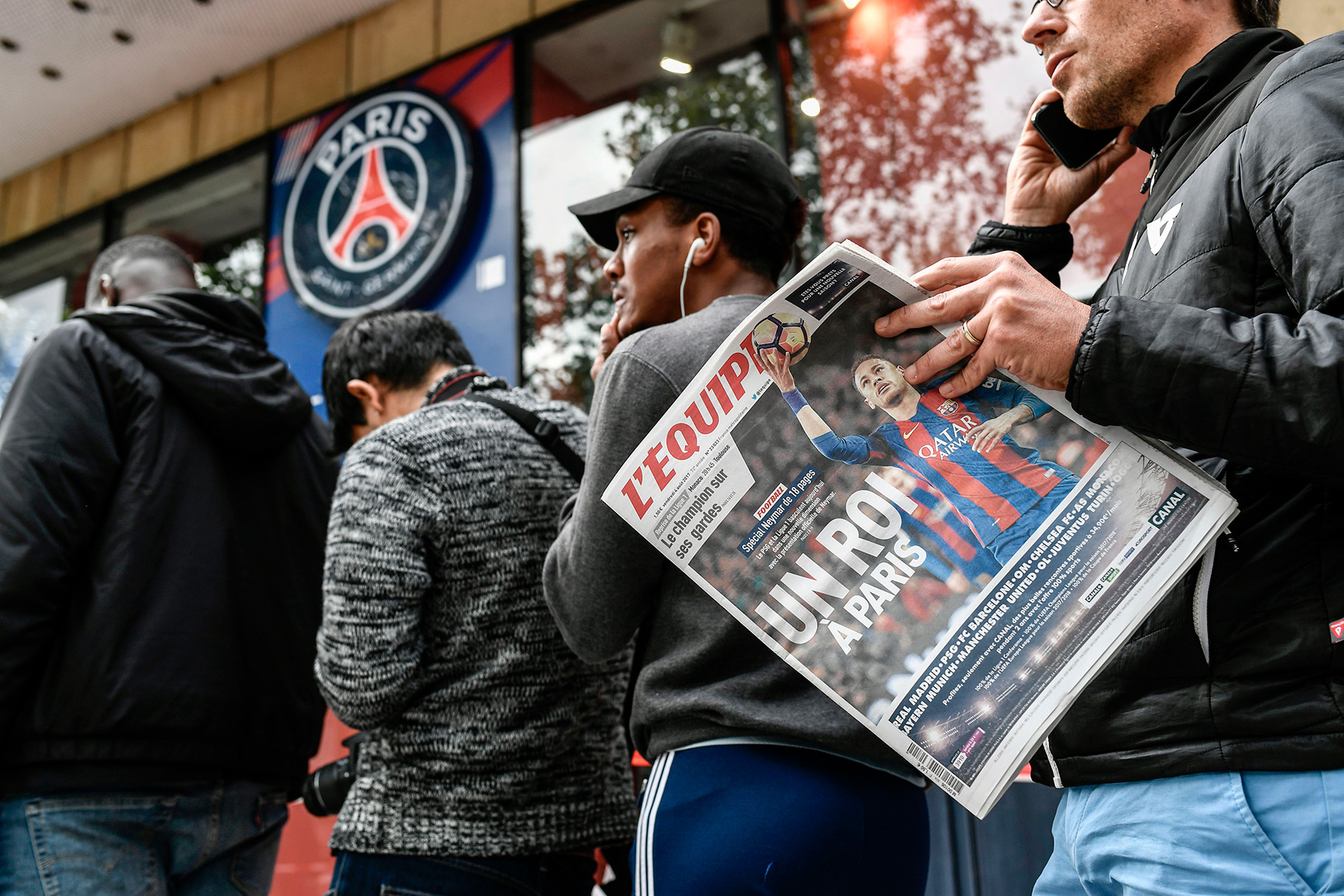 When your likeness and integrity is under fire, you begin to consciously operate outside of your comfort zone. Whether or not what’s being said about you is true is beside the point. The vulnerability tends to eat you alive and it becomes transparent to everyone that you have been shaken up.

How you choose to defend your entire existence being under scrutiny can be costly, but it can also be justified if you can speak for yourself to the masses without fear of victimization.

L’Equipe is a daily French newspaper that notably covers major sports such as football, rugby, motorsport, and cycling. You might have heard of them. They recently reported that Paris Saint-Germain would be forced to sell either Neymar Jr. or Kylian Mbappé in order to meet UEFA Financial Fair Play regulations. They also reported on match-fixing in a match against Red Star Belgrade in the UEFA Champions League group stages. The accusations were that of a Red Star executive placing bets through a network of accomplices, but L’Equipe reporting would have you believe that PSG was somehow culpable.

On December 17, 2018, L’Equipe reporters were denied entry into a press conference at PSG’s training center, the Camp des Loges. After a recent string of cavernous reports that could be detrimental to PSG, it seems as if the club has reached their point of no return. The timing of the decision suggests that L’Equipe‘s questionable reporting about the club needing to sell Neymar and Mbappé was indeed the triggering point—but it’s not quite that simple.

Sure, the New York Daily News can be a little harsh towards the local sports teams, and likewise for many other local print media publications across the world. It’s the unfiltered scathing truths that stem from those journalists emotional intelligence, which creates such wonderful content. With PSG and L’Equipe, it seems there is an authentic disdain between the two parties, and for the better part of their existences, PSG has been the Piñata at a birthday party, continuously taking a public relations beating.

Like a lot of the football media and French historians, since Qatar Sports Investments took over the club in 2011, L’Equipe has been taking digs at the capital club at every turn it seems. There is no coincidence that the same things that infuriate the anti-PSG groups are similar to the topics covered by the media company. Apparently, adopting the same methods that Manchester City, Bayern Munich, FC Barcelona, and Real Madrid used to place themselves amongst the elite in football should not be available to a club like PSG. The aforementioned clubs market themselves to attract the biggest stars in Europe, but only when PSG do it, and do it better I should add, is it perceived as the most despicable thing known to mankind.

No club in world football is more of a hotter commodity than Paris Saint-Germain at the moment. They have shaken up the football landscape and they refuse to keep knocking at the door for the gatekeepers to let them in. They’ve barged into the elite household unannounced and have made an executive decision that they are indeed amongst the top football clubs in the world, whether journalists like it or not. They have two of football’s biggest superstars on their roster, partnerships with globally recognized brands, and have finally appointed a manager in Thomas Tuchel, who has shown the ability to manifest on-the-pitch production that can make PSG a realistic threat to win the Champions League.

While Paris Saint-Germain is one of the heavily scrutinized clubs in the world, you would think L’Equipe, of all publications, would be at least fair in their reporting of the biggest club within their own country. Although it’s not their job to do so, it’s also a fallacy for them to be in the driver seat of the false narratives that eventually becomes a reader’s reality. When publications outside of France, such as the Daily Mail, AS, The Sun, and MARCA decide to cover PSG for the three times out of the year in which they do, they usually cite L’Equipe as their source.

As a writer, it should be easy to pick a side between a sports team and a publication because of the fundamental understanding of journalism and the task at hand. But, like most European football publications, they seem to pull weakly sourced stories out of thin air. The transfer window and rumor mill during the season are great examples of how publications drive traffic to their respective websites by creating false stories because football fans are generally thirsty to know which players their club will sign and whether or not a club they hate is under investigation.

To simply minimize this stance as “PSG is banning L’Equipe from their facilities because they don’t like what’s being reported,” is a bit inconclusive. The decision makes it look like PSG is only doing this because L’Equipe mentioned FFP, but it’s a multi-layered issue that essentially is a double-edged sword to both parties. PSG clearly aren’t bluffing as they have denied L’Equipe journalists entry for over two weeks now and the media company has too much pride to back off and accept any wrongdoing.

Although they would be reluctant to admit it, L’Equipe heavily depends on PSG for most of the clicks and revenue that their site generates. The same can’t be said about PSG, as social media plays a huge role in them being able to deliver their message to fans without having to rely on a publication to do it for them.

According to ESPN FC‘s Jonathan Johnson, the Union of French Sports Journalists has proposed mediation between PSG and L’Equipe. Besides this, there hasn’t been much more backlash to the decision made by the club other than L’Equipe themselves who put out a statement noting, “L’Equipe regrets the decision of PSG, but will continue to inform readers about the news of the Parisian club.”

Seemingly, the anger harvested over the years for PSG by newspapers has bled into their journalism. Before any important PSG match, it’s become a norm for supporters to expect a story from L’Equipe that implicates some form of wrongdoing by the Ligue 1 giants. Continuously writing false stories and expecting the red carpet treatment when you arrive at the Parc des Princes or Camp des Loges is a bit unbalanced and reveals the privilege the media company has. They are indeed the biggest sports publication in France, and many different publications cite them for their stories, whether said stories are factual or mere speculation masquerading as fact.

What’s undeniable is this: L’Equipe can’t abuse their privilege of access to PSG to drive false stories and claims about the club that they have a deep history with. A club that is marketing themselves in an unconventional fashion to that of the football world. It’s worth noting that PSG’s success will inevitably transfer to the success of other Ligue 1 teams and French publications such as L’Equipe.

Is L’Equipe within their rights as a media outlet to ask that their journalists are allowed to do their jobs without interference? Absolutely. Is PSG being petty to deny L’Equipe access to their facilities for the foreseeable future? No doubt about it. Two things can be true here, but it’s clear PSG has made the more impactful stance due to what they feel is unfair and false coverage of the team.

PSG has put out more press releases in the 2018 calendar year than I’ve ever seen during my time following the club, but denying entry to L’Equipe reveals the internal anger among PSG’s executives with the media outlet. The Football Leaks made some major claims about PSG in their “reports” and even with the level of damage those rumors potentially had, they loudly came and quietly went away. L’Equipe is held to a much higher standard by readers, and even PSG for that matter, so it’s expected for them to take a harder stance, even if it makes them look vulnerable.

L’Equipe or not, PSG is leaving themselves exposed to a potential public relations shit storm by blocking out any member of the media. It’s a thin line to walk on and it could backfire heavily if they haven’t thought out what they are to do following this refusal of allowing journalists into their facilities. I’m not even concluding that this is the right way to go about it, but once you continuously paint an ugly picture of a club, a person, or any entity, they’re within their individual rights to be as petty as they want.