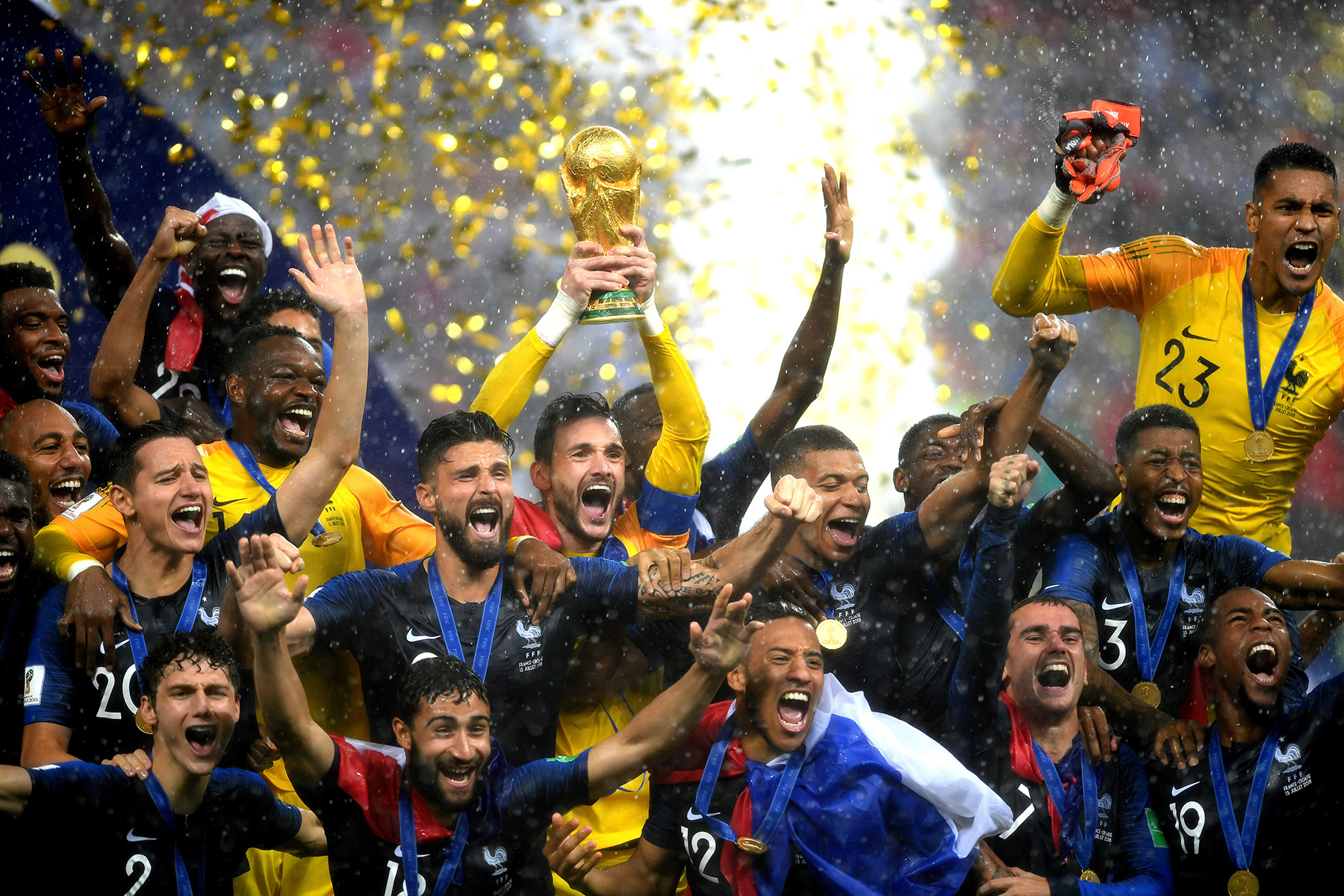 Twenty years after they first lifted the most prestigious trophy in team sports, the Equipe de France hoisted it for the second time as rain symbolically poured down in a kind of euphoric release. It’s a moment that will echo through the generations the same way it did the last time France won the FIFA World Cup in 1998. But, with this victory, France’s place as a top footballing nation is finally secured, being one of six teams in history to win the title on two seperate occasions. Many will draw similarities between ’98 and ’18 teams, however, no comparison is more spot on than the man who experienced and mastered them both: Didier Deschamps.

I’ll admit to being a skeptic of Deschamps as a tactical genius, but his greatest strength in life proved to be the crucial key to the championship run. It’s what so many other coaches and teams failed to master. France was not the most talented squad at the tournament, nor did they reach the highest peak of performance. In the end, it was Deschamps’ ruthless consistency that once instilled in these players made Les Blues unstoppable.

This was a team that was consistent at all stages throughout the competition. After a disjointed first half against Australia in the first game, off came Ousmane Dembélé and on came Olivier Giroud–a player that many (including myself) discarded as a burden on a France team looking to the future. This was the first moment where supporters misunderstood France. They didn’t need to be something different. They needed to be themselves, but a more consistent version of themselves. After two more uninspiring group stage matches, France landed in the top spot in Group C and I think it’s fair to say that accomplishment can be credited to their ability to make the least amount of mistakes and not playing their opposition off the pitch.

A team that did the ordinary well was a welcome sight in a tournament where other favorites like Germany and Spain couldn’t get out of their own way. Both teams through inconsistent lineups, uneven levels of play, and way too much lazy possession passed their way out of the World Cup much earlier than expected. This began to open the door for France, who were beginning to learn about who they were as a team.

And yes, while consistency is nice, you need a sprinkle of magic to win a major tournament. A lightning bolt through the clouds to stun and inspire. It came in the Round of 16 match against Argentina. Down 2-1 to another dysfunctional favorite, France appeared to be out of ideas. Argentina had a foot halfway in the quarter-final…until the 57th minute. The ball was crossed by Lucas Hernández and it bounced, then bounced again. That’s when the world stopped as Pavard sliced a peach with the outside of his foot, falling backward, into the side netting. France was tied and the tournament was forever changed. The wonder kid Kylian Mbappé scored two to put the game away, but honestly, at that point, it was more of a formality. Everyone knew Argentina didn’t have a chance to come back.

France would continue its consistent ways with a 2-0 victory over an Edinson Cavani-less Uruguay side in the quarter-final. The match was more a product of an experienced boxer picking apart an opponent with zero punch power behind his hands. A headed goal followed by a Fernando Muslera howler sealed Uruguay’s fate and to be honest, it was never really in doubt.

Then came the semi-finals where France’s consistency was put to the greatest test. Belgium, a team who had just vanquished tournament favorite Brazil in possibly the tournament’s best game, came out firing. France absorbed, re-calibrated, and just as the second half was beginning to cook, the burly FC Barcelona center-back Samuel Umtiti glanced a headed past Thibaut Courtois and gave Les Bleus the lead. Belgium tried to come back with cross after useless cross, but France’s consistently stout defense shut everything down.

Throughout this journey, the French players were true to who they were. Nobody tried to overextend and be the country’s personal hero. A team of supremely talented youth that understands their role is a rare but deadly combination. N’Golo Kanté ate up the middle, Paul Pogba facilitated, Antoine Griezmann provided the quality in the build-up, Grioud held up and positioned the attack, and Mbappé ran like a star-boy flashing across the sky. Not only were they consistent on the pitch, they were consistent in other areas as well. Presnel Kimpembe provided the music, and not a foul word was spoken to the media. That’s the way it should be. Oh, by the way, has anybody talked to Adrien Rabiot lately.?

Now the only thing standing between this France team and immortality was a stubbornly special Croatia side. One that during the final held 61 percent of the possession and at times looked like the superior squad. However, at no point during the onslaught did France bend or even blink for that matter. Sure, they got a bit lucky with the first half goals, but that luck was created by efficient counter-play in the face of Croatia’s effortless possession play. They made their own luck.

The second half featured some of the same, but the quality was all with the French. Strikes from Pogba and Mbappé sealed the second star. Even Hugo Lloris’ howler late in the game only provided a chuckle rather than a true moment of terror. The final whistle blew and the celebration began.

Back in July of 2016, France was in a similar situation. Cristiano Ronaldo had just limped off for Portugal in the UEFA Euro 2016 final. France now had the equivalent of a 5-foot putt to hoist their third European championship at the Stade de France. The next 90 minutes (plus stoppage time) was an exercise in offensive futility and mental frustration. It only took one strike from Eder to dash the French dreams that night. Sure, the team had young talent waiting in the wings and a bright future, but in that moment you had to wonder if France had just wasted the best opportunity this generation would ever have to win a major championship.

But, because Deschamps wouldn’t allow that to happen, here we are today. This team learned its lessons and realized that total buy-in was an absolute must. No more hesitation. No more questioning. Leave that to the pundits and stupid people like myself. This team never questioned and never doubted. Now, for the second time in history, France is the world champion.

As Lloris held the trophy high and his teammates dancing around him in a literal rainstorm it became clear that while destiny is a cliche it’s not a totally farcical concept. You create your own destiny, day-by-day, with the decisions you make or don’t make. In this case, France’s destiny was dictated by its unerring consistency. Forged by its leader, instilled into the players, and then etched into eternity.