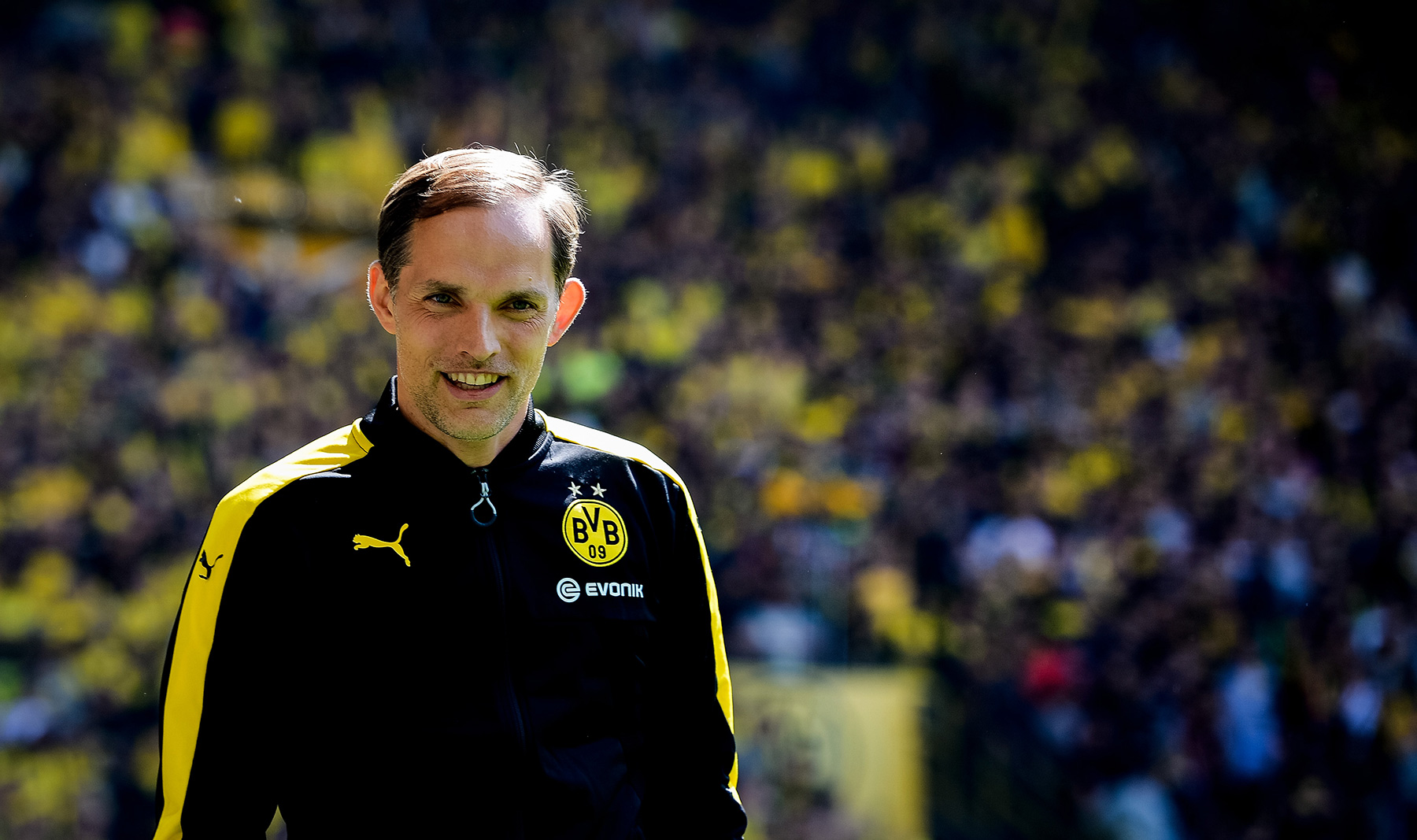 Save for Tyler Dunne, nobody I talked to had former Borussia Dortmund boss Thomas Tuchel pegged as the favorite (or even a candidate) to succeed Unai Emery at Paris Saint-Germain. Apparently, while the media chased Antonio Conte, Luis Enrique, and Mauricio Pochettino, PSG executives had already interviewed Tuchel and the German allegedly spoke fluent French during the meeting. Now, just a few days after Bild started the speculation, most major media outlets in France have come to the same conclusion. Usually, when multiple outlets converge around a story, there is a fire beneath the billowing smoke. There is a very good chance Tuchel will become the next manager of Paris Saint-Germain.

Why was this? While Tuchel had success at Dortmund it wasn’t spectacular. His tactics have been described as innovative but his people skills are somewhat primitive. He is known as a youth whisperer, but at PSG, he would be walking into a locker room full of entrenched veteran stars. Depending on who you ask, Tuchel is either the German Pep Guardiola with more upside, or the German Emery with less silverware. At this point, it’s hard to know exactly what to expect, or really what to think. Essentially, Tuchel is the antithesis of what people expected PSG’s next coaching hire to be. Experienced, trophies, ego management, Tuchel wouldn’t fall into any of these categories. The 44-year-old German is another gamble, a risk that at this fragile moment in the Qatar Sports Investments project could lead to a massive backfire. So why Tuchel?

Go back two seasons to when PSG won the domestic quadruple. PSG’s core group of players all had something in common. Thiago Silva, Thiago Motta, Zlatan Ibrahimovic, and Maxwell were all over 30-years-old. Edinson Cavani, Angel Di Maria, and Blaise Matuidi were all over 28-years-old. Javier Pastore was 27. Laurent Blanc had taken the team as far as it could go under his leadership. A change was needed to give the team the jolt it needed to finally get over the top. At that point, PSG needed to make a decision about who would lead the club. However, this is where PSG made the initial mistake. By stringing Blanc along, even extending his contract before firing him, they missed out on the candidates that would have made the immediate difference. By the time PSG got to the coaching buffet, Guardiola, Mourinho, and Conte were all gone. They also couldn’t convince Diego Simeone to leave Atlético Madrid at the peak of his powers.

So, the man from Basque Country, Unai Emery, was the last man standing. Not the ideal candidate but a competent tactician who had led a much less talented Sevilla FC squad to three consecutive UEFA Europa League championships. A man that had the upside to grow into the job and become an elite European manager. As the saying goes though, when a boy is learning to swim in the deep end, it is best not to fill the pool with sharks. A month into his tenure, PSG’s entrenched power structure consisting of the senior players quashed Emery’s tactical revolution and reduced him to a sideline cheerleader. As hard as he tried, he never fully recovered the locker room.

This was the downfall of Emery. A nice guy with great intentions who just didn’t understand the depth of the water he was swimming with, or whom he was swimming with. Call it naiveté, but the eternal babyface always thinks they can turn a negative into a positive. It didn’t help that he was saddled with former sporting director Patrick Kluivert who was out of his league. PSG’s disastrous transfer window during the summer of 2016 and the 6-1 defeat to FC Barcelona in the UEFA Champions League buried Emery dead. By the time he received Neymar Jr., Kylian Mbappé, and the more competent sporting director Antero Henrique, the situation was well beyond his control.

While PSG over the last two years has jettisoned David Luiz, Lucas Moura, Blaise Matuidi, and Serge Aurier, while retiring Maxwell to the executive suite, the turnover at PSG has been painfully slow. A team that two years ago desperately needed to get younger never really did. In the second match against Real Madrid in the Champions League, it was Motta, Silva, and Di Maria (all over 30) making up the core of the squad. A flashing neon sign that signified a lack of progression in the PSG project.

This all brings me to Tuchel. Despite what people want you to think, the Qatari’s are not foolish people. From afar they look at this squad and as businessmen, they know what needs to be done. A team of thirty-somethings on inflated wages does nobody any good. A team that has slowly built a formidable youth academy, which for years has churned out players for other teams does no one any good. However, on a more positive note, PSG now has the formidable young core of Neymar, Mbappé, Adrien Rabiot, Presnel Kimpembe, and Marquinhos. Alongside Giovanni Lo Celso, Julian Draxler, Timothy Weah, Thomas Meunier, and potentially Gonçalo Guedes once he returns from loan. Paris also has academy players like Yacine Adli, Lorenzo Calegari, Alec Georgen, who, due to lack of playing time, are in danger of slipping out from PSG’s grasp. All of these players that I just mentioned are 26-years-old or younger.

It’s clear that if Tuchel is hired, it’s what Qatar wants. As tempting as it may be to go with Conte, or Massimiliano Allegri, or Enrique and try and keep something resembling the status quo, it would not be what they think is needed. The more I think about it, the more obvious it becomes. What is needed is the cleansing that PSG in hindsight needed two seasons ago. Which means if your name is Pastore, Di Maria, Motta, Silva, Verratti, and yes, even Cavani, it’s time to start updating your CVs and looking for other teams in need of your services. Maybe not immediately, but if Tuchel is hired, the clock will be ticking.

Tuchel would have been brought in to do two things: The first of those things will be to develop PSG’s youth core of talented starlets. A job that Emery started, but was unable to bring completely to fruition. The second of those things will be to phase out the high-priced holdovers from the Ibrahimovic-era. This would not be a popular job, and in the end, may be the most important step in progressing PSG into the future. Tuchel would attempt the subtle and dangerous dance of rebuilding the squad through tactical retooling and heavy squad rotation, while still being competitive in Europe. This means at times, he would have to play the heel.

Tuchel would be to Qatar ownership what Luca Brasi was to Vito Corleone, and what Al Neri was to Michael Corleone. You would see Cavani’s playing time cut over time until he is only a bit player for the young stars of PSG’s Ferrari-like attack. You would also see that three-man center-back rotation become a two-man rotation. In time, you may even see Lo Celso take major minutes away from Verratti. Emery was too concerned with being the babyface to begin this process but Tuchel is not. The free agent manager has the German attitude of production over everything. Always looking forward and never looking back.

This also brings up the question of Neymar. Would the Brazilian star agree with this choice for manager? If the rumors are indeed true, Qatar has made the gamble that either Tuchel can sell himself to Neymar, or that in the long run, it is better to prepare for the long-term future over catering to the needs of its current biggest star.

Now, whether you agree with this assessment or not is beside the point. If PSG does hire Tuchel then this is clearly the assessment that the organization would have made. Tuchel would be brought in not to coach PSG as it is currently constructed, but coach a PSG side that he would have a heavy influence in constructing. A team that if Tuchel doesn’t win the ultimate prize, in two to three years, would be primed for a new manager that would have tools necessary to finally achieve the dream. This is the long game, one that the club had been accused of never playing. PSG have always been accused of sacrificing the future for the present. If they bring Tuchel to the French capital, that would no longer be the case.

Video: Di Maria Picks Up Second Assist of the Ligue 1 Season as Gueye Scores a Key Goal vs Montpellier
25 September 2021, 19:42
Follow Us