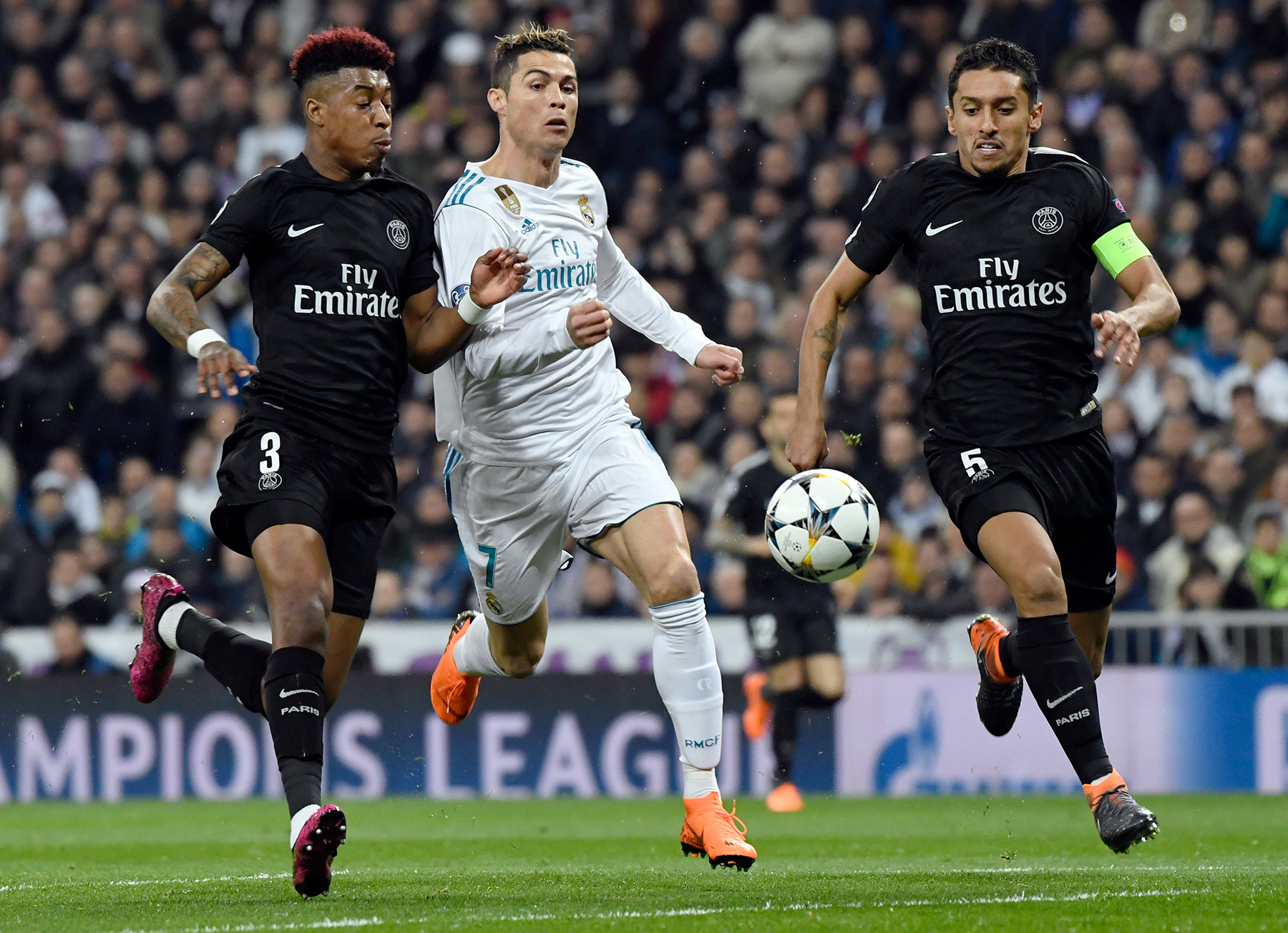 One of my biggest pet peeves about the current microwave-era, particularly in sports, is the notion of everything being quick and easy. From instant reactions that aren’t fully developed to events being quickly digested–and forgotten just as fast. It comes off as lazy from my perspective, but this is where the world is now in sports, music, film, politics, culture, etc. Now, just because the world around us is moving extremely fast doesn’t mean you have to get caught up in the shuffle. I am an advocate of individualistic thinking and moving at your own pace, because this way, you’re able to objectively absorb information–and as it pertains to the current times, you can appreciate things fully as they were prepared.

The association of my semi-philosophical inaugural paragraph and Paris Saint-Germain is at the heart of the team’s defense. There is a shift in the hierarchy at the center-back position–not only in terms of 23-year-old Marquinhos presumably taking over the captaincy from compatriot Thiago Silva, but also the PSG academy graduate Presnel Kimpembe taking Silva’s position as a regular starting in the center-back pairing. Given the fashion in which Les Parisiens have crashed out of the UEFA Champions League the last two seasons, one of the brighter notes for the side has been the superb rise of Kimpembe. The 22-year-old France international is uber-talented and doesn’t have an ounce of doubt in his glands. Widely recognized as one of the best young defenders in all of Europe, we can project Kimpembe will be a key figure for his club and country for years to come.

This is great news if you’re a supporter of Paris Saint-Germain and it gets you excited about the club’s future being in good hands, but you also must come to the realization of what position this puts Silva’s future in. This discernment I just laid out is logical in the sense of, “I understand Silva is one of the best pure central defenders in the world, but he is in the latter stages of his career and losing some of his athletic ability.” There also is the microwave sector of supporters, pundits, and people who call themselves journalists, who view this in a vacuum and only think Silva is standing in the way of Kimpembe and his talents. The argument is that the former AC Milan man is not a leader, he has come up small in big matches for club and country, along with other minimalistic impulsive takes. I’ve been critical of Silva for similar things as well, and those are fair arguments to make…to a degree.

Totality is important when you dissect an athlete, artist, politician or any individual for that matter. If we only examined NBA superstar LeBron James from his failures in the NBA Finals that would be unfair in grading his career in totality. James has played in eight NBA Finals and won three of them during his career. If I only judged him based on the five losses, many would call that being a hater or lunacy. During James’ rise, there was Kobe Bryant, who was aging and the American media started polls and created a diversion between sports fans to choose between: the elder Los Angeles Lakers legend, or, the impressive phenom who lived up to expectations from his rookie season.

Many people brought up Bryant’s ball-hogging tendencies, his reputation as a bad or unfriendly teammate, or that he wouldn’t be successful without former Lakers center Shaquille O’Neal–only to make their case as to why James was a better player or that he was on his way to be the best of the era–even though we all knew that part was inevitable. I make the point in trying to convey the mentality, more than the athletes I contrasted, to magnify how ridiculous it is to only judge one aspect of a player’s career that favors your personal narrative and not judge it in its totality. I’m also pointing out how ridiculous it is in sports, where people tend to play down one athlete only to uplift or make their case for another. I view these people in the purview of a man talking down another man, just to get with a woman. There is a code to that, and we should consider having a similar code as fans and particularly in sports journalism.

As this pertains to PSG, the fanbase, and the media that covers the club: you don’t have to be dismissive about Silva in order to be complementary of Kimpembe. In having that notion, you either don’t view things through separate lenses in terms of being objective in supporting the club, or you simply have a disdain for Silva and you want to be stubborn in your microwave way of thinking. If you chose to be impartial and look at the broader picture, you will see that the rise of Kimpembe is relatively connected to playing alongside Silva. As Unai Emery is surely on his way our of Paris at the end o fthe season, his center-back rotation of Silva, Marquinhos, and Kimpembe, although risky, played a significant role in this connection of Silva and the Frenchman’s rise. Likewise, in the risk factor of playing Giovani Lo Celso in the defensive midfield role–as this allowed the young Argentine a chance to play with the first team and helped him gain confidence in his maturation process.

Kimpembe’s coming out party to the world was during the 4-0 win over FC Barcelona last season in the Champions League. The PSG academy graduate stood out in what was his Champions League debut and bossed the “MSN” attack of Lionel Messi, Neymar Jr., and Luis Suárez. While this was the match that saw Kimpembe’s profile rise, this current season under Emery with him playing more minutes, the France international is proving that his performance in that Champions League match was no fluke. With 21 appearances in Ligue 1 so far, Kimpembe has performed relatively better in Ligue 1 when partnered with Silva. His average performance rating in Ligue 1, per WhoScored.com, when playing with Marquinhos is at 6.84 percent and with Silva at 7.10 percent. In the Ligue 1 leaders first loss of the season against RC Strasbourg Alsace, the center-back pairing was Marquinhos/Kimpembe.

This doesn’t essentially mean anything about Marquinhos, it only illustrates a simple thing when you strip everything down to its core. You tend to play better when there are experienced players on the pitch because their experience gives you cover and allows you to play a more comfortable match. Marquinhos, in a recent Instagram post, credited his rise and currently playing level to playing alongside his Brazilian teammate. It should be to no one’s surprise that the same thing is transitionally happening for Kimpembe, at a more accelerated rate, because he is getting game time next to both of PSG’s Brazilian center-backs. “KINGpembe” as the PSG fans on Twitter refer to him as, is an incredible defender and at the young age of 22, he is dominating his opponents at every turn.

His passing skills are nothing to sneeze at either. This aspect of his game is essential to what makes him such a dynamic defender. So far, in 31 appearances in all competitions, Kimpembe is averaging 61 passes per game at an impressive 94.6 percent accuracy rating. This dynamism, along with incredible performances this season from the Frenchman, is what’s accelerating the inevitable dropping of Silva–but don’t be so quick to discredit or essentially give a blind eye to Silva’s guidance to this acceleration. It’s OK to view things in their complete form rather than being impulsive. It’s OK to try and get the girl without trying to knock another man down in the process. I wasn’t lucky enough to watch Michael Jordan at his best because I was only a baby at the time, but I had the privilege of seeing Bryant and James in their prime and that’s been a pleasure.

Paris Saint-Germain is in crunch time as it pertains to the Qatar Sports Investments project, but the entire story has yet to be told. If you listen to the English-based media and the trolls on Twitter, they will tell you this project has failed. That would be viewing it in a bite-sized form and a joke really. If we look at the status of the club from when QSI came into the fold, it’s currently light years beyond that, and still growing. Definitely, from a branding standpoint, revenue generated, and attracting supporters. On the pitch, there is still more work to be done and the leadership of PSG is very aware of this. It’s apparent PSG need a different attitude in the dressing room and a fresh approach going forward, but to simply wipe away everything they have done to get to this point would be dangerous and essentially giving up on the project. Kimpembe represents the necessary attitude for Paris to advance in European competitions and will play a key role in achieving the elusive goal–just remember that you don’t have to ridicule any single person in acknowledging that.