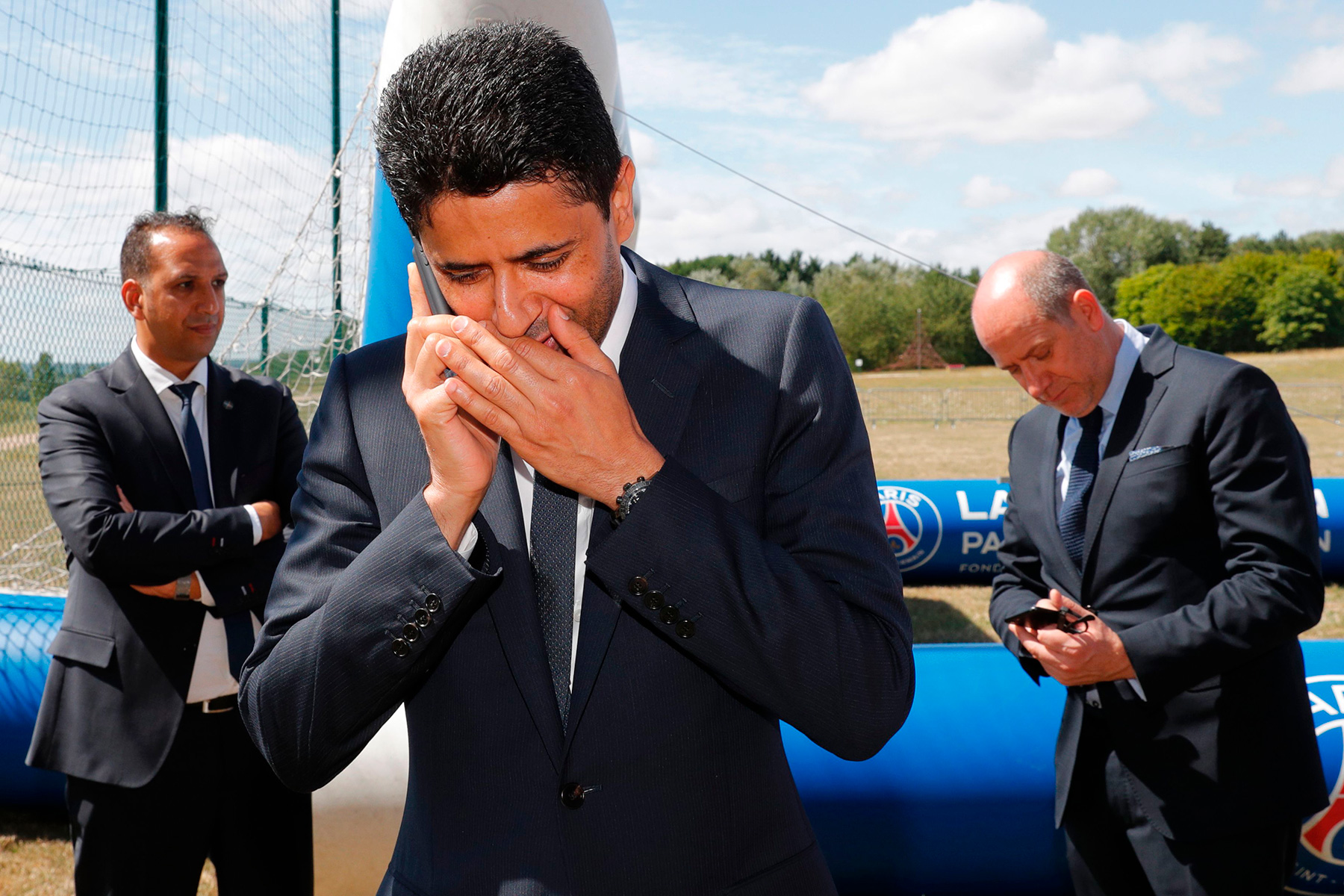 PSG Mercato
Everything You Need to Know About PSG and Financial Fair Play
By Louis - 3 September 2017, 4:35

Paris Saint-Germain chairman and chief executive officer Nasser Al-Khelaifi has just returned to Paris after a three-month tour of Europe with his bank on speed-dial. During the span of the summer transfer window, PSG managed to acquire the services of Yuri Berchiche, Dani Alves, Neymar Jr., and Kylian Mbappe, setting in stone their intent to finally bring the UEFA Champions League trophy to the Parc des Princes.

However, aside from FC Barcelona throwing a fit, many pundits and fans were quick to cry wolf and bring up the tricky subject of world football’s ultimate set of rules: Financial Fair Play. The subject remains profoundly and extensively misunderstood by the football community so I decided to look into the what, how, and why of FFP and whether or not PSG are in violation.

Financial Fair Play is neither about finance, nor about fair play, the latter being the biggest misconception. Even UEFA describe FFP as “improving the overall financial health of European club football” and when asked if they’re aiming to level the playing field, the answer is as simple as “The aim is to ensure that clubs invest in their future and stay true to the spirit of the game” (talk about politics).

How Does FFP Work?

That may sound very vague, but that’s exactly the point. To give a more concrete explanation, finance is the science of planning the distribution of business assets whereas accounting is the art of the recording and reporting financial transactions.

The specific UEFA rules are pretty clear on the matter: clubs can spend €30 million more than they earn in the three-year assessment period set by the Independent Club Financial Control Body–the guys who do all the due diligence, and investment in stadiums, training facilities, youth development, and women’s football doesn’t count as spending. That’s it.

From there on it gets a bit more complicated. Wealthy club owners often inject money into clubs but that doesn’t technically count as income, which primarily comes from match day, broadcasting, commercial, sponsorship, and transfer revenue. Owners like Manchester City’s City Football Group (operated by the Abu Dhabi United Group) tried to bend the rules by creating an exuberantly overpriced sponsorship deals between the club and a company to which they are related–Etihad Airways for example. UEFA have now made it clear that if they suspect a similar affair, they will investigate and eventually, if necessary, adapt the calculations of break-even result for the sponsorship revenues to the level which is appropriate according to market prices, and automatically consider any entity that represents more than 30 percent of the club’s total revenues as a related party.

To simplify it hypothetically, let’s imagine SV Werder Bremen were bought out by a foreign investment group who pumped money into the club. If Bremen, over three years, spent €120 million on transfers and other non-exempt expenditures, and made €100 million from legal sources (match day, broadcasting, commercial, sponsorship, and transfer revenue), they would be in compliance with FFP regulations. However, they would have breached FFP regulation if they earned less than €90 million from legal income sources (meaning they would have spent €30 million too much) or if more than €10 million of their income was from sponsorship deals directly related to their new owner. So, even if their new owner continually pumped money into the club, seemingly reversing all their expenditure, they would still have to earn their money legally.

Why Was FFP Set Up?

First approved in 2010, FFP was set up because many clubs were suddenly going bankrupt because of a massive miscalculation of future investment. The most memorable examples are FC Anzhi Makhachkala and Portsmouth FC. In the case of Anzhi, the Russian club was taken over in 2011 by a billionaire investor who had the immediate goal of winning the Russian league. He quintupled their budget overnight and signed Roberto Carlos, Mbark Boussoufa, Samuel Eto’o, Christopher Samba, and manager Guus Hiddink within a year but then suddenly left the club and took all his money with him when he realized his project had failed. Needless to say, with players on astronomical wages, the club sank into deep bankruptcy.

The example of Portsmouth is probably the more commonplace one, going from the UEFA Cup to the fourth tier of English football in just over four years. It turned out in 2010 the owner of the club, Balram Chainrai, had let the club fall into approximately £135 million of debt. He placed the club into administration, leading to the rapid fire sale of their high-earning players and their inevitable relegation to the English Football League Championship and despite attempted financial takeovers and mismanaged compensation packages, their fall from grace turned into utter embarrassment as they were demoted all the way down to English Football League Two.

While there are still many things to discuss about Financial Fair Play and some serious questions to be raised about its ability to do good in the world of football, it’s important to remember that Financial Fair play isn’t there to stop the creation of super clubs, it’s just there to make sure clubs stay financially solvent.

How Did PSG Do It?

After that lengthy explanation of FFP, you may have understandably come to the conclusion that there is no way in hell Al-Khelaifi and his band of lawyers managed to balance the books. Luckily for him, it’s starting to look like he did. Barely.

Before I begin to explain PSG and their financial dealings, I want to clarify that I’m not a financial expert and I don’t want to speculate too much about Paris Saint-Germain’s income nor will I attempt to use specific figures for transfer fees and player wages as they are both things the club has remained adamant on keeping private. I simply want to name the arguments supporting the assertion that PSG fulfilled Financial Fair Play requirements.

First, we can use PSG’s 2016 revenue profile as a first indication of what sort of money we’re dealing with. Keep in mind that this is the declared legal income of the club at the end of the 2016 financial year. The club declared a net revenue of approximately €521 million, 58 percent coming from commercial revenue, mainly sponsorship deals. At the moment, we know that the only sponsor linked to Qatar Sports Investment, PSG’s owner, is Aspire Academy, a relatively minor sponsor compared to Nike and Emirates (the later rumored to be dropped in favor of Qatar Airways in the coming season and the former rumored to be bidding for a newer and much larger sponsorship deal).

We can also assert that since 2012, the club’s revenue has risen at an average rate of 27 percent per year, so it’s almost certain to suspect that their 2017 net revenue will be higher than before, ranging between approximately €564 million and €660 million (very rough estimates) and that their Q2 2018 revenue will probably be higher than that.

In the case of Neymar Jr, as it was reported by many news outlets and FC Barcelona themselves, it was not Paris Saint-Germain who footed the bill, but rather Neymar’s lawyers, something that French sports lawyer Thierry Granturco argues is a loophole excluding the €222 million fee from PSG’s net spending.

In the case of Kylian Mbappé, it was widely confirmed that the deal was a one-year loan with an obligation to buy in 2018-19, something clubs often do to avoid having too much spending every year (ex: James Rodriguez to FC Bayern Munich and Juan Cuadrado to Juventus FC). Multiple sources have confirmed that this is a totally legitimate practice and that PSG will not be sanctioned specifically for the Mbappé deal. Furthermore, considering the CFCB only take yearly salary and paid bonuses into account, Mbappé’s official 2017-18 fee will probably settle around €30 million.

This is all important because the CFCB carry out FFP verification every three years, the next time being in 2018 between the 2017-18 and 2018-19 seasons. This means PSG not only have another year to sell if they realize their books aren’t quite balanced, but it also seems to make the Mbappé and Neymar deals completely legitimate.

While UEFA may have officially opened an investigation into Paris Saint-Germain, the French club’s press release expressing their surprise at UEFA’s choice is more and more understandable, with another year to go before the men in suits can roll into town. Les Parisiens helpfully pointed out that the club’s deputy CEO, Jean-Claude Blanc “met with UEFA experts for more than three hours […], where he demonstrated that the operations carried out with FC Barcelona and in progress at that time with AS Monaco followed the rules of Financial Fair Play for the financial year 2017-18”. So what will happen of the club? Only time will tell.