The 2017-18 Ligue 1 season has finally kicked off…that is, if you didn’t miss it after all the buzz and fanfare following Neymar Jr.’s official move to the French capital. The 2-0 win over newly promoted Amiens SC was more difficult than many expected but PSG’s full squad wasn’t available and many first team players are just getting into the rhythm of training. Plus, the transfer window hasn’t closed and we’re likely to see some movement before it does. However, all three of those factors are expected to gradually be rolled back as we ease back into football season.

With the illustrious signing of Neymar complete (alongside Yuri Berchiche and Dani Alves, of course), and no other players realistically on the horizon, it’s prime time to look at what lineup(s) Unai Emery will opt for in the upcoming campaign. I’ve chose to take this position-by-position, evaluating who should start and in what formation.

Between the inconsistent form of Kevin Trapp and the volatile form of Alphonse Areola, there’s no doubt as to who should start. While Areola has both talent and time at his disposal, he needs to slowly build his confidence, something ruined by playing far too few games last season. Areola will probably start in the Coupe de France and Coupe de la Ligue but otherwise it’s Trapp’s spot to lose.

If we start on the right, there’s plenty of competition, perhaps too much. Between arguably the world’s best right-back in Dani Alves, the prodigious talent of Thomas Meunier and the unpredictable character of Serge Aurier, it may not be hard to decide who’s starting (Alves), but it will be hard to balance out playing time for three players who require precious first-team minutes to advance. Ideally, Alves should start and Aurier should depart for greener pastures, paving the way for Meunier to take over from the senior Brazilian. Oh yes, and maybe Alec Georgen should get a few minutes, that is, if Emery hasn’t forgotten him.

In the middle, the question of choice isn’t hard. The question of depth, however, is. While Thiago Silva and Marquinhos seem to have their starting spots set in stone with Presnel Kimpembe as a very capable backup, there’s no other alternative. Kimpembe doesn’t offer enough competition and even if he did, there’s nobody behind him in the pecking order.

At left-back, with veteran Maxwell now involved off the pitch as assistant sporting director, Layvin Kurzawa is poised to take the position for himself and keep it that way, with Berchiche offering competition for the role and serving as a respectable backup just in case.

Now comes the hard part because, if you noticed, I stayed loyal to PSG playing a 4-at-the-back formation next season and avoiding any talk of a 3-4-3 or 3-5-2 or whatnot. This is mainly because Emery only has three central defenders he can utilize, but also because the club’s central midfielders shouldn’t be used in the roles necessary to make that formation work.

If we imagine that Emery is ideally going for a 4-2-3-1, then it seems logical to assume that Marco Verratti will assume his usual starting spot, accompanied by recent breakout talent Adrien Rabiot, both readily interchangeable with the other central midfielders in the squad. However, this is only on the condition that either Angel Di Maria is a consistent part of Emery’s plans (something I’ll get to later) or Javier Pastore stays fit for the entire season (something I reasonably doubt).

This means that, like last season, the Spaniard could aim for the traditional possession-based 4-3-3 with veteran Thiago Motta starting in the middle, or even Grzegorz Krychowiak (remember him?) in front of the defense. This all leaves Blaise Matuidi in a conundrum, but it’s something that has been lurking behind him for years alongside his gradual decline, meaning he’ll probably be sold sooner rather than later.

Regarding youngsters, you can expect Emery to experiment with Giovani Lo Celso between midfield and attack along with the prodigious Christopher Nkunku, who will be looking to put himself firmly on Emery’s radar just as Rabiot did last season. Then there is the question of what to do with Hatem Ben Arfa, who, quite frankly, just doesn’t fit. There’s no imaginable scenario where he’s in Emery’s plans and with good reasons.

First and foremost, Pastore is back. While that may not be for very long due to his history of injuries, he is in the best place to secure the spot behind the striker in Emery’s preferred 4-2-3-1 formation. Yet, with an injury always around the corner, it’s likely he won’t feature as regularly as we all hope. In that case, I’d place my bets on either a 4-3-3 with Neymar and Julian Draxler on the wings or a 4-2-3-1 with Neymar, Draxler, and Di Maria supporting Edinson Cavani.

Indeed, while there’s no doubt whatsoever that Neymar will start whenever and wherever possible, it’s likely that Di Maria will have a hard time proving himself faced with FIFA Confederations Cup winner Draxler. Hopefully this all will lead to healthy competition within the team, something desperately needed to establish PSG as a big European club.

Finally, in what is probably going to be the easiest decision for Emery all season long, there is no doubt that Cavani will start up front for Paris. While the question of his backup may still be hard to answer (although Gonçalo Guedes seems to be providing an answer of sorts), the goal scoring job won’t be advertised on the walls of the Parc des Princes any time soon.

With minimal injuries and a good amount of players in form, I’d put my money on Emery playing a 4-2-3-1 with Trapp, Alves, Silva, Marquinhos, Kurzawa, Verratti, Rabiot, Draxler, Pastore, Neymar, and Cavani. However, with Pastore’s fragility, I’d replace him with either Motta in a 4-3-3 or Di Maria, who would swap with Draxler to round out the front four. 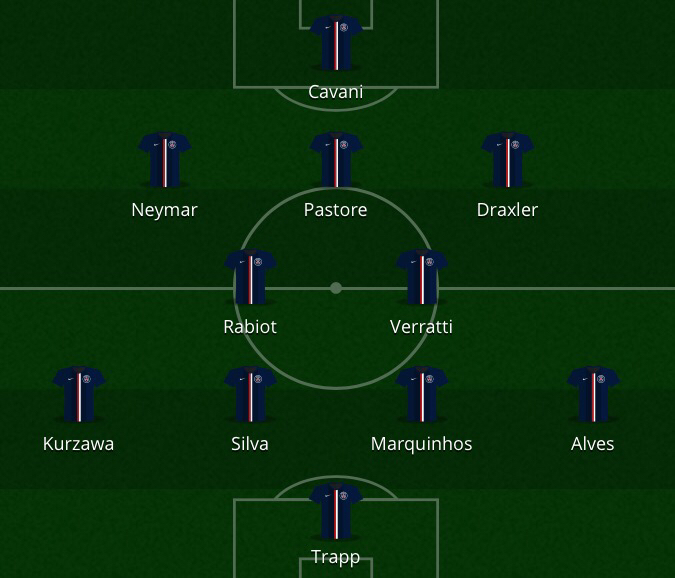 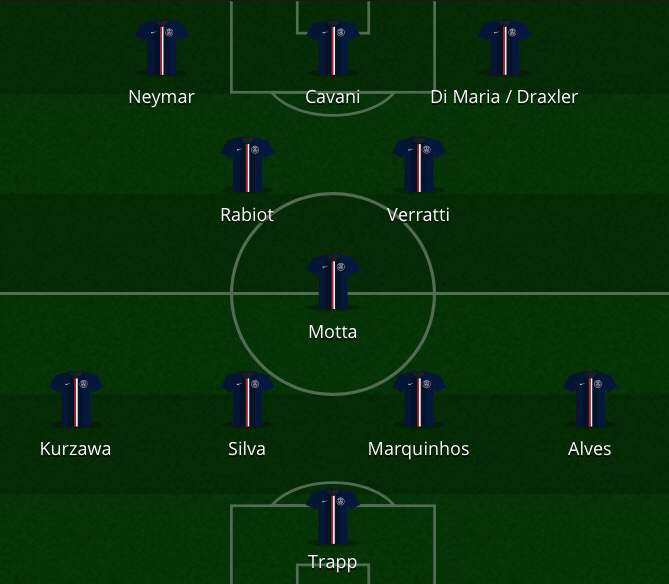 In any case, while PSG’s squad might need some tweaking and added depth, the midfield and attacking familiarity and strength look to give Les Parisiens the chance to finally become a European powerhouse.