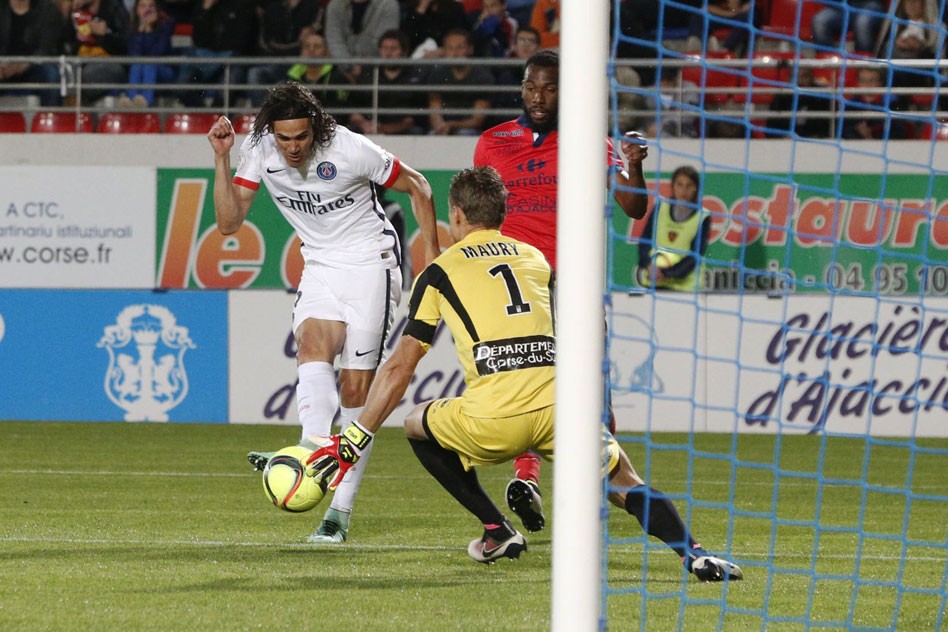 Edinson Cavani put on a clinic in Corsica scoring a hat trick and leading Paris Saint-Germain to a 4-0 victory over hosts Gazélec Ajaccio.

The league was wrapped up weeks ago but there was still plenty to celebrate after the final whistle. The win brought the French champions point total to 92, three more than their previous record set two seasons ago. They also set a goals record with 97, three more than rivals Olympique de Marseille scored in the 1970-71 season.

Ajaccio came into the match needing a result to stave off relegation but Cavani’s opener in the 13th minute removed any confidence Thierry Laurey’s team might have had. The newly-promoted side never recovered from the Uruguayan’s early strike and despite going into halftime down only a goal, a result seemed unlikely as Kevin Trapp went untested in the first 45 minutes.

Four minutes into the second half, Cavani scored his second goal with the sort of calm and composed finish supporters wish he showed more often. Angel Di Maria, who assisted on Cavani’s first, played in a superb ball at the back post and El Matador took care of the rest with a lovely first touch and an accurate strike past Clement Maury. Whatever hope Ajaccio had after the halftime adjustments were immediately crushed.

The third leading scorer in Ligue 1 scored his third goal of the game just before the hour mark. Cavani found himself unmarked in the box when Layvin Kurzawa whipped in a perfect cross. The former Napoli striker leaped in the air and his powerful header flew past a diving Maury.

Not one to be outdone, Zlatan Ibrahimovic—who was recently voted Ligue 1 Player of the Year—scored in the waning moments of the game. Maxwell’s pass through the center of the defense allowed the big Swede to go one-on-one with the keeper. PSG’s all-time leading scorer, who was mostly absent from the game, fired a shot on goal from just outside the 18-yard box and scored his 35 goal of the season. With two league games left, Ibrahimovic has a real chance of breaking Carlos Bianchi’s club record of 37 goals scored in the 1977-78 season.

Up next for Paris Saint-Germain is Laurent Blanc’s old team FC Girondins de Bordeaux on Wednesday at the Nouveau Stade de Bordeaux.

History Shows Why Lionel Messi Is Due for a Strong Run of Performances in Ligue 1
4 October 2021, 21:00
Follow Us