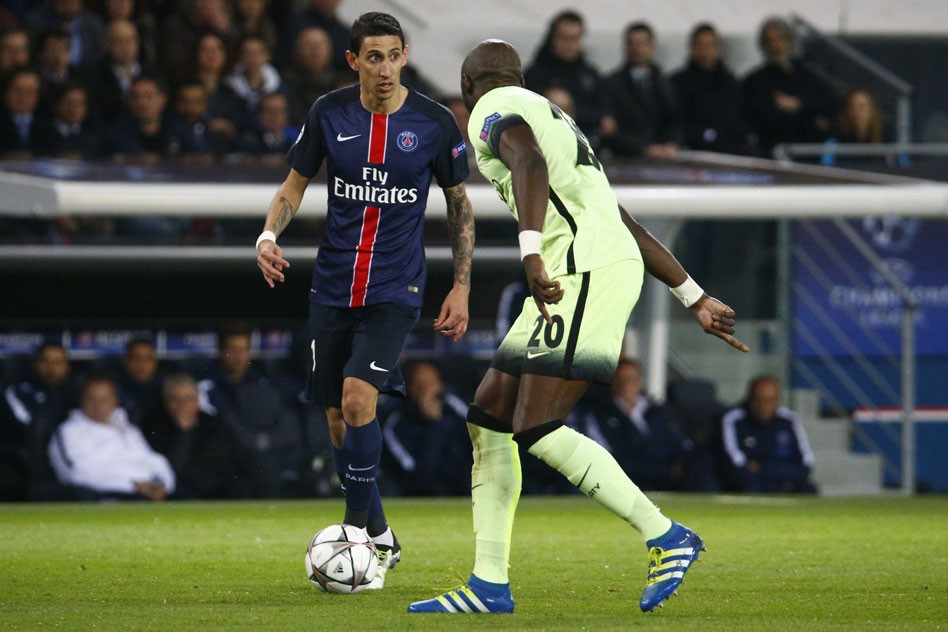 Paris Saint-Germain were frustratingly held to a 2-2 draw by a resilient Manchester City side in the quarterfinals of the UEFA Champions League on Wednesday. Despite 64 percent possession and 358 more completed passes, PSG’s lack of a cutting edge in attack and multiple mistakes by the defense allowed the visitors to get a dream result at the Parc des Princes.

Zlatan Ibrahimovic had an opportunity to open the scoring in the 14th minute when a penalty kick was awarded after David Luiz was brought down in the box. Unfortunately for PSG’s all-time leading scorer, Joe Hart was up to the challenge and saved the penalty. The big Swede would eventually get his goal in the 41st minute—three minutes after Kevin De Bruyne scored City’s first—thanks to Fernando’s comical error at the back.

Adrien Rabiot continued his impressive run in Marco Verratti’s absence with a goal in the 59th minute. Angel Di Maria whipped in a corner and Edinson Cavani was able to get his head onto the ball and direct it on goal. Thanks to an offside Ibrahimovic interfering with the play in front of Hart, Rabiot was able to slot the ball into an empty net.

Paris were unable to keep the damage to only one away goal and in the 72nd minute, Fernandinho fired a shot on goal past Kevin Trapp. You could hear the collective moan of the Parc faithful.

Manchester City’s efficiency saw them score two vital away goals and take with them a slight advantage to the Etihad Stadium in the return leg. Paris Saint-Germain looked far from their best and have it all to do if they want to prove they’re not just a team with grandeur delusions and reach the semifinals. Here is my “Good & Bad” from PSG vs. Manchester City:

Paris’s angel was one of the few players who showed up for the full 90 minutes. His rating of a 7.4 according to whoscored.com, second only to Zlatan’s 7.5, shows how vital the Argentine is to the Parisian attack. He was a constant threat to City’s makeshift defense and we saw the kind of havoc he can cause when he crossed a beauty of a pass for Ibrahimovic who headed the ball off the crossbar. If PSG are to advance to the semifinals, Di Maria will have to continue to be at his best.

One minute into the game, the Brazilian defender gave up a free kick in a dangerous position and picked up a caution for his troubles, meaning he’ll miss the return leg in Manchester. Not the ideal start for a player who came into the game struggling and many questioning whether Marquinhos should start in his place. Now that Luiz is suspended, we’ll have a chance to see his understudy in the biggest game of the season next week.

The Frenchman was rated the worst outfield player who started for PSG according to whoscored.com. Matuidi was poor offensively, contributing zero key passes, no shots on goal, and a mediocre 80 percent pass success. Defensively, he was even worse, winning only two aerial battles and recording two tackles. Unfortunately for PSG, Matuidi will also miss the second leg of the tie due to yellow card accumulation, which could be problematic as Blanc revealed after the game that Javier Pastore and Verratti will be unavailable for the trip to the Etihad. Blanc could get creative and move Di Maria to the midfield and start Lucas up front with Ibrahimovic and Cavani, or he could keep the attacking trio the same and start Benjamin Stambouli in the midfield.

There’s no doubt it was a rough night in Paris on Wednesday. Luiz and Matuidi will be suspended for the return leg, Pastore and Verratti will be out injured, and the team needs to overcome two away goals to advance to the semifinals of the Champions League. No one predicted this kind of carnage heading into the match and it serves as a cold reminder of how cruel this competition can be. If Blanc has any tricks up his sleeve, now is the time to use them.