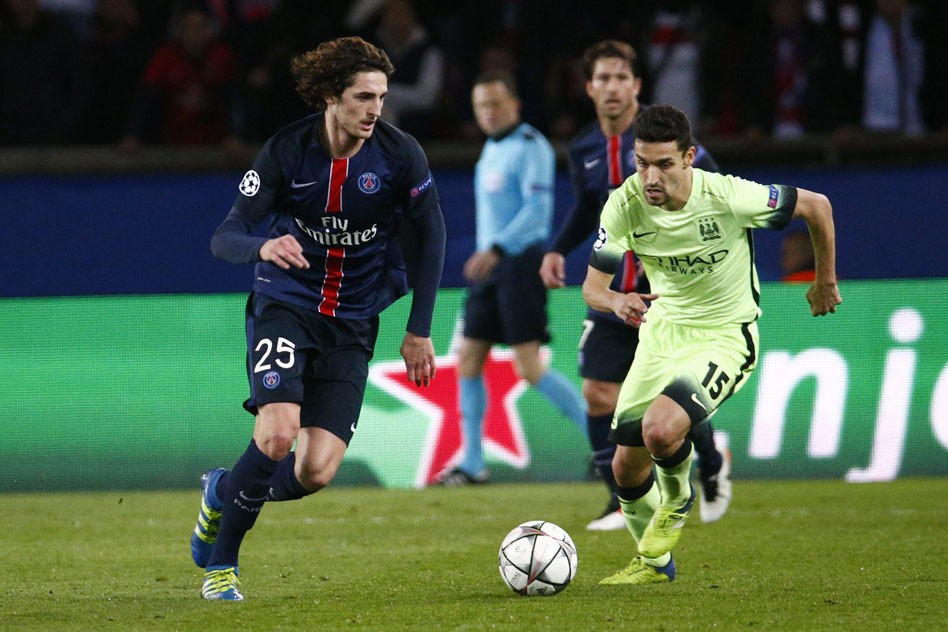 Paris Saint-Germain fans will be bitterly disappointed as a carnival of errors led to a 2-2 draw against a weakened Manchester City side in the UEFA Champions League on Wednesday night at the Parc des Princes.

It was a stunning performance from both sides, not because of its quality, but because of its sheer, unadulterated lack of it. Paris could have and should have scored more against City, whose disorganized defense frequently bled chances, and yet not only did they fail to score, they buckled and conceded the only clear-cut chances the visitors had all game. The absurdities over 90 minutes were almost impossible to count: David Luiz’s farcical yellow card (and perhaps that’s not harsh enough) put him out of the second leg just 12 seconds in, Fernando’s lapse in concentration gave Paris the pathetic lifeline they deserved, the Serbian referee made wanton mistakes on both ends, and, perhaps seeking to spare their viewer base, FOX Sports Go turned off the game midway through the first half. The Parc was a circus, home to a bizarre game with no rhythm until around 70 minutes as the entire Parisian squad gave up. So what happened?

H-1 Here is our line up to face Manchester City #PSGMCI pic.twitter.com/7zuALUzS2K

PSG fans had their first shock as they saw the starting XI. Manager Laurent Blanc’s decision to drop Lucas Moura in favor of Edinson Cavani and Marquinhos in favor of Serge Aurier (returning to the squad after two months out) certainly did not spell out disaster for Paris, but their appearances contributed to the disharmony. Despite generally good performances from both Aurier and Cavani, the general lack of continuity throughout the game stems from these two.

Let us compare mythologies here: Blanc’s tactical lineup consists of three lines. Four in defense, three in midfield, and three leading the attack. Standard formation conceptually— every club in the world consists of these broad divisions. Blanc’s midfield though is built around Thiago Motta’s role, which is the anchor that links the midfield and defense and allows the rest of the team freedom by virtue of being a marker on the pitch. Now, effectively, Blanc’s system relies on Marco Verratti to kick Motta into gear and allow him to properly absorb pressure, noting that the anchor is not necessarily the lowest man in midfield. What is less pronounced is the reliance on a similar system in attack; Zlatan Ibrahimovic fundamentally drops into the midfield to control the game, to play in his attacking partners, which is usually Cavani. The dual threat of Motta and Ibrahimovic is at the heart of Blanc’s transitional play, however, much like Verratti who is what makes this concept function in reality, Ibrahimovic’s tendency to drop deep can sometimes bog down the offense or leave Paris toothless if he lacks an outlet.

Pep Guardiola’s philosophy, the one that Blanc owes much of his style to, hinges around triangular play and constant outlets. When Cavani and Ibrahimovic play, this philosophy flies off the road. If the Swede finds the Uruguayan, the latter might mis-control or even more often (and less obvious), Cavani’s daring off-the-ball movement leaves the area he could have occupied for a simple one-two or lateral pass empty (or occupied by a wantonly out-of-position Blaise Matuidi). Unable to get the ball anywhere, Ibrahimovic is stranded in midfield and virtually useless. 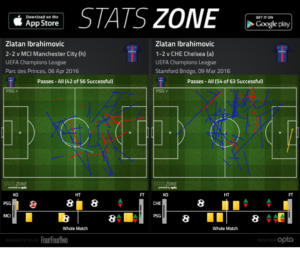 Lucas and Angel Di Maria have solved this issue. To make sure Ibrahimovic isn’t wasting possession and avoid turnovers, he doesn’t just need runners and targets, he needs help. As we saw against Chelsea at Stamford Bridge, Di Maria’s freedom and Lucas’ expertise in the dribble relieve the pressure on the main man. The Argentine happily floats across the pitch, always in position to receive a pass and take it forward or backward, keeping the attack alive no matter what. Lucas, meanwhile, serves as the perennial outlet, not just running in behind but frequently making difficult-to-track horizontal runs in support of other teammates. It should be telling that against Manchester City, the most passes Ibrahimovic received from one player was 10 from Motta, all of them from central positions as Ibra is forced to drop deep. That same stat doubles at Stamford Bridge, where PSG’s all-time leading scorer received 24 passes from Di Maria (including an assist), spread across the final third.

The conclusion is obvious: the more confined PSG’s no. 10 is, the worse his effect on the team, evidenced by a plethora of wasted, hopeful through passes into the box. The fact that Ibrahimovic was muted against an incredibly disorganized Manchester City defense is even more of a reflection of Blanc’s tactical failures. 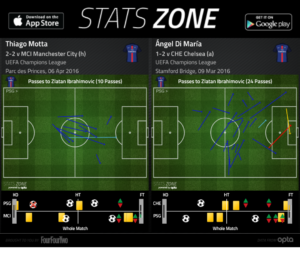 While his place in the starting XI was a surprise, Cavani did not play poorly, making a few decisive touches to divert the ball into dangerous areas (most notably for Matuidi’s penalty shout early on) and yet therein lies the issue: Unless Cavani develops compatriot Luis Suarez’ technical and physical abilities overnight, he simply doesn’t fit. Ostensibly, the Uruguayan was brought in to perhaps bully the City defense, to press the back line and help in midfield—yet none of this came to pass, only more oft-decried positional clashing with Matuidi and one major chance from a set piece that led to Adrien Rabiot’s goal.

Similarly, Aurier’s appearance was a disaster but not necessarily because of his actions on the pitch. In fact, the Ivorian played well for the majority of his 70 minutes on the pitch, winning more direct tackles than any PSG player and prevented counterattacks down his flank. While at fault for City’s equalizer, that comes down more to fatigue than unintelligence and that falls on Blanc’s shoulders. Starting a player who has not played with the first team in nearly two months, who has not even seen league play since his suspension, whose only rhythm comes from a few reserve games and international caps—starting this player over Marquinhos, who came off a stellar game against Chelsea, is negligence at best. It’s no surprise that the young Brazilian’s agent has begun to stir rumors of discontent once again. Blanc’s mistake here is one of man management. One struggles to understand the reasoning behind his Aurier/Marquinhos decision despite the undeniable quality in Aurier’s game.

Perhaps Aurier’s deployment hinged on a tactical shift in Di Maria’s role, which was far wider than normal, and undoubtedly done to accommodate Ibrahimovic and Cavani battling for central space. No one found El Fideo more than Aurier (12) and Maxwell (8) but this accomplished virtually nothing, save for starving the midfield of its greatest player from the victory over Chelsea. Again, this was ostensibly to accommodate Ibrahimovic—but what is a modern #10 if he’s not allowed to roam the pitch? Di Maria’s pass map comparison outlines this perfectly and is yet another clear blunder by Blanc. 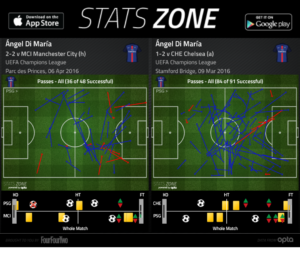 Despite the lion’s share of possession remaining in Paris’ hands, the midfield—deprived of Di Maria to join in a diamond formation, and with Zlatan wasting half his possessions—was easily the worst aspect of the Parisian game. So much of that terrible play comes from the factors listed above that it would be wasteful to repeat those reasons. Instead, one must realize just how atrocious the midfield was on its own. Motta played his usual game, in fact, it was one of the few bright and cohesive spots over the 90 minutes. Matuidi and Rabiot, however, simply were not there. Rabiot, to his credit, completed four successful take-ons and enjoyed a solid pass completion, but physically his game was lacking and all too often he chose the simple pass. That’s not fundamentally bad when other players exist to compensate for that short, recycling style of pass, but then no one else stepped up to take that role. As for Matuidi, words can hardly convey the game he had. Eighty percent pass completion, including just 47 of 59 short passes completed, zero crosses from four attempts, an incredible four of 10 duels won…it was a truly shocking performance from the Frenchman. It was hardly a surprise when he gave away the ball for City’s first goal. His performance was so bad that his suspension, due to yellow card accumulation, is hardly a concern to supporters. Gone is the heroic Blaisou of the extra time victory against Chelsea last year. His spirit lives on in Leicester City’s N’Golo Kante, a player Paris must surely look to if they wish to replace Matuidi this summer.

As always, Paris have no way to cope with opposition possession. After 70 minutes, the gas and desire departed and City were ceded possession entirely. The late additions of Lucas and Gregory van der Wiel did very little to improve the home side’s chances of qualifying, and ultimately the warm pre-game feelings gave way to deep frustration. Blanc has dug a hole for this team and it’s up to him to get out of it. On Tuesday, Paris go to the Etihad Stadium looking to salvage their Champions League run and despite a recent extension, Blanc’s job could (and should) be on the line.