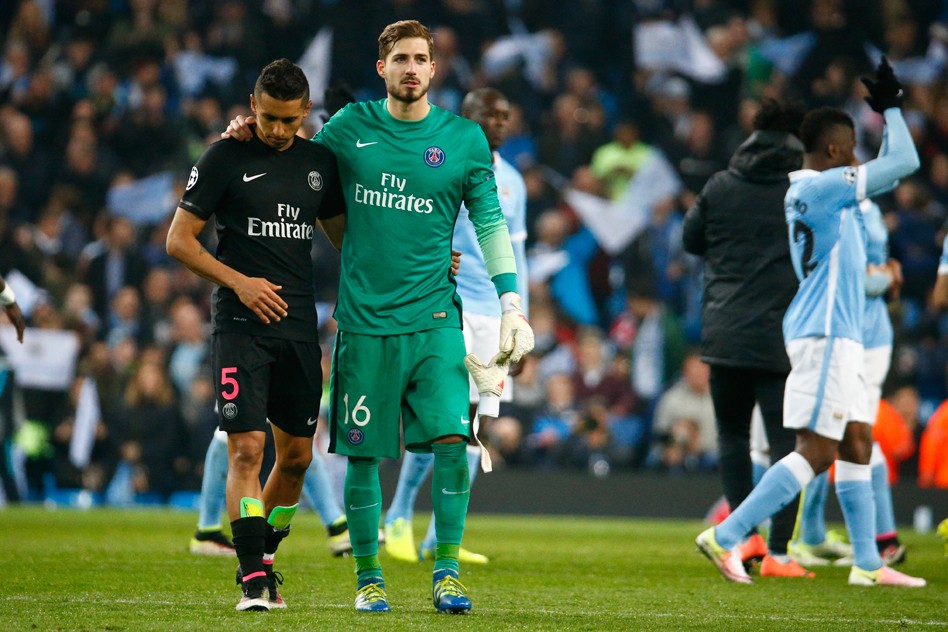 Needing a win at the Etihad Stadium against Manchester City on Tuesday night to advance to the semifinals of the UEFA Champions League, Paris Saint-Germain looked confused and uninspired. The French champions were eventually done in by a Kevin De Bruyne wonder strike in the second half and went on to lose the match 1-0 and 3-2 on aggregate—failing to reach the final four for the fourth year in a row.

Coming into the match, Paris knew they needed to be at their best and more importantly, they had to score goals as they gave up two away goals to City at the Parc des Princes. With Marco Verratti, Blaise Matuidi, and David Luiz unavailable due to injury and yellow card accumulation, Laurent Blanc took this as an opportunity to “surprise” everyone.

Opting for a 3-5-2 formation, Blanc deviated from his tried and true 4-3-3 for the first time all season. It was a bold move and I tweeted that it was either going to do really well or blow up spectacularly in his face…it was the latter.

The formation was entirely too defensive and Paris created next to nothing all night. Serge Aurier, who started at the back with Thiago Silva and Marquinhos, struggled throughout the match and you have to wonder if Blanc made the right decision putting him back in the squad so soon following his suspension. The Ivorian was at fault for City’s best scoring opportunity in the first half when he gave the ball away, forcing Kevin Trapp to trip a rushing Sergio Agüero in the box. The German keeper picked up a yellow card and a penalty kick was awarded. City’s lethal striker stepped up but placed his shot just wide of the net. Paris were thrown a lifeline.

The makeshift midfield, consisting of Maxwell and Gregory van der Wiel as wing-backs, Thiago Motta and Adrien Rabiot in the middle, and Angel Di Maria just in front of them, were able to maintain possession for large parts of the game but when it came to making a decisive pass, they failed to fuel Edinson Cavani and Zlatan Ibrahimovic. As halftime approached, PSG only managed one shot on target (via an Ibrahimovic freekick). The 3-5-2 formation was a disaster and to make matters even worse, Lucas Moura had to come on for Motta in the 44th minute as the Italian clutched his hamstring.

The introduction of Lucas changed the formation back to a 4-3-3, with Marquinhos falling back to his usual center-back position, but even that didn’t work. The Parisian attack was toothless against the much maligned City defense and it was sort of amazing how little PSG created with so much on the line.

I wish I could say Paris Saint-Germain mounted a valiant effort in the second half, pressing the ball and creating chance after chance, but the truth is, they were shockingly poor. Ibrahimovic had a freekick in the 48th minute from distance that forced a save from Joe Hart and Silva’s header in the 65th looked promising but the City keeper made the save comfortably. Despite four shots on target for PSG, they never looked likely to score whereas City only needed one shot on target to break through.

In the the 76th minute, De Bruyne’s eventual match winner confirmed the inevitable. Paris Saint-Germain were simply second best over the two legs and serious questions must now be asked of the manager, whose tactics are largely to blame for the result. Leading those questioning Blanc is PSG’s all-time leading scorer, who likely played his last Champions League match in a PSG shirt:

“In the first half we played with a new system and what happened, happened.”—Zlatan Ibrahimovic

While Blanc has received the backing of club president Nasser Al-Khelaifi and Silva, supporters are not as forgiving. The overwhelming message on social media after the loss was that Blanc must go in the summer. There will be plenty of time to analyze Blanc’s tenure at the club and whether or not PSG should go in a different direction but one thing is for sure, on April 12, 2016, it was the end of an era.

In a few months, we will likely see the departures of Ibrahimovic, Maxwell, van der Wiel, Salvatore Sirigu, and Cavani. Marquinhos has expressed his desire for more playing time and could potential force a move away from the Parc. Motta is aging and Aurier’s comments could land him on the transfer list as well. The team will look drastically different next season and it’s most famous player, and all-time leading scorer, will be elsewhere.

When Qatar Sports Investments took over in 2011, they laid out a plan to win the Champions League in five years. That plan has turned out to be a failure but the groundwork has been laid for future success. Verratti and Silva will anchor the team next season and the Qataris will flex their financial muscle this summer to replace those who depart. The team will be right in the thick of the competition next season and perhaps, with a bit of luck, they’ll bring the trophy to Paris.