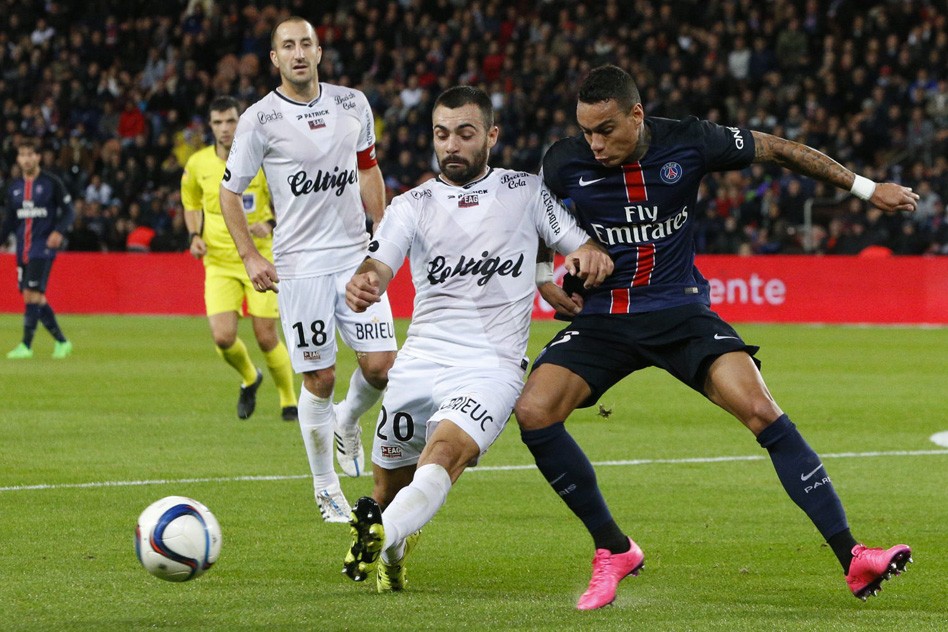 Match Preview
Guingamp vs. PSG Preview: Can Youth Get Paris Back on Track?
By PSG Talk Contributor - 9 April 2016, 5:18

Paris Saint-Germain return to Ligue 1 competition as they visit the Stade du Roudourou on Saturday to face 15th place (and 41 points back) EA Guingamp.

Following their abysmal midweek performance against Manchester City, a return to winning ways is needed. Securing three points might be more difficult for Laurent Blanc’s men as the hosts are in fine form, picking up seven out of a possible nine points in their last three Ligue 1 matches. PSG meanwhile, have only won two of their last five league games after starting the season undefeated.

Averaging 2.2 goals per game in their last five home matches, Guingamp have improved their offensive approach as the season comes to a close and should be able to test a shaky PSG defense. The French champions  meanwhile will look to continue their impressive scoring run, which has seen them score 3.4 goals in their last five away games. In the reverse fixture, Paris emerged 3-0 victors with goals from Zlatan Ibrahimovic, Javier Pastore, and Angel Di Maria.

Primarily focused on reaching the semifinals of the UEFA Champions League, Blanc will look to rest key players.

Against Guingamp, there will be a couple of new faces. But we’ll be going to Guingamp with a team capable of winning, the same way we do for every away game, with all the respect we have for our opponents.—Laurent Blanc, psg.fr

The absence of Marco Verratti and Pastore will continue for Saturday’s match, but the duo may return earlier than expected as Jonathan Johnson reported yesterday:

Laurent Blanc changes tune slightly on Marco Verratti & Javier Pastore's availability for PSG-MCFC next week. "There may be a small chance."

PSG will be without nine starters against Guingamp and the absence of key players from the squad allows for the inclusion of “Home Grown” players, which include: Hervin Ongenda, Jean-Kevin Augustin, Presnel Kimpembe, Christopher Nkunku, Kevin Rimane, Yakou Meite, Mamadou Doucoure, and Timothée Taufflieb. The average age for the team traveling to Guingamp is 22 years and 6 months.

After his return to the first team and understandably mediocre performance against Manchester City, Serge Aurier will look to redeem himself with good showing this weekend and work on his fitness. In his 19 matches so far this season, the Ivorian is Paris Saint-Germain’s fourth best player with an average rating of 7.79 (whoscored.com).

The spotlight may be on Aurier at the moment, but he’s not alone. Benjamin Stambouli, Lucas Moura, Adrien Rabiot, and Marquinhos are all in the squad for Saturday and could potentially play a large role at the Etihad Stadium in the pivotal return leg of PSG’s tie with Manchester City.

I expect Guingamp to provide a better challenge for PSG than in the reverse fixture. A depleted Paris Saint-Germain facing an improved Guingamp side who are impressive at home will produce a good match. Look for Marquinhos and Layvin Kurzawa attempt to solidify their positions in the starting lineup with impressive performances this weekend. Also, Christopher Nkunku and Jean-Kevin Augustin will look to impress in a bid for more game time as the season comes to a close.