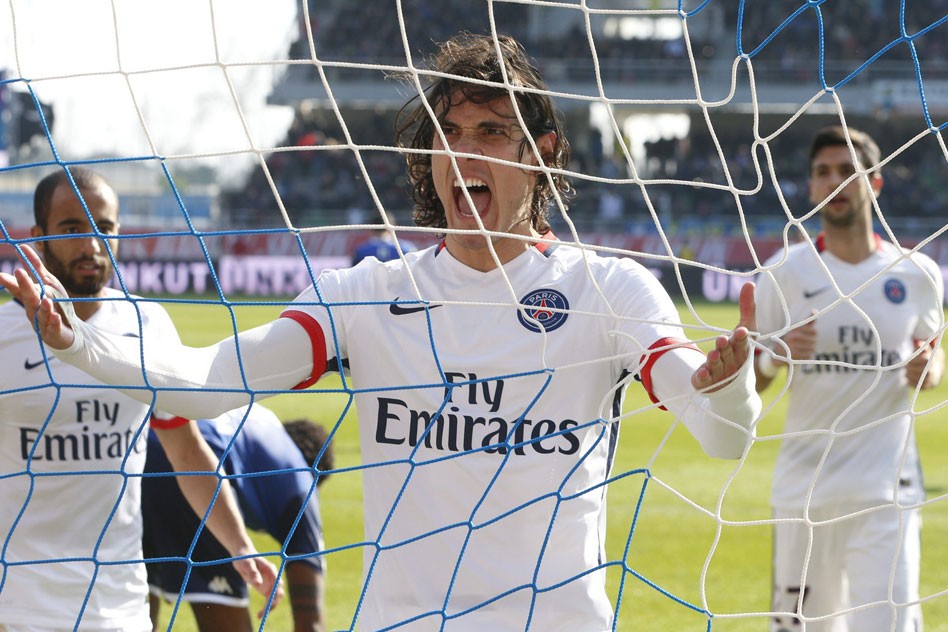 Laurent Blanc went with a strong starting lineup instead of giving game time to Presnel Kimpembe and Christopher Nkunku, which many thought he would do coming off a tough road victory against Chelsea F.C. Instead, Blanc chose the attacking  trio of Edinson Cavani, Zlatan Ibrahimovic, and Angel Di Maria, among other regular starters. At the back, Layvin Kurzawa started for Maxwell to inject even more pace into the team. It was clear from the beginning Blanc wanted to win the title decisively and that’s exactly what happened.

PSG pressed Troyes all over the pitch and overpowered the Ligue 1 bottom-dwellers. It was truly men against boys and the game was decided before halftime thanks to goals from Cavani, Javier Pastore, and Adrien Rabiot.

The first goal of the match came in the 13th minute and not even Cavani could make a mess of Matthieu Saunier’s gift.

An amazing combination of teamwork and skill from Ibrahimovic and Pastore extended the lead to 2-0.

A sublime pass over the top from Pastore presented Cavani with a great chance to extend the lead, but was saved by Matthieu Dreyer. The Troyes goalkeeper had no chance as Rabiot arrived to convert the rebound to make it 3-0.

Twenty seconds into the second half, Cavani picked up a loose pass and found Ibrahimovic who made it 4-0.

Moments later the big Swede would find himself on the end of a perfectly weighted Di Maria cross and finished with a bit of flair to make it 5-0 and record his 100th Ligue 1 goal.

In the 55th minute, Kurzawa found Zlatan outside the box who placed his shot past Dreyer to complete the hat trick and extend the lead to a stunning 6-0.

Saunier’s afternoon went from bad to worse as he scored an impressive own goal to make the score 7-0.

PSG were awarded a penalty in the 75th minute after Lossemy Karaboue brought Cavani down in the box. Karaboue received a red card for his effort and the Uruguayan stepped up to take the penalty kick. The shot was saved but thankfully for El Matador, the rebound came back to him and he finished calmly for his 14th of the Ligue 1 campaign.

A bit of magic from Zlatan in the 88th minute saw PSG’s all-time leading scorer record his fourth and final goal of the match to complete the 9-0 rout.

Aside from Ibrahimovic, the most impressive player for me was Stambouli surprisingly. The exact opposite of his recent performances, the Frenchman finished the match with 97 percent pass accuracy, three interceptions and nine ball recoveries.

The most enjoyable moment of the match I thought was the desire of the team to continue to score despite the huge lead. Ibrahimovic’s glare at a teammate when a pass wasn’t on point showed how hungry the team was to win the title in spectacular fashion and there was never a moment of complacency.

With the league officially won, all eyes turn to March 18 when the draw for the quarterfinals of the UEFA Champions League take place.