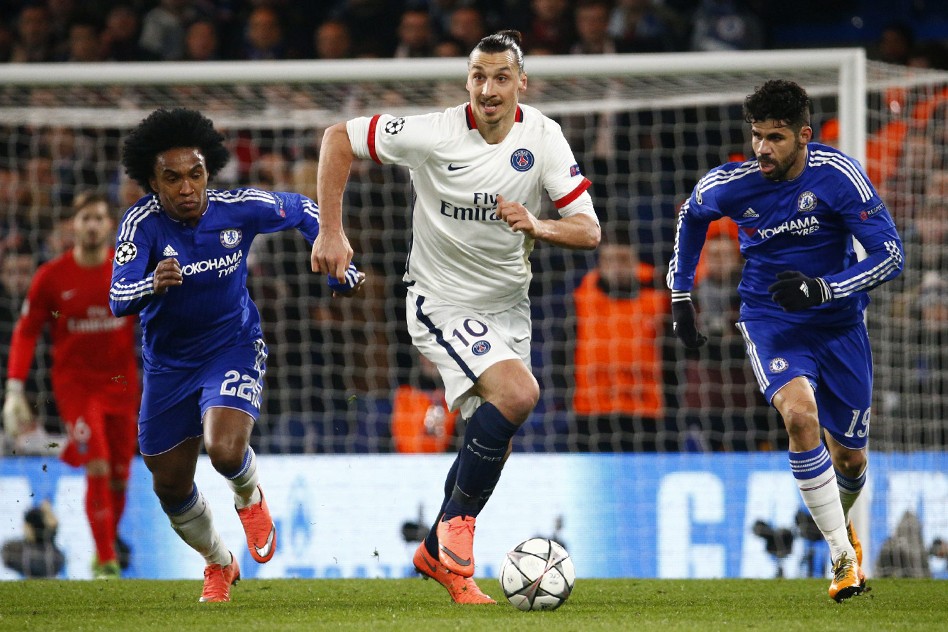 Paris Saint-Germain put a decisive end to the second leg of The New Classic as they ran out 2-1 winners at Stamford Bridge, earning a path into the quarterfinals of the UEFA Champions League and remaining the only team to beat Guus Hiddink’s Chelsea F.C. in nearly 20 games.

If the first leg was defined by a fluid, all-encompassing midfield battle, then the second was a perfect counterpart. Deprived of talisman Marco Verratti due to injury, Adrien Rabiot deputized alongside a partially unfit Blaise Matuidi and an out-of-form Thiago Motta. Indeed, with the attacking and defensive lineups virtually unchanged otherwise from the home leg, Parisian fans could only hope that their team would cope without the profound influence of the diminutive Italian. As shown by UEFA’s positional graphs, however, Laurent Blanc arranged his midfield in almost the exact same tactical position regardless of such a high-profile absence. Motta and Rabiot are virtually attached in terms of average position, much like Verratti would be; given that the lithe 20-year-old is easier to knock off the ball and a little worse with the ball at his feet, Blanc was forced to inject a creative presence into midfield from elsewhere. In most circumstances, Zlatan Ibrahimovic would fill this role, but this time it would be Angel Di Maria who would fully exploit the No. 10 space while Zlatan influenced the game from wider areas along with the exceptional Lucas Moura. As both goals showed, this would be a key tactical moment—but first, one must look at how the midfield actually coped. 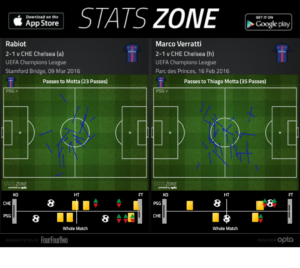 Rabiot and Motta formed a capable, if not perfect, partnership

Rabiot was superb, bringing composure and panache to a midfield sorely lacking in either at any given moment. His stupendous showing exposes a few faults in Thiago Motta, recently harshly exposed against Lyon, who still has all the vision and intelligence in the pass as ever but has slowed in terms of physically coping with the match ahead of him. His worst enemy is a hard press, unless he has Verratti alongside to relieve him in tight spaces. Rabiot cannot offer that—no one but Il Gufetto can, really—but the Frenchman’s eight completed tackles on the night show a surprising level of physicality and desire that add to his composure on the ball. The contrast between the anchor man and the youngster can be observed somewhat in the buildup to Diego Costa’s equalizer, where Motta’s miscontrolling of a driven pass across midfield is exploited far too easily by Chelsea’s pressing game.

That wide pass was a trademark error throughout the 90 minutes. Noting the pass map above, one can see that Verratti trades short passes with his midfield partner, preferring to minimize the risk of having to put Motta in that situation. Certainly Rabiot is not faultless—frequently he draws a little too far, and that even accidentally led to Ibrahimovic’s goal—but when the entire system revolves around a player like Motta to recycle possession, one must rely on some degree of physical and technical ability. Barcelona’s Sergio Busquets, undoubtedly the best in the world at this role, is arguably the most technically gifted of Barcelona’s entire midfield; even in Ligue 1, former Real Madrid man Lassana Diara combines intelligent passing with surprising strength and ball retention. Paris’ No. 8 is far from a liability, and indeed he is still the key to the system, but at this point the club must look to replace him in the long term. Many will claim that Rabiot has the perfect skill set for such a role but he has yet to be fully utilized there. He’s certainly more suited to it than Verratti though. One must imagine he will get a run out at some point.

Perhaps this has all been unduly harsh on Thiago Motta, who by all means did not have a bad game. His 92 percent pass completion did not disappoint, particularly the exquisite first-time through ball for Di Maria in the buildup to Ibrahimovic’s goal. Most of the criticism is simply as a result of the burden placed on a No. 6 in Blanc’s possession-hungry system. Indeed he was better off than Blaise Matuidi, who despite completing 77 passes on the night, cut a very anonymous figure. He was a certainty to start—no one is paying to see Benjamin Stambouli set foot in such a high-profile game—but nevertheless showed his fatigue, rushed out to play after picking up a knock just last week. He was nervous on the ball at times, failing to complete a single dribble and, with only one completed tackle, failed to defensively compensate for his lack of offensive presence. That said, despite a fairly one-dimensional showing, one can hardly criticize Blaisou, who was quite possibly assisted by pain-killing injections—never a great way to play, as shown by Ibrahimovic’s form in the first half of last season.

Chelsea threatened more in this leg, undoubtedly, but not with the extensive possession play that they pulled off at the Parc. The threat they offered at home was an incisive, pacey sort, and one carried almost exclusively through the outlets of Diego Costa and Willian. Pedro offered a usual pressing outlet on the right wing, and Willian looked to bomb forward almost every time he had the ball. The key to Chelsea’s mounting momentum in the match was relentless pressing, which began in earnest around the twentieth minute. PSG were content in some part to absorb pressure, owing a lot to great defensive work from Thiago Silva, but what really made Chelsea dangerous on the night was the presence of Costa. Willian was a danger, but would have been nothing if he did not have the Spain international to aim at. Costa did virtually everything for his team—constantly pressured the back line, twice had the ball in the back of the net albeit from offside positions, won the ball back in midfield to start an attack and then charged back to spearhead that same move. It was a complete performance and a deserved goal, no matter how widely despised the former Atletico Madrid man may be. His injury in the 59th minute essentially murdered the game, unfortunate though that may be after a cracking first hour. PSG must work on their defending—the quality is there in the team, but if Motta is bypassed, they seem much nervier than they ought to be. 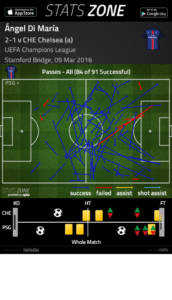 El Fideo influential across the pitch

Interestingly enough there were periods where Chelsea abandoned the pressing game and deliberately sat off of Paris by looking to pack their own half, including early on as Rabiot bagged his goal. Blanc—who has spent most of his career in the capital beating parked buses—was clearly most content in these moments, when Les Parisiens could come to life with quick, one-touch football. Paris being allowed possession is nothing new, but the team has grown leaps and bounds since the turgid group stage display at home against Real Madrid. Key to this is Di Maria moving inside, playing essentially as a roaming attacking midfielder, and Ibrahimovic—somehow at peak physical condition at age 34—playing comfortably up front. Both offer a roaming, difficult-to-mark outlet in central and wide areas, both are exceptional at holdup play and can beat a man; what’s most impressive is that Blanc manages to balance the two of them consistently. No player made more attacking third passes than Di Maria (23/28), whereas Ibrahimovic saw as much of goal (4 shots) as Diego Costa did.

That attacking synergy would not have been possible without the hard work of Lucas Moura. While he may be overlooked statistically, his efforts in the final third were sublime—in fact it’s difficult to name another instance in which the Brazilian has had such a complete performance against a top side. His zero shots are a product of his role—not confined to either wing, he won the ball back five times in the opposing half and successfully dribbled exactly as much as Willian. A great cutback from the touchline produced a wonderful chance for Zlatan Ibrahimovic, and a run straight through the Chelsea defense created a wonderful opportunity for Di Maria. This is surely a landmark game—Edinson Cavani had enjoyed some goalscoring form in the run-up to this fixture, but the Uruguayan was ultimately dropped. Here is the moment that Lucas has waited for, and while he may not have grabbed the headlines, he was vital and decisive with nearly all of his touches.

Another quietly brilliant performance came from makeshift right-back Marquinhos, who enjoys a starting berth in lieu of the suspended Serge Aurier. His place in the UEFA team of the week is well-earned, given that he was arguably the weakest link during the home leg. The 21-year-old (isn’t that mad?), a center-back by trade, was fundamentally off the pace during Chelsea’s 2-1 loss at the Parc des Princes; he was inserted essentially as a straight swap for marauding Aurier while lacking the essential skill set. As such, in the first 45 minutes of that fixture, attacks would fizzle out down the right wing repeatedly, with the young Brazilian almost refusing to run onto loose balls past his own half. 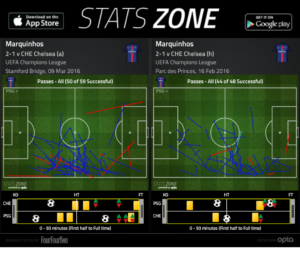 Here, the youngster was far more intelligently utilized by Blanc. Di Maria was brought off the wing entirely to let Paris build from the middle of the pitch, leading to Marquinhos operating in midfield—a similar role, in fact, to the one Maxwell often plays when paired with the more attack-minded Aurier. Marqui attempted the overlap only in extremely rare circumstances, but was also not limited to the backpass—his role in recycling possession was as important as anyone else’s in the team, and his defensive work was brilliant as always. Indeed, as Maxwell often found himself running down the length of the pitch, it seems that the two Brazilian full-backs simply switched roles for a day. Frankly, though, he was incredibly solid—this is a ball-playing position that suits the youngster well, and as he searches for playing time, the manager should look to make use of his talents alongside a more bombastic wing-back such as Layvin Kurzawa.

Just interviewed Nasser Al-Khelaifi, the PSG -president/owner:
Saying: – Will talk with talk to Zlatan's agent soon. Want to keep him

At the end of the day, though, who else could be Man of the Match but Zlatan? Such an award, difficult as it might be to give out, would be absolutely deserved for the big Swede. As Paris Saint-Germain head into the quarterfinals of the Champions League for a record fourth consecutive time, the narrative increasingly lends itself to a swan song for the man who has so transformed his club. He is in unbelievable form—30 goals in 31 games—and this time it comes with no asterisks, no qualifiers, no dodgy penalties or generally poor play. At 34, the stars have finally aligned for Ibrahimovic. This could be his year. Earning Paris its first Champions League; now that would cement his place in the pantheon of European greats. It would be an event that would surely even bring the near-catatonic Martin Tyler to his feet.

(And even if he doesn’t win it, Zlatan’s earned a new contract. Hopefully the allure of the Premier League isn’t too much for him.)

With Monaco's 2-2 draw vs. Reims, PSG can clinch their 4th straight @Ligue1_ENG title with a win Sunday at Troyes!! pic.twitter.com/qDjeKPUOjp

For now, Paris (and Parisian faithful) must keep those butterflies contained in their stomachs. It’s back to Ligue 1 on Sunday, and Monaco’s most recent result means a win away at bottom-placed Troyes, who have 2 wins from 29 and the worst defensive record in the league, will be enough to clinch the title in mid-March. Perhaps Les Parisiens will look to win the title in style, but for the rest of the season, domestic bouts will likely be sleepy, rotated affairs—so enjoy this last one while you can.